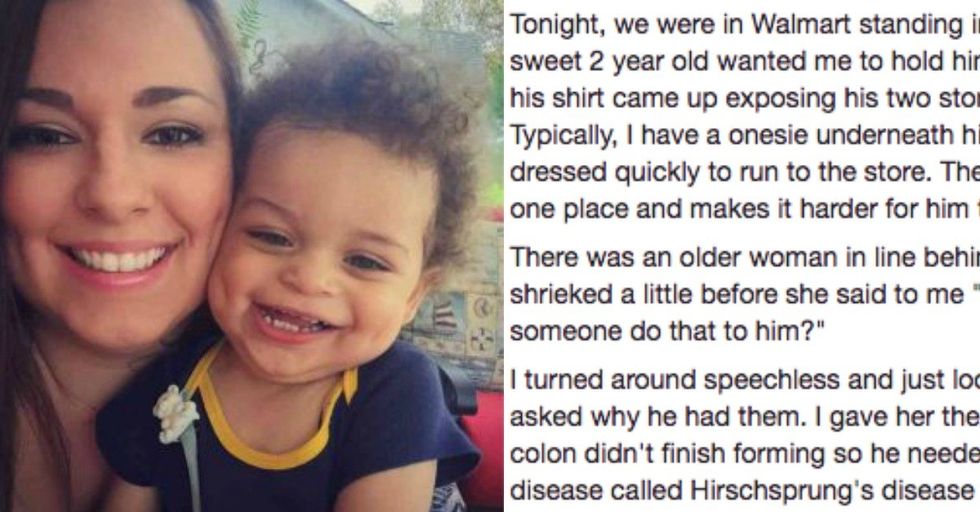 I will never understand what causes complete strangers to loudly voice their ignorant opinions at people who are simply going about their own business, and this is especially true when children were involved.

Someone who can relate all too well is Dallas Lynn, who was in Walmart with her two-year-old son, Jameus.

This cute little dude has had over twenty surgeries and suffers from Hirschsprung’s disease, a condition that affects the large intestines.

As a result, he has two colostomy bags for collecting the waste that his body expels. That's an important detail, because while Dallas was in line to checkout, Jameus decided that he wanted to be held, so she picked him up. When she did so, his shirt rolled up revealing colostomy bags.

As she recounted on Facebook, an older woman in line behind her caught a glimpse and shrieked a little before she said, "Why in the world would you let someone do that to him?"

"I turned around speechless and just looked at her before she continued and asked why he had them," she wrote. "I gave her the short version and basically said 'his colon didn't finish forming so he needed them.'"

"I left out that he had a rare disease called Hirschsprung's disease because I was a little annoyed from her first statement," she continued.

"She then goes, 'Well, I am sorry but I just think that is so 'repulsing', can you please keep his shirt down?' At this point I just wanted to shake this woman and scream, 'What is wrong with you?!' But instead, I told her to have a good night and went to another line."

“So now I’m sharing this picture, because there is nothing repulsive about my son," she wrote.

"Stomas and ostomies seem to be a taboo, when in reality, over 500,00 Americans have one. My sons disease may be rare, but his stomas are not," she added. The stomas that appeared "repulsing" to the woman in line are what saved her little boys life. “There is a very good chance he will have these for the rest of his life and if he does, it will be my job to teach him a positive body image," she concluded. "It will be my job to teach him to love himself, and his bags. Please be kind and choose your words wisely."

More than 26,000 people shared her post, and thousands left comments of support — and even shared their own stories.