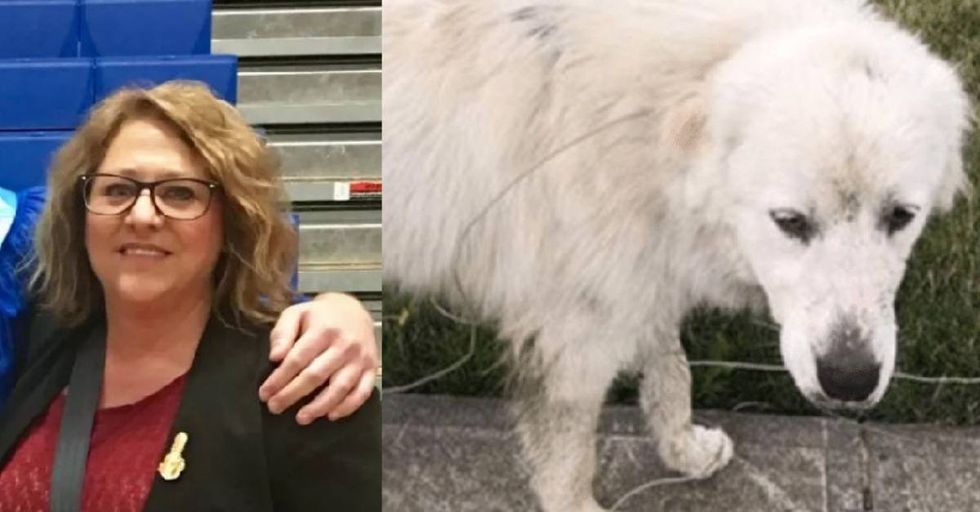 All dogs look the same, right? Yeah, not so much.

But according to this Ohio mom, they're all pretty much just whitish blobs with fur. When she was worried that the family dog had escaped and was found on the side of the road, she contacted her son to see if he had seen the pup.

What happened next will live on in Internet history as one of the most bizarrely hilarious mom texts of all time.

The family, who hail from Grafton, Ohio, own a dog named Duey, who's a bit of an escape artist. "Our dog tends to run away this time of year, especially around the 4th of July, with people blowing up fireworks all the time. He gets scared and runs around," Jeff explained to Buzzfeed.

So it makes sense why Terri would be concerned when she read about two loose dogs who had been found without collars wondering around town.

She immediately forwarded the image to her son to make sure that it was not their beloved pooch. There was only one problem...

It was definitely not Duey.

Also, please take a moment to appreciate the fact that Terri spelled the dog's name wrong, which did not go unnoticed by her son. Want to see what the REAL Duey looks like?

I mean, you can see the resemblance, right? Wrong. You cannot. There is none.

Jeff posted the exchange on Twitter, and the Internet collectively freaked out.

This may be the most mom thing that has ever happened.

Some users totally had Terri's back.

I mean, who WOULDN'T mistake a giant white dog for a Jack Russel Terrier? Happens to everyone.

Several users were quick to tell their own mom stories, all of which were comedic gems.

This one is slightly more embarrassing than Terri's blunder, since this mom actually saw the dog in person. Also, what kind of vet is just handing people random dogs?

This one may take the cake, though...

After Jeff's post went viral, one user actually did recognize the dog in the photo. "Within all those messages, one of Jeffrey’s friends said, 'Hey, those are my grandma's dogs!'" Terri told Buzzfeed. "Grandma has them back now." Never change, moms!