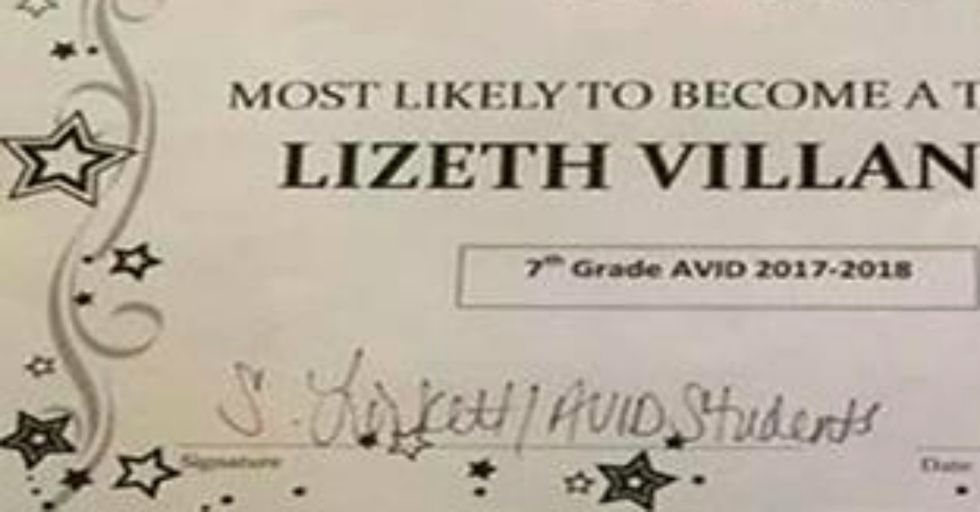 We're nearing the end of the school year, which means many teachers will be handing out end-of-the-year awards. But now a Texas middle school is apologizing and one teacher has been suspended after awarding a seventh-grade student the title of “most likely to be a terrorist.”

Yeah, that happened, and on the day following the Manchester bombing.

Thirteen-year-old Lizeth Villanueva, a student at Anthony Aguirre Junior High in Channelview, Texas, was given the "award" during a joint “fake mock" awards ceremony for her honors program class and another honors class.

According to Villanueva, her teacher warned the class before the ceremony by saying the awards “might hurt students’ feelings."

She told the Washington Post the teachers handed out other offensive honors, like “most likely to cry for every little thing," and “most likely to become homeless," laughing as they did it — adding insult to injury.

"It doesn't look like a joke to me," she added. "We're really upset about it coming from a teacher. That program is supposed to be for advanced kids. It is kind of hard to believe that she's doing that. Being a teacher and giving this to a thirteen-year-old. How is she going to feel when she grows up later on?"

The district sent out the following statement:

The teacher has been suspended, but the family thinks that's not enough.

And when shared on Facebook by Click2Houston, others seemed to agree.

But yet there were others who felt that it was just a joke and that people were being too sensitive...
What would you do if this happened to your child?