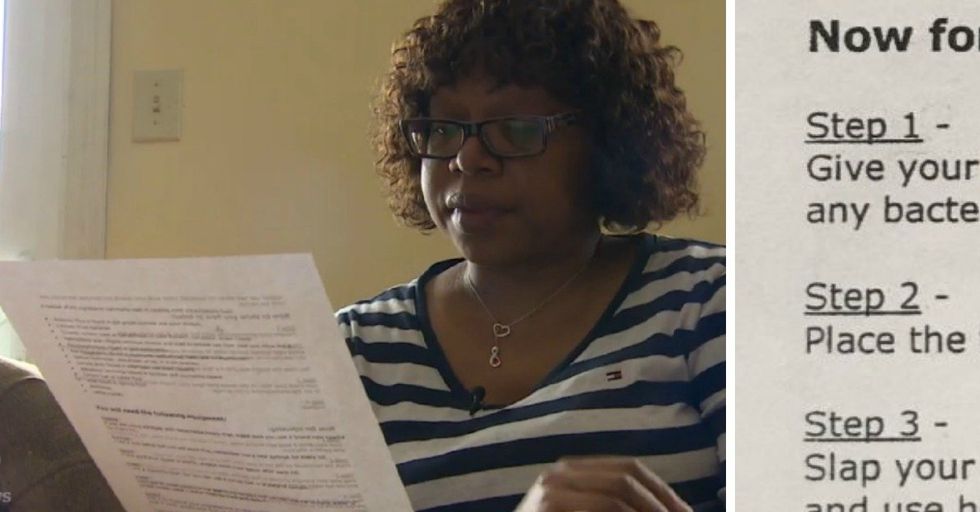 This Mom Is OUTRAGED By Her Son’s 'Cooking' Homework Assignment

Do you remember drama class in middle school? You probably did skits about things like summer camp or unrequited love expressed through song or injecting crystal meth, right?

A drama teacher at Erin Mills Middle School in Mississauga, Ontario, is under fire for his "unique" homework assignment.

But when that idea fell through, the teacher suggested a skit revolving around the use of crystal meth instead.

If it seems a little unorthodox to you to have middle schoolers perform a skit about crystal meth, you aren't alone.

It also came as a shock to Delight Greenidge, who was confused when her 13-year-old son came home from school and asked how to make a tourniquet for an assignment.

“I popped a blood vessel," she told CBC News. “I was in a state of shock … I’m thinking this cannot be real."

According to Greenidge’s son, the unnamed 8th grade teacher printed out the instructions as part of an acting assignment, and instructed the students to “act scared" when making the drug, and to “act happy" when injecting it.

That seems pretty crazy, right? But it didn't stop there.

The double-sided printout had instructions on where to source materials to make the drug and included a list of ingredients, as well as how to inject it.

Why did this teacher give his class step-by-step instructions on how to do meth?

I don't know about you guys, but I don't recall that as part of my middle school experience.

“I’m reading this thing and my eyes are just swelling as I’m reading it and I think my blood pressure went up by about 50 points because it is detailed, step-by-step, blueprint instructions on what you need to make crystal meth, how to prepare the crystal meth and then how to inject yourself with crystal meth," she said.

She went on to say it's "mind-boggling." Yeah, at least.

"It could undo a lot of what I taught him because sometimes he would think the things the teacher says are sometimes more important than the things mum says," she said.

"They do have that influence and impact."

And that's very true; teachers can have a huge impact on the kids they teach.

So what would become of this drama teacher and his "unique" method of teaching?

Carla Pereira, manager of communications for the Peel District School Board, confirmed the teacher handed out the instructions to some students.

She couldn’t speak to the rationale behind the teacher’s decision to use the materials, but said the incident was “shocking and inappropriate."

The teacher has been suspended without pay, and the school board is now conducting an investigation.

So, while we can celebrate the fact that the teacher was removed from his position, it makes you wonder why it happened in the first place.

What series of thoughts would go through a teacher's head to make him think that giving step-by-step instructions to middle schoolers on how to do meth?

Greenridge also wonders why it happened in the first place.

“To think that all of what I’ve tried so hard to teach him — good principles, good values, moral character — the things that make you a man, a strong black man, and this is what an educator is giving to my child," she said.

There's been no word on the outcome of the investigation.

But the school board said it's unlikely the details will be released publicly as it's a "personnel issue."