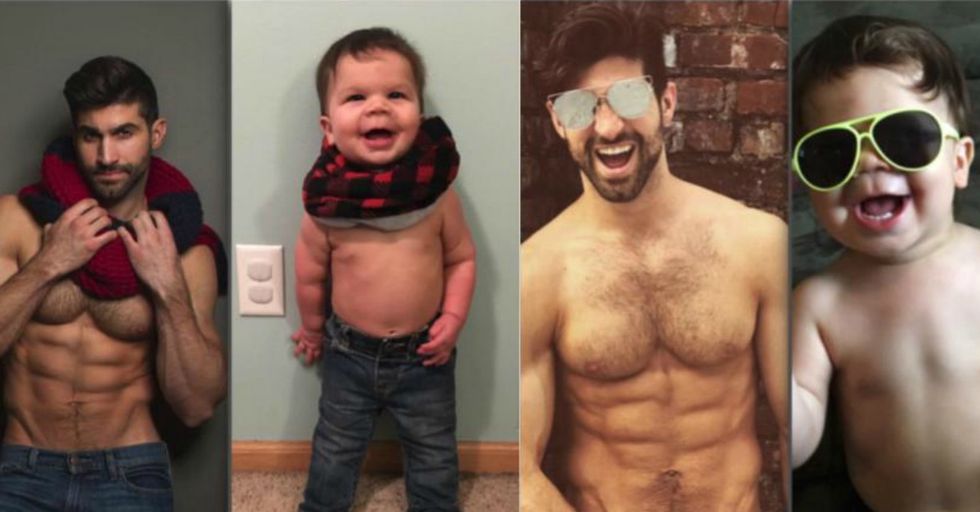 This Toddler and His Model Uncle Are The Cutest Doppelgängers

One day, Katina Behm was struggling to put a red flannel on her toddler. She stopped for a second and realized that he looked just like her younger brother in a photo he had taken recently. Her younger brother is Aristotle Polites, a model.

She had an idea. She took a picture of her son, Augie, and put it next to a snap of his uncle. The adorable Instagram account @babyandthebody was born.

Her first post was from the day she snapped the first flannel picture.

She captioned the post, "Imitation is the highest form of flattery. I present to you a new Man Crush Monday tradition. Happy Monday!"

She writes #whoworeitbetter on each post, but it's hard to decide.

It looks like modeling runs in the family. Augie is a natural. Each week, she takes a picture of Augie copying something that Aris is doing in one of this modeling shots.

Aris is in on the competition too.

He was surprised by her first picture and looks forward to them each week. He even shares some of her posts on his model Instagram account, where he says he is a model and lifestyle coach living in New York.

So steamy, so serious, so contemplative...

Augie's getting pretty good at looking off into the distance contemplatively. Who wins, washboard abs or baby tummy?  They're up to round 25 already!

Got a little something there...

Even though Katina usually models Augie's pictures off of photos Aris has already taken, sometimes they flip it around. Katina sent her brother a photo of Augie after he had smeared cake all over his face, and Aris quickly copied him and sent back a picture to match. What a good sport!