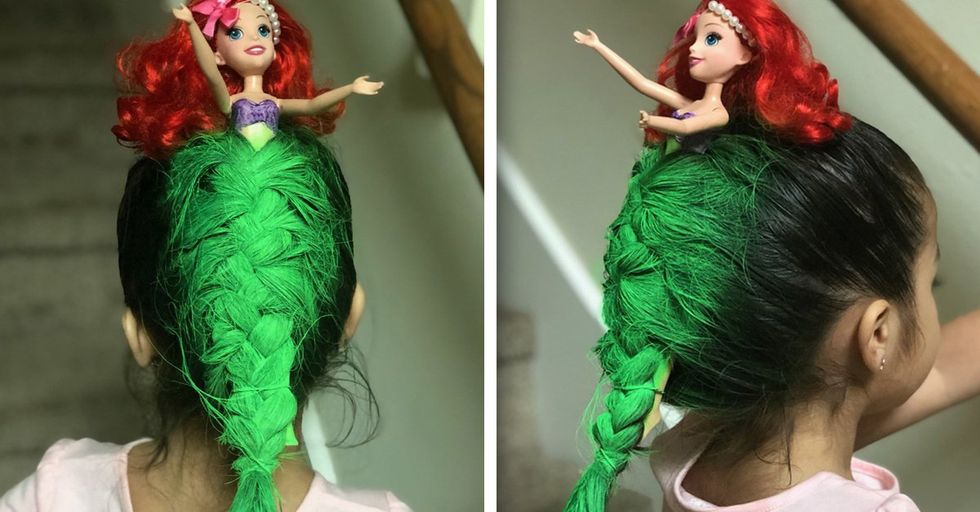 Remember getting ready for picture days in school? Or when you school threw a themed day and sporting the perfect look was a must? Almost every school does this each year, and the kids can get really into it. So, in fact, do the parents!

That's what happened when April Castillo's daughter Atlantis had 'Crazy Hair' Day at school. April decided to go above and beyond with her adorable daughter's new 'do. Atlantis loves The Little Mermaid, and April pulls off a mean french braid, so April got to work on her 'crazy' idea! You'll absolutely love this look when you see what April did for her daughter's big day at school.

Hairstyling is its own art.

We can all make a simple ponytail; heck, plenty can even do a basic braid, but it takes some skill to get really creative.

And Ariel Romero's mother proved herself to be a pretty great stylist.

Ariel lives in Texas with her mother, April Castillo, and her 4-year-old sister, Atlantis Castillo.

It was 'Crazy Hair Day' at Atlantis's school.

So mother April decided to go all out for her little girl! She decided to braid an actual doll into Atlantis's hair.

April had seen the hairstyle before but wanted to take it to the next level.

"My mom picked the hairstyle," Ariel explained while speaking to Buzzfeed. "She had seen people use a paper doll and wasn’t really feeling it, so she went the extra mile and added a real-life doll."

And the braid is styled to look like Ariel's fin! How cute is that?!

It wasn't that long of a task, either!

According to Ariel, the hairstyle took about 25 minutes to put together. And it's pretty neat that they used a whole doll (instead of paper) to make the look!

There's a reason for the mermaid inspiration.

"My parents have always had quite an obsession with 'Under the Sea', so my sisters and I have always loved mermaids," Ariel added.

It's the same reason the girls have their names.

We love it! 'Ariel' and 'Atlantis' are such cool names, too!

"She loved it so much and didn’t want to take it off. She even went to her gymnastics class with her hair like that," Ariel said.

The hairstyle was actually a family effort.

"What no one has noticed is that the bra Ariel is wearing is homemade," Ariel continued. "My dad made it out of tape. The doll was topless, but my mom couldn't let my sister go to school with a topless doll. Everyone was part of this hairstyle!"

Currently, the adorable tweet is sitting pretty at over 134k retweets and 741k likes!

They've even made it on TV!

And the family is still reeling a little bit from all the attention!

Ariel said that her little sister won the class contest "due to the fact she had the most attention and creative hairstyle."

However, Atlantis doesn't quite 'get' the viral response.

Big sister Ariel and the rest of the family attempted to tell Atlantis about her sudden internet fame. "We tried to explain to her, but she just asked 'Why?'" Ariel told Insider.

And Ariel is already pumped for whatever her mother thinks of next!

We can only imagine what amazing look Atlantis will be sporting by the time she gets to high school!

For not knowing how to do a fishtail braid, April sure made that actual mermaid's tail look great!

And Ariel will be posting a video about the braid soon!

Just in case any of you are looking to try this cool look at home!

The idea of schools hosting a 'Crazy Hair Day' nowadays has some people just tickled pink!

Someone came up with a name for April's hairstyle.

Who doesn't love a good hair pun? I'm totally here for it!

And other people began posting their own crazy hairdos on Twitter.

So get ready to see a TON of other cute and super inventive hairstyles!

Look at that refreshing cup of...hair.

This 'Crazy Hair Day' look went for a rainbow!

And it looks great, too! All it took was some rainbow pipe cleaners and cotton balls, by the looks of it.

There's a face on that face!

We love it when parents get creative with their kids' hair!

Also, this is the back of that little boy's head:

We have another winner, here!

Look at these fun cupcake buns! They've even got candles inside them--the 'icing on the cake,' as it were!

This unicorn comes complete with a little flower crown, and she looks amazing!

Another parent went for an 'Ariel' braid:

Well, you know what they say: great minds think alike!

And look! It's Frosty!

Even if it's not snowing outside, you can always build a snowman in your hair!

This little girl's hair is out of this world!

I can only imagine how hard that glitter was to get out. She looks fabulous, though!

So bravo to April!

And to the whole family for getting Atlantis all set with her crazy hair! They deserve all the kudos. Share this sweet story with your friends!