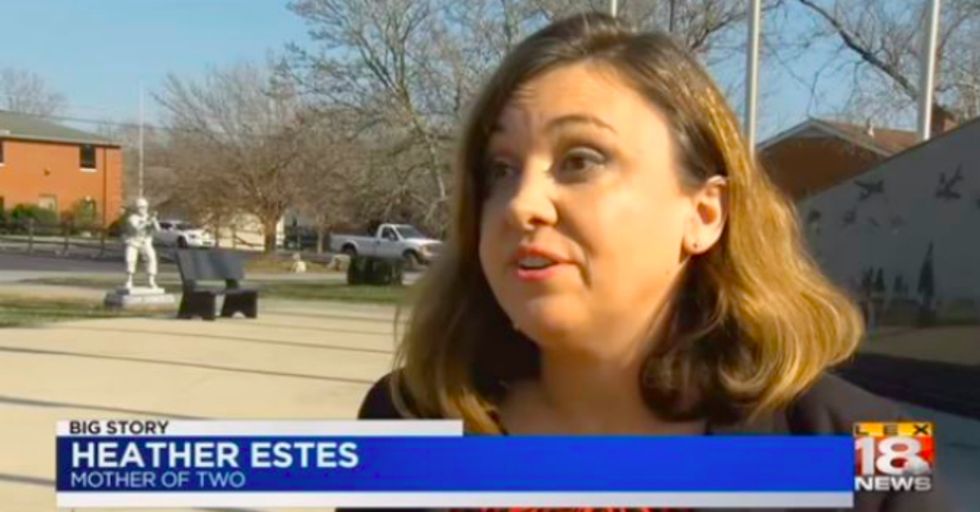 A Kentucky mother of two is at her wits' end trying to protect her two children from bullying at their elementary school.

The problem? It's not just the kids who are to blame.

School should be a place where children are nurtured and supported so they can grow into confident and capable adults.

When bullying happens at a young age, it can have catastrophic effects on a child's self esteem, which can often be irreversible. But what if a child is being bullied by not just other classmates, but teachers as well?

Heather Estes, a mother of two from Stanton, KY, is accusing her children's school of doing just that.

They reason they're being bullied? They're not Christians.

Estes posted her story in a private Atheist Facebook group.

In the post, she discussed the fact that most of the children who attend Stanton Elementary are Christian and attend a daily faith-based before-school service called The Upper Room. Because her ten and eight-year-old children identify as Athiest, they do not attend, and are therefore labeled as "outsiders".

The bullying from classmates includes verbal harassment and physical intimidation, such as their desks being shoved or overturned.

Estes claims to be at the end of her rope, as she has reached out to the school several times, but still no action has been taken. "I've tried to address it with the school for over a year now, and, while the principal at the school is very nice, it just continues to happen," said Estes.

The most upsetting part of the story? It's not just the kids doing the bullying.

"My children are asked every day, 'do you believe in God? Why don't you go?" Estes told local news station LEX 18. "He's been told by teachers things like the Atheists will be eaten by bears." And it just gets worse from here.

Estes also says that, after her son confided in a teacher about the bullying, she forced him to do something humiliating:

Stand at the front of the room and thoroughly explain his beliefs to his fellow classmates. “You’re going to have to stand up for yourself if you insist on being different," said the teacher to Estes's son. “Historians agree that the Bible is the most historically accurate book of all time."

Estes was horrified after her son told her what happened.

This type of blatant humiliation, taunting and exclusion has been going on for two years, and Estes is convinced that her constant complaints are falling on deaf ears. After multiple attempts for comments from local news stations, Powell County superintendent Michael Tate declined to go on camera, but claims that the allegations are being investigated.

Watch the video below to hear the whole story.

School should be a place of complete inclusion, and a child should never feel wrong or left out because of their beliefs. Bullying like this should never be acceptable, and these teachers are just exacerbating the problem.