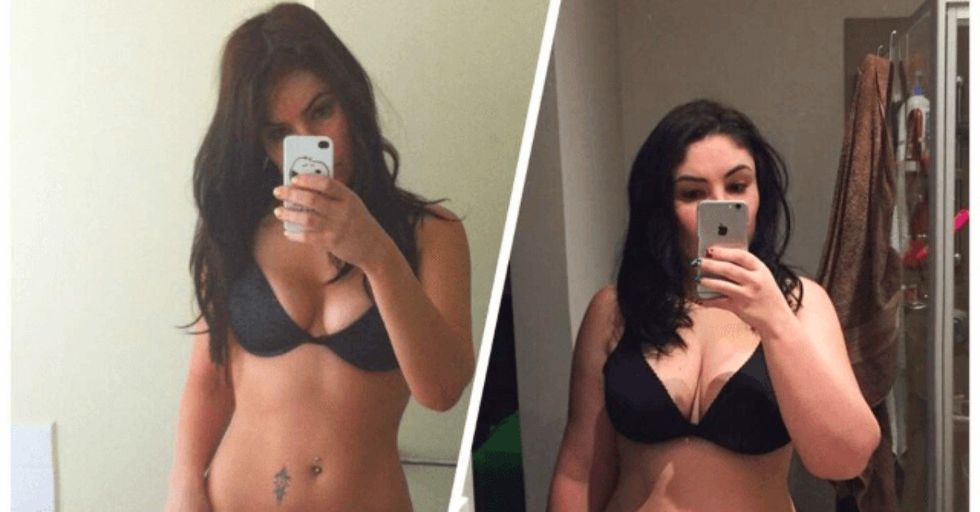 Having a baby is an absolute miracle, and while it's all totally worth it, there’s no doubt that doing so changes your body forever.

Laura Mazza, who blogs at The Mum on the Run, knows all too well what it’s like to look back fondly on your pre-baby body.

But she also knows that looks can be deceiving, and there there’s so much more to life and happiness than a number on a scale or an image in the mirror.

She's certainly not alone in looking experiencing a longing for her pre-baby body.

It's an issue common among moms, especially first-time moms. There's even a very popular hashtag on Instagram that allows women to share (or memorialize?) their bodies. It also serves as inspiration for moms to work to get their old bodies back after pregnancy can take its toll.

While the photos can be inspirational, they also feature women during a vulnerable time.

Not only are they susceptible to body-shaming, but they also run the risk of taking a hit to their self-esteem should they not achieve their stated goal.

However, Laura found a reason compelling her to go through with posting pictures of herself, vulnerability and all.

She did it to support others. One look at her Facebook page and you'll see she's got a history of this sort of selfless behavior. She's sharing her struggles, big and small, to let other moms know they're not alone.

Sometimes the posts are mundane, much like the life of a parent can be. Others touch on feelings, either specific or existential.

It's not all drama and glamour in her life, nor is it in ours. However, she was able to make some very big waves and even kick up some drama with a post that bared all in a very literal sense. Check out the shots and the reaction on the next page!

In a recent Facebook post, she shared a before and after photo showing her weight gain since becoming a parent, but it came with a very important message.

The pictures speak volumes, but she carried a message with them anyway.

It's a weighty message, but points like this need to be made precisely, and that can take time and effort, which Laura's shown she's will to spend to help others.

It gets touchy, and it's clear that this wouldn't be a comfortable subject for anyone to discuss.

But that doesn't mean it's not worth discussing.

So Laura did the difficult thing. She raised her hand and brought it up.

She ends with her hopes.

The hopes of getting her old body back. But it's not the end of the world, as you'll see in her closing words.

The message is pride, plain and simple.

Be proud of who you are. Even if you're hoping to transform.

It struck a chord with a lot of people, and there are more than 500 comments on the post.

From those who were soon to be first-time moms...

The anticipation and anxiety are real. Laura's message meant a lot.

To those who have been there already.

Veterans at this process and experiencing these feelings said "Amen!"

And it's easy to see that her message came through loud and clear.

"I have achieved more with this body, then I have with my old body. I've eaten more good foods. I've lived more, I've given more, I've enjoyed more. I've made life. This body, THIS body should be celebrated and admired." Cheers to that.