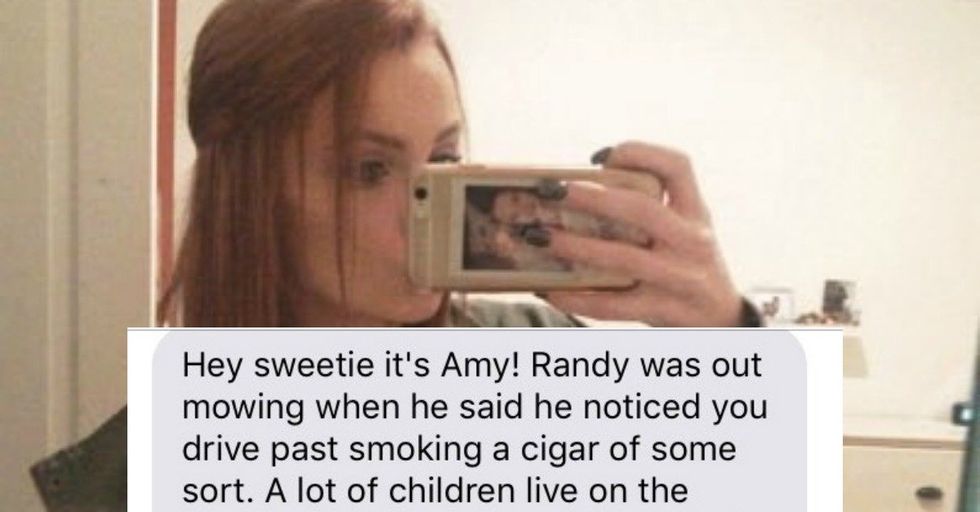 If you live in the suburbs, you know that sometimes neighbors can get a bit nosy.

Sarah is pretty much your average, upstanding teenager.

On Sunday, Sarah’s neighbor Amy, the mother of the kids Sarah babysits, was told by her husband that he’d seen Sarah driving with what he thought was a cigar hanging out of her mouth.

So naturally, she confronted Sarah about "smoking" in front of her kids.

She was concerned that the teen that watches her kids was hitting the stogies a bit hard.

But what her husband failed to realize was that Sarah’s wasn’t smoking a cigar.

In fact, Sarah wasn't smoking at all.

Wait until you see the source of Amy's confusion though. It's absolutely hilarious.

She was eating a taquito.

“I feel bad because in my opinion [my neighbor] is crazy nice and I get where she’s coming from," Sarah told BuzzFeed News. “She hasn’t responded, I’m assuming out of embarrassment."

But seriously, a taquito?

Amy's husband might want to get his eyes checked.

Sarah tweeted it out, and Twitter had some differing opinions.

Some thought the neighbor's text was totally passive aggressive.

We aren't totally sure if Sarah and Amy are from the South, but that passive-aggressive "hey sweetie" is totally a Southern thing to do.

Others thought they were just plain nosy.

But one Twitter user went full savage on Amy and Randy, and it was brutal.

Such a swift and vicious turnaround. It's probably a good thing Amy doesn't have a Twitter account.

Amy and Randy hadn't won themselves many fans with the nosy text.

But it's at least a pretty amusing story.

Most people just found it hilarious — and even had some suggestions.

Sarah and her taquito have inspired people.

We aren't sure why, and apparently neither are they, but we're still glad someone found some inspiration in this... somehow.

But think of the children!

To be fair, I have heard that taquitos are a gateway snack to hitting the hard stuff — tacos, pizza, etc. Better safe than sorry.