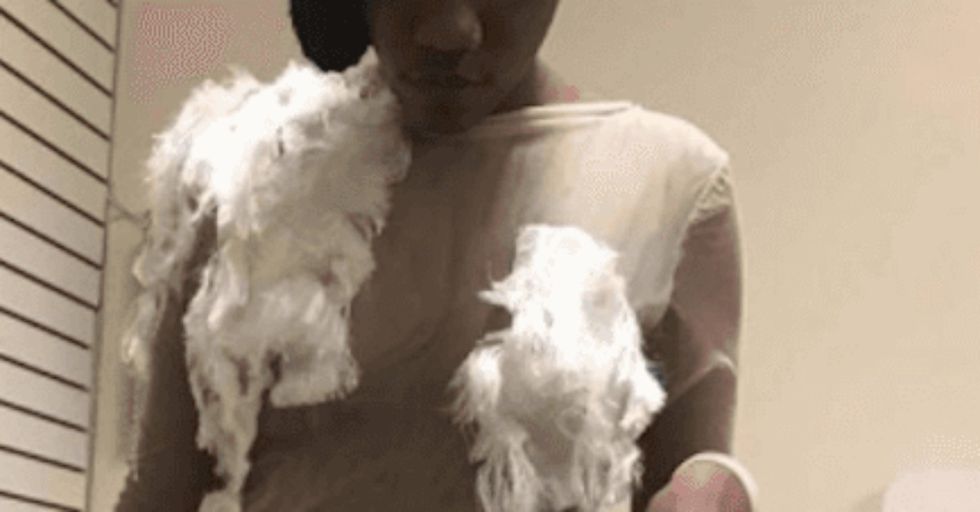 The thing about prom is that much like a wedding, a lot depends on the dress. And while you know that ordering online can be a crapshoot, you would think that trusting that custom gown to a professional designer would be a safe bet.

You would be wrong, as you're about to see what can only be described as the prom dress from hell.

High schooler Malexa Maeweather paid a local designer $300 to make...whatever this is supposed to be.

I honestly don't even know what's going on here. Did a swan explode? Did she run through a field of sticky cotton balls? The bottom looks like a tablecloth my grandma picked up at a yard sale.

"My daughter was devastated and crying when she saw this dress," mom Dee Lewis told Yahoo. "For a $100 deposit, Kia told my daughter that she would make her something nice with material she already owned and that she wanted to 'play around with the design.' Malexa didn’t know anything about what the dress would look like."

On the day of prom, Malexa tried on her dress and was unsatisfied, obviously, so her mother asked Wagner for a refund.

That was a big "nope," as “She didn’t offer any reimbursement as a professional courtesy." Lewis shared the pictures on Facebook where she got more than 5,000 comments, all along the lines of, "WTF?"

You know it's bad when The People's Court reaches out to you because you got so screwed over.

But have no fear! There was still hope for prom night...

Maeweather and her mother made last ditch adjustments to a friend's daughter's old prom dress, and the result was totally on point.

She looks stunning, so everything worked out in the end. And who knows? We might just see them on TV in the next couple of months. Case adjourned!