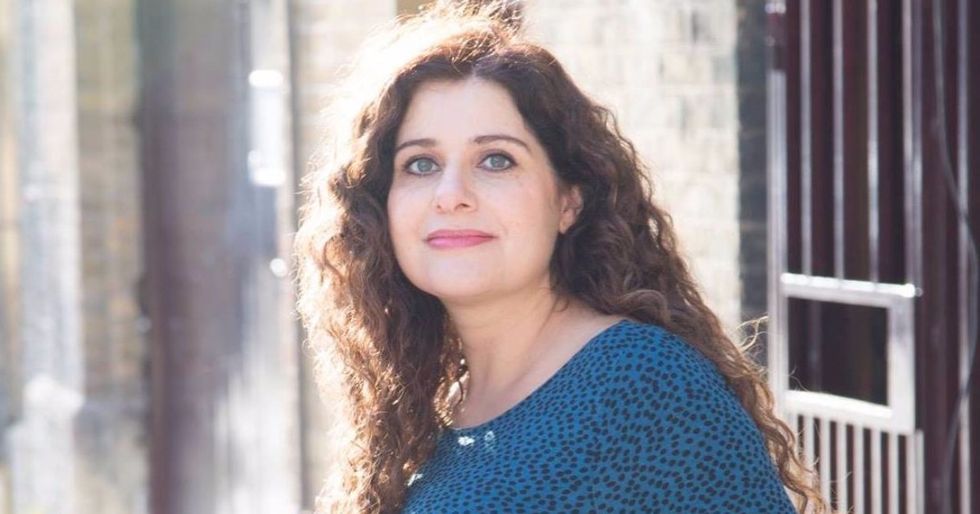 What parent hasn't looked back at a parenting choice we made early on and cringed a little? (Like that time I asked a babysitter, our first ever, to watch a CPR video and practice resuscitating a creepy baby dummy (which I had ordered online and freaking own like a weirdo) in front of me before I left her with my precious first born. Cringe).

But no matter what whacky choice you've made, at least you're not Hilary Freeman who not only decided not to send her toddler to a preschool because she felt the staff was fat, but she decided to write about it on Daily Mail.

If you're wondering if the internet at large kindly accepted her parenting decision... no. No it did not.

UK mom and journalist, Hilary Freeman, is not the internet's most popular person right now.

Freeman wrote an entire article explaining that the only reason she didn't choose a particular nursery school for her two year old was because she doesn't want her daughter to have fat teachers. She was then surprised by people's reactions. So she doubled down on her position.

She told The Daily Mail:

"The nursery assistant was clearly a lovely woman: kind and great with children. But as I watched her play with my two-year-old daughter, I felt a growing sense of unease.

She was only in her 20s, but she was already obese - morbidly so. She was slowly and breathlessly, her face flushed.

Looking around, I noticed that she wasn’t the only extremely overweight member of staff. I couldn’t help worrying about the message this was sending to the children in their care: that being very fat is normal and — when children adopt role models so readily — even desirable."

Ask any kid why they love their teacher, they will always say, "Because she's thin." They look up to people based only on what they see those people eat and if their thighs touch. Literally nothing else matters. Not.

Nothing mattered more to Freeman, anyway. She explains, "My anxiety about this was the main reason I chose not to send my daughter to that nursery, despite its Ofsted rating of ‘Good’. Instead, she goes to another, where the staff are all a healthy weight." All the staff at her current school are a healthy weight. Did she weigh them? Use fat calipers to make sure their weight is a healthy mix of body fat and muscle mass? What will she do if the school hires a teacher who does not live up to Freeman's expert opinion of what a healthy weight is?

Freeman told US Weekly that this insecurity comes from a lifetime of her own body image struggled. While she may be a size 6 now, Freeman was once a size 10 because of what she calls an "underachieving thyroid." She says, "I'm a slim person with a fat person inside, wanting to bust out." In the same article, she tells the magazine that she never consumes over 1,500 calories per day for fear of gaining weight. Well, that sounds healthy. Eye roll.

In the UK the average woman is a size 16 (equivalent to US size 14). Is it really a surprise that a population full of people who Freeman showed utter contempt for didn't take kindly to that contempt? Whether she expected one or not, backlash is exactly what she got...

People did not hold back.

The response to Freeman's post was swift and angry. And Freeman responded to much of it, defending her position and arguing with her detractors.

The more she defended herself, the worse it got.

Rather than apologizing or explaining that she had been misunderstood, Freeman engaged with commenters and Twitter basically exploded with infighting.

Can't you just hear the furious fingers pounding out responses?

We're grabbing our popcorn and tea and coming back to watch this epic Twitter war.

Oh I see. The problem here is that the commenter said "school" instead of "nursery" or "preschool."

When you feel like it's perfectly OK to actually call someone "ignorant fool" you belong on Twitter all day every day.

Some people kindly explained that not all slim people are good with kids.

While Freeman concedes that the staff appeared to be great with kids despite their terrible flaw of fatness, she clearly believes that body shape trumps that. Basing who is a good role model for our children on body type doesn't seem like a great idea. You know, never judge a book by it's cover. I guess that only applies unless that cover is fat. Freeman explains, "Rolls of fat are not attractive — I shouldn’t be scared to say that." Oh, Hilary Freeman. No.

That said, without internet villains, Twitter would be boring.

I think the school, sorry, the nursery dodged a (skinny) bullet here. They are not crying over the missed opportunity to deal with this mom every day for the next few years.

Is accepting all body types really "going too far?"

Freeman states, "Fat-positivity — also known as fat acceptance — has gone too far." Is accepting other people for the way they are something that can go "too far?" Isn't the alternative rejecting them? We should reject people based on the size and shape of their bodies? There is undoubtedly a weight problem in both England and the US. But acknowledging that there's a problem, and addressing the way we collectively eat and exercise does not have to include shaming, rejecting, and discarding people.