So it sounds like the neighbors are the ones who put in a complaint... | 22 Words 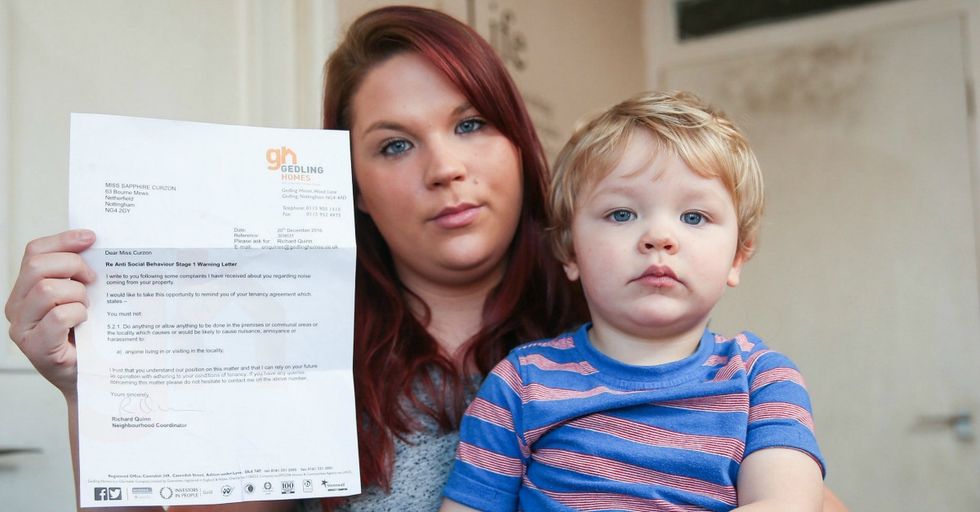 British Single Mom Might Be Evicted for Nothing More Than Having a Happy, Normal Toddler

Most parents know that their kids can get excitable and a bit loud at times, but that most of the time, it's simply kids being kids.

But for Sapphire Curzon in the U.K., mother of two-year-old Callum, she recently discovered that her son making loud noises in their home can have drastic consequences.

Wait until you get a load of this...

She received a threatening letter from the housing department where she lives notifying her that Callum plays with his toys too loud in their one-bedroom apartment.

The letter threatened to serve her with an ASBO or anti-social behavior order.

For reference, an ASBO is a serious offense, and is commonly given to people in the U.K. as a result of rioting, drunk driving, or dealing drugs.

"Two-year-old" doesn't exactly fit any of those criteria, but yet she still received the letter.

"All my son does is run around and play with cars, trucks and building blocks," Curzon said.

"I find myself now constantly telling him off. But I shouldn’t tell him off because he’s playing. It’s just what a child does. He gets excited."

Does that sound like a load of crap to you?

Well, compose yourself, because it's about to get even more infuriating.

"Whatever noise my son makes I feel like I have to scold him straight away," she added.

"I’ve essentially having to stop him from having any fun."

"I’m not going to punish him for being a happy child," she said.

"I knew the neighbors were annoyed, but I wasn’t ever expecting to get the letter."

So it sounds like the neighbors are the ones who put in a complaint...

I suppose we can't know for sure how loud that kid was, but there's no way he was that loud.

While the family is upset, no legal action has yet been taken.

The letter said further action could be taken if she does not stop the noise coming from the flat.

It states she must not "do anything or allow anything to be done in the premises or communal areas or the locality which causes or would be likely to cause nuisance, annoyance or harassment to anyone living in or visiting in the locality."

If that sounds completely arbitrary to you, that's because it is.

ASBOs can last for a minimum of two years, but they can be applied for life.

That likely won't be the case here, but it is still a scary thought to have looming over your head.

Sapphire is upset about the way the ASBO is causing her to treat her son.

No one wants to tell their child to be quiet all the time, especially if they're legitimately happy or excited about something.

But at least the fact that she's aware of all of this means she's probably a good mom.

"It's really making me frightened because I’m scared of going to court," she said.

"I’m not a criminal. I’m just a single mum with a toddler son."

It's hard to know just how noisy her son was being, and it makes sense that complaints should be addressed.

But do you think this is taking things too far or does it sound fair?