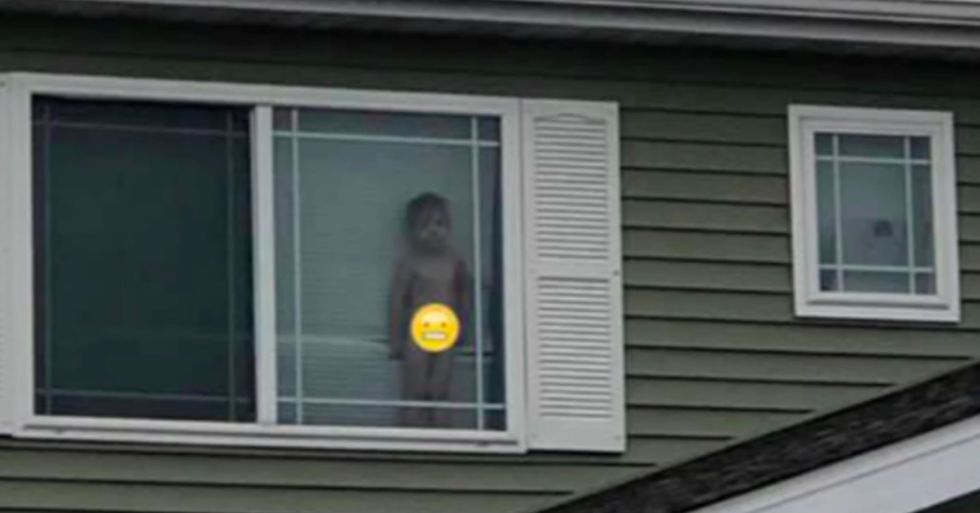 Listen, kids are some of the stupidest creatures on earth. But it's not like it's their fault — if you'd spent 9 months gestating in a womb, only to be expelled into some sort of sterile, empty room where a man in a white lab coat and face mask slaps you on the butt, you'd be disoriented too. Like, that is a weird situation to find yourself in, isn't it?

Being alive is an entirely new situation for kids, and you'd probably do some stupid things as you tried to adjust too.

And yet, that doesn't mean the stupid things kids do aren't hilarious.

The Subreddit /r/KidsAreStupid finds the most ridiculous moments of kids acting, well, stupid and puts them on display for the entire internet to see.

And one mom's post has got the whole internet laughing. Kids, eh? Who'd have 'em?

When my son Seth was little, he would beg his brother to put him in this particular pillow case and swing him around. I know it's insane and the only reason I'm telling you now is because they are grown up and I can't lose custody of them. - jchases99

Maybe this could have been explained a little more clearly.

Burn it alllllll down.

A child ripped up their allowance because he wasn't happy with the amount. His mom walked out of her room and saw this. - @adamcarriker94

No one tell him.

Keep your toddler busy by letting them paint the fence with water. - talynmitchell23

And to think, he could've been Spider-Man. Or Iron Man. Or any man, really.

I just want everyone to know that my two-year-old insisted on being "pants" for Halloween. - chickcag

I had to work overnight last night and while taking a nap today I was vandalized. I have a picture and have detained two suspects, but one is not cooperating. The only one who can speak blames it on the four-legged suspect who has no hands to pull off such a stunt. - Buff_52

"Of course it's happening in your head, Harry, but why on earth should that mean it isn't real?"

My four-year-old nephew asked me to draw him Harry Potter, and then excitedly shouted "I'LL DO THE LEGS!" - @sophiaallenx

My sister just had a baby. She brought her home today and my other niece was so pissed she packed up all her sh*t and tried to leave. - chinchuberry

My kid swallowed a penny while showing his little brother how he accidentally swallowed a simm key the day before. - StumpedatUserName

The con is on.

My son has been very picky lately, but he loves Taco Bell. So I made a homemade meal and put it in an old Taco Bell bag. And IT ACTUALLY WORKED. - [account deleted]

Doesn't he realize how cool that is?!

This is the look I genuinely though Joe Jonas was going to see me wear and fall in love with me in 2008. - @Emily_Runnels

We put my son to bed and we're in the living room watching a movie when we hear a noise in his room. We called up to him and he said it was his drawer that made the noise. 10 to 15 minutes later, I go to pee and look in his room and see his little chair up to his dresser and the lid from his fish tank on the ground. This is what we find... UPDATE: now he's upset because he killed his fish and said he just wanted to pet it. - ShaRoyal

An even bigger whodunit...

Someone ate all the muffins (it was him). - IrfanMirza

"I guess I will build a life here."

My son after trying to get back down from washing his hands. Just hanging there... helpless... - fiteMILK

One time my uncle put a wig on my cousin's head and told him it was permanent. - nyzoran

I lie motionless on the ground when they don't match.

I walk out of Target to the scene of a child lying motionless on the ground. I asked what was wrong and the dad said, "He's upset his gloves match his jacket." - @SparkyROAR

It was make an album. That was it. That's all she did.

You can tell those older kids are good at Pokemon because they captured an animal smaller and weaker than themselves.

My two older children were trying to lay out all of their Pokemon cards, but the youngest kept intervening, so they duct taped him to a chair. - EthanLond11

He could be anywhere...

My four-year-old son thinks he's a ninja so my wife took a picture (before he was in the frame) and showed him. He absolutely thinks he's invisible in front of our black appliances. - OneNightBland

Kid snuffs out his birthday candle with his face. - TheNeutralParty

This kid asked me for some Skittles but I had just finished them so he stared at me like this the entire flight. @HussSrour

My friend's kid learned that his teacher can see everything he does in Google Docs today. - wildshapes

Toddler was asked to feed the cat. - KittyKanuckles

Hey... even an adult could make that mistake...

My little sister wondered why her screen didn't work... - Annoying_chicken_69

What more do you need?

First grade me apparently believed the world consisted of only New York and Florida. - vrmtts

At first I thought he'd dug a tunnel through the carpeted floor.

Notoriously, red is a color that inspires hunger.

Some kid took a bite out of the cardboard at McDonald's. - SausageSnagDog

But this fail might be the most hilarious yet.

One mom shared an incredible story of her kid doing something super embarrassing this week.

One hilarious thing about kids?

They basically have absolutely no qualms with being naked - whenever.

But for the rest of us?

Well, we've all been socialized to believe that being naked is actually a little bit weird.

Which can lead to some rather embarrassing situations.

Which Jeni Boysen, a mom from Cedar Rapids, Iowa, knows only too well.

She received this text message.

The picture is totally hilarious.

Lucky it was such an understanding neighbor who spotted the rogue child!

We're glad this wasn't us.

This mom took it remarkably well.

"I just cried I laughed so hard. This is exactly the laughter I needed tonight."

"Ya know. Sometimes you think you’re doing okay at life and then you get a message like this from a neighbor."

Moms of the internet can relate!

Fancy more great mom content? Scroll on for the best of the internet's hacks.