Unfortunately, one of those very tweets landed her in hot water. | 22 Words 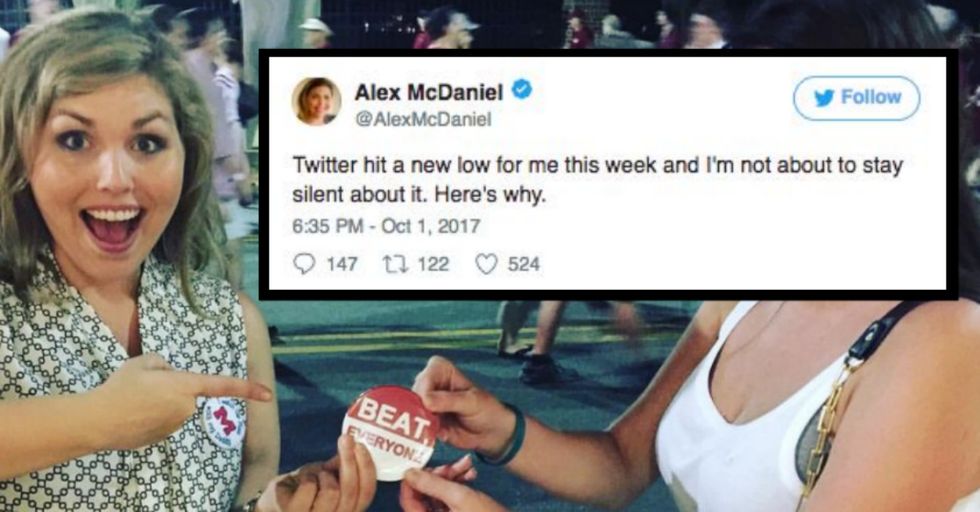 This Mom's Online Joke Snowballed Into a Scary Misunderstanding

When you're a parent, you sometimes get so frustrated you want to sell your children. Well, not literally sell them, but maybe cart them off to a loving grandparent or relative for the weekend, so you can get some much needed rest and relaxation. It's not that you don't love them – you do, you even love their grubby, grubby tendencies – but sometimes, you just need some me time. And if you can't get at least that, you can blow off some steam by making a harmless joke, right?

Unfortunately, that was not the case for this mom.

Journalist Alex McDaniel of Mississippi was used to making jokes about her three-year-old son on Twitter. In fact, she'd even garnered something of a following of people interested in her witty rhetoric about their cute mother-son dynamic.

There is no question McDaniel loves her son. In a post she wrote on Magnolia State Live, the online news source of which she is the Director of Content and Audience Development, she said this of him: "He says the sassiest, smartest, most ridiculous things when I least expect it, and it’s one of my favorite things about him (and parenting, in general)."

Unfortunately, one of those very tweets landed her in hot water.

After having a funny conversation with her son over his potty use, she posted this now-deleted tweet: 3-year-old for sale. $12 or best offer.

A couple of days later, caseworkers from the Lafayette County Child Protection Services dropped by her door with a sheriff's deputy in tow.

An anonymous male had tipped them off to her tweet, and she was being investigated for child trafficking, they told her. Could she take her son out of school? McDaniel had no choice to retrieve her son from preschool during nap time so that the officers could talk to him.

Thankfully, McDaniel was able to retain the services of a great lawyer, who got the case dropped in a few days.

She has no hard feelings about CPS either. "CPS has a hard job," she said. "both in the nature of what they do and the day-to-day demands of handling each case... I don’t blame them for doing what they felt they had to do in this case."

She is, however, upset about the anonymous tipster who called CPS, because she thinks he deliberately misrepresented her tweet to the agency.

She says, "While no one knows who made the call (though CPS protects the anonymity of informants, this person refused to leave any contact info and isn’t required to do so), it’s hard to look at this as an innocent misunderstanding or someone who doesn’t understand humor. I have no proof it was a targeted attack, but enemies come with the territory in this business [journalism]. It seems unimaginable that someone would despise my opinions on flags and statues so much that the only answer is to harm my family, but in some ways, it doesn’t seem that far-fetched." But that's not all...

As she wrapped up, she had a few last thoughts.

"It is one thing to come after me, a grown adult woman who enthusiastically signed up for a career that comes with a large amount of exposure and criticism. Coming after my son is utterly despicable. What upsets me more is the idea of anyone using an agency designed to protect Mississippi’s most vulnerable children as a weapon to take someone down for no legitimate reason. Time and resources that should have been spent on children and families who genuinely need it were instead dedicated to a tweet, and all because someone out there probably got bent out of shape that I don’t see the world the way he does."