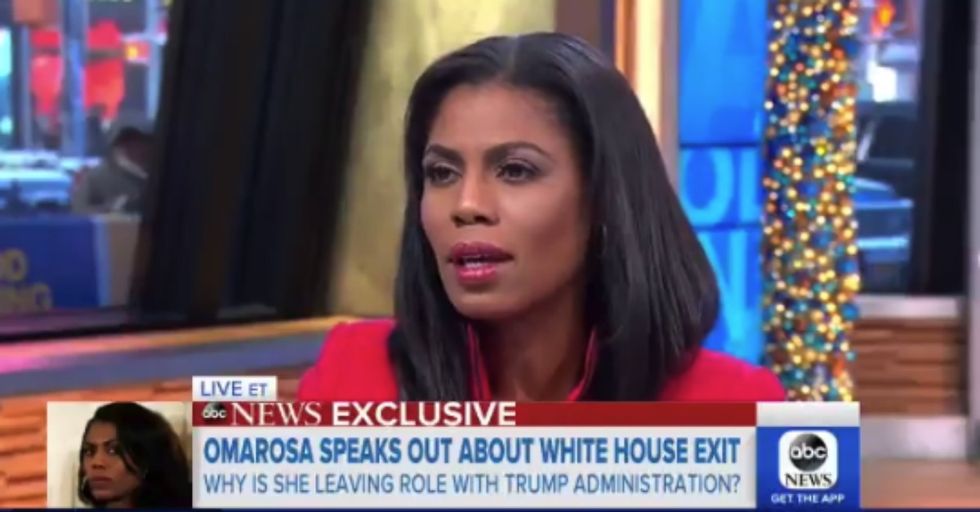 Omarosa Manigault-Newman made her way from The Apprentice to the White House, much like Donald Trump himself. But now, she's out. White House Correspondent April D. Ryan broke the news of Omarosa's departure from the Trump administration on Wednesday. It's still unclear whether she resigned or was fired — but one thing's for sure: Whatever happened, the story is juicy. Omarosa has been a controversial figure since she appeared on The Apprentice all those years ago, and the report of her leaving the White House elicited some strong (and hilarious) responses from news reporters and regular ol' Twitter users alike.

According to April D. Ryan's report, Omarosa was fired and did not go down without a fight.

According to Ryan's sources, Omarosa "did not take the information about her firing or resignation very well. She walked over to the residence and tried to get in. General Kelly was called back to deal with this issue as Omarosa was trying to get into the residence to see the president. Secret Service stopped her, and she was escorted off campus." Apparently, she was "very vulgar" and used curse words when the news was dropped on her. Ryan reported that Omarosa's negotiated resignation cited January 20 as her last day but that it's unclear if she will stay on until then.

Of course, this isn't the first time Omarosa's been fired by Trump.

She rose to fame (infamy?) on the first season of The Apprentice, but was fired by Trump before the season ended, and more than a decade later, she's been fired by Trump (or his staff) before his season in the White House ends — though we hope it's not too long before he's out, too.

Omarosa fiercely denied that she made a scene and maintained that she did resign and was not fired. The Secret Service also stepped in to set the record straight:

They didn't physically remove Omarosa from the premises. All they did was restrict her access to the sensitive areas to which she is no longer allowed. But that doesn't seem to be the whole story...

Donald Trump, who always has a lot to say, bid farewell to Omarosa with this message:

It's suspiciously short and goodhearted for the President of the United States. Perhaps he's trying to stay on her good side? Once she no longer works at the White House, there are probably stories she will publicize about her time in the White House, and we can't imagine those stories will be all rainbows and butterflies.

She repeats ad nauseam that she was not fired — she resigned. OK. We get it. She also offered this ominous response when she was asked what she thought of Trump's handling of Charlottesville and his endorsement of Roy Moore: "Because I am serving until the 20th, I have to be careful about how I answer this, but there were a lot of things I observed over the past year that I was uncomfortable with. When I have the chance to tell my story, quite a story to tell. As the only African American woman in this White House... I have seen things that have made me uncomfortable, that have upset me, that have affected me deeply and emotionally, that has affected my community and my people." Obviously, there were quite a few reactions to Omarosa leaving the White House and all the hullabaloo surrounding her departure...

My sources were right @Omarosa45 tried to get into or break into the residence. She tripped the alarms of the resid… https://t.co/4UufZNiKEx
— AprilDRyan (@AprilDRyan)1513223710.0

She believes her sources, and when she says she has "sources," that implies that there's more than one. In the words of April Ryan, "Lawd help!! She was fired."

On CNN, political analyst Angela Rye couldn't quite contain her excitement over the dramatic story of Omarosa's departure:

That laugh is real, guttural, and hilarious. Even though Ryan remains diplomatic as Rye exclaims, "Bye, girl, bye!" you can see that she's secretly also laughing inside.

And who could blame her? That moment is seriously one for the books.

Omarosa's been a controversial figure — a lot of people see her as the "villain" she was painted as during The Apprentice, and if we're being honest, it is a little bizarre that she would fight for a position in what is shaping up to be the worst presidential administration in U.S. history.

Possibly the most amazing moment ever came immediately after Omarosa's GMA interview, when it was thrown back to Robin Roberts in the studio and this is how she chose to end the segment:

Yes, Robin Roberts "Bye Felicia'd" Omarosa. "She said she has a story to tell and I'm sure that she'll be selling that story," Roberts said snarkily. "Bye, Felicia."

It was a beautiful moment, and this was pretty much the reaction of the entire Internet:

Look, Omarosa might try to capitalize on her time in the White House, but honestly, if she's got good dirt on Trump, we don't care how much money it costs. We'll pay. Let's just say we're looking forward to January 21.