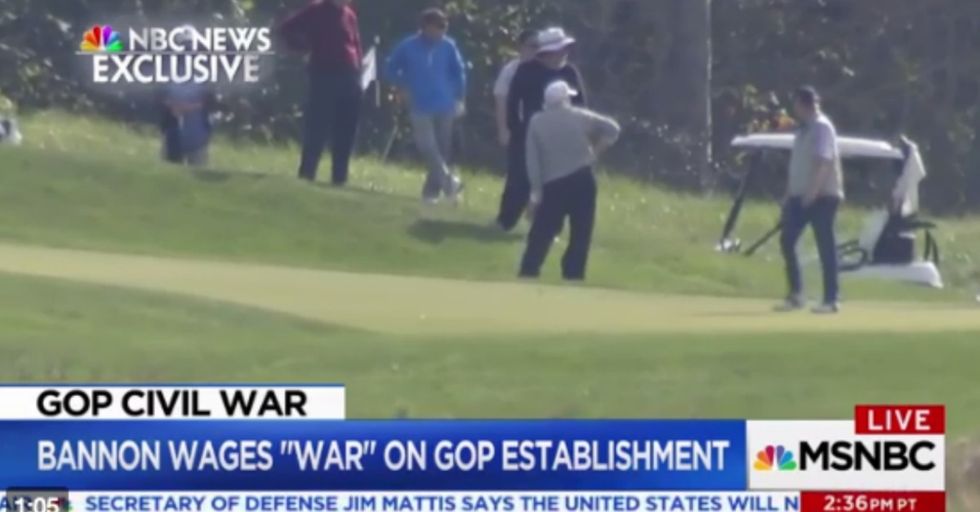 When Donald Trump ran for president, he said that he wouldn't spend his time golfing "like other presidents," and would instead spend his precious time as the leader of the free world in the oval office. He didn't follow through on that simple promise.

He's now visited his vacation properties and golf courses more than his last three predecessors. NBC even has a page that will tell you how many days of Trump's presidency he's spent golfing.

But what's worse than skipping out on presidential duties to go golfing?

A president who goes golfing and then cheats on the course.

They used some B-roll footage of Trump playing golf, and it appears to show Trump doing something odd... It looks like he's cheating at golf. If you watch closely, you can see Trump putt the ball, watch it roll a couple of feet, and then walk over and stop the ball with his club. We may not be golf experts, but we know that's not allowed.

This isn't the first time he's been accused of cheating at the game either.

A Washington Post piece from 2015 sites Trump saying, "The guys I play with cheat all the time... I have to cheat just to keep up with them." And when people he's played with bring the cheating up, Trump just denies that he's played with them at all. If the fate of our country wasn't at stake, this would be comical. What the heck?! The person with arguably the most power in the country is cheating at a game of golf? This is something that should happen during a movie like Happy Gilmore, not a weekend with our highest elected official in office.

This is Trump's fourth consecutive weekend at the golf course.

You'd think that someone who spends that much time ignoring questions about the hurricane in Puerto Rico, his own sexual assault allegations, and Russian conspiracy allegations by hitting the green would have some more refined skills. By the way, in case you were curious, each of these trips cost U.S. taxpayers $3 million.

Trump has been in office for 283 days so far. He spent 96 of those days at Trump vacation properties and 76 of those days on golf courses, according to the NBC tracker logging his days on vacation.

But not everyone is mad at Trump for taking some days on the green.

They're just upset for different reasons. Ana Navarro of Telemundo, who snapped back at Donald Trump for saying he likes to grab women by the pu**y, was an unexpected supporter of Trump's golf excursions. Back in March she wrote, "Thank God. America is far safer when President Loco is out of the Oval Office trying to sink little white balls into holes. Let him play."