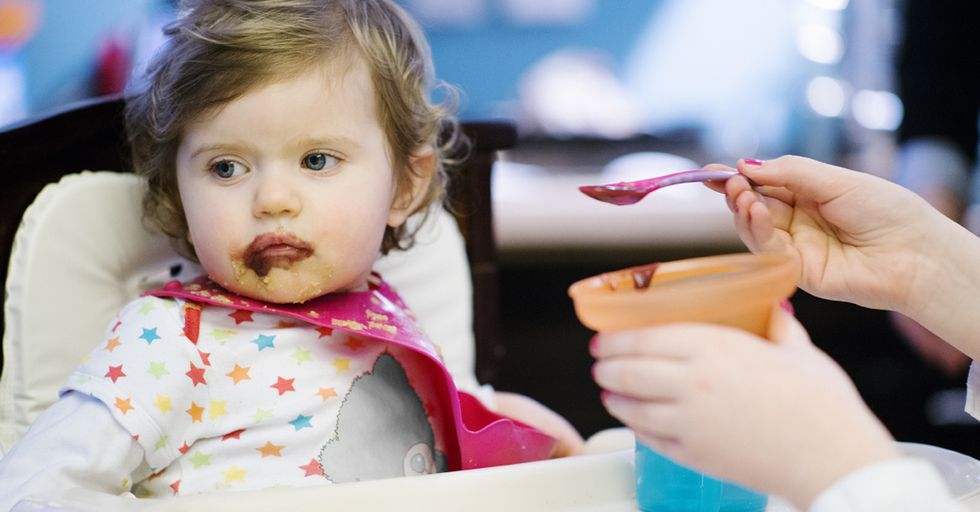 Before I became a parent, I was one of those people that had the audacity to say things like “my kid would never do that.” Even after my first kid was born, I thought that my kid will be the best-dressed, best behaved, and only eat farm fresh, organic homemade food. You can go ahead and laugh at me because I sure do.

We've all been there and look back and think how adorable and naive we were, with our best intentions on being perfect parents with perfect children before they were even born.

That's why when the popular Facebook page, Sanctimommy, shared a post by a new mom claiming that she’s a “pretentious foodie” and that her kid will not eat off of a kids menu, seasoned parents rolled out the jokes and gave her a quick lesson on what she’ll really be dealing with.

The comments are hysterical and all very accurate as to what will happen once her kid realizes they can have options to eat, and the pretentious foodie mom will learn that for her kid there may only be limited choices. And if they're anything like my kids, it will be macaroni n' cheese with a side of macaroni n' cheese.

It's cute how this new mom thinks she'll be in total control come meal time.

The good thing is we were all there once, and a whole lot of moms were more than happy to let her know how it will really go down when she tries to feed her kid a vegetable medley instead of alphabet mac n' cheese.

I'd love to see her try to give her kid anything else.

There aren't any parenting books that prepare you for how much mac n' cheese you'll have to buy and serve to your kids. At my house, we have a Costco membership just so we can buy it in bulk.

See, it's a legit club that only kids and the parents that are boiling and pouring cheese all over those noodles know about.

Karens from all over the world are not happy about being in the noodle club.

Someone has to also let her know that kids will also eat what they're not supposed to.

Kids are like, "ew, rice is gross!" and then they're like "can I eat this Cheeto I just found next to the garbage?"

Food on a plate is gross, but food on the floor is delicious, according to toddlers.

Well, maybe if she serves the kale on the floor her kid will eat it?

Pfft! And at some restaurants kids can eat free off of the kids menu.

Basically, pick your battles, save money, and just get the nuggets. Trust us.

Feeding kids is tricky. You'll literally have to trick or bribe them into eating.

It's probably one of the most challenging stages of parenting young children, meal time. Kids get very picky and if you have more than one, you'll have to adjust meals for each kid. For example, if I don't cut my 5-year-old's peanut butter and jelly sandwich in half, she won't eat it. My 2-year-old won't eat her PB&J if I don't cut it into squares and remove the crust. Don't ever forget to remove the crust.

Because it will happen, Karen. Don't think for a second that your kid will not want to eat dinosaur shaped chicken nuggets.

It's like I said, they'll actually want to eat what they're not supposed to.

Dog food, M&Ms they found on the floor, gum stuck to the wall, and boogers, are just a few things kids have an appetite for.

Careful what you wish for, Karen.

Offer them tomatoes and they'll think you're poisoning them, but offer them ketchup and they'll want you to pour it in a sippy cup to drink it.

We all know this will happen.

Kids are complicated beings when it comes to their food choices.

By the time you're parenting your last kid, you'll give up the battle.

Meh, it probably won't do any harm anyway.

This is bound to happen.

Once your kid becomes mobile and you have pets at home, I guarantee you that they will 100% eat dog and/or cat food.

It doesn't matter if you feed your kid breastmilk, formula, organic, not organic, etc. They will all turn out to love chicken nuggets and they will be just fine.

Don't beat yourself up over your child's diet, Karen. What you'll really need to worry about is them eating anything.

The funny parents of Twitter have been tweeting about meal time troubles with their kids all along. Except the Karen's of the world have not been paying attention. Let's check out what these parents have to say about feeding their kids.

It's a universal frustration for parents everywhere.

They change their minds frequently.

Probably why buying any food in bulk is probably not a good idea.

And don't even try to change the recipe.

It's like nothing exists if kids can't have their chicken nuggets.

They don't even understand how delicious some foods are.

He'll have to cut them up to look like nuggets.

Getting kids to eat can be so frustrating, some parents would rather let someone else do it.

Come on, technology. Let's make this happen for real.

Ketchup is a delicacy for kids.

When I was a kid, I remember that I didn't understand why my parents were frustrated with my little brother having to eat everything with ketchup. Now that I'm a mom, I totally get it now.

And sometimes we do understand that dessert should come first.

The best part about being an adult is that we can eat whatever we want when we want to. But we can't let kids know our secret.

Chicken nuggets is their culture.

There's now way to explain how much kids love nuggets other than tweeting about it.

This sounds like a typical morning in my house.

The Karen's of the world have inspired this next tweet.

Just the thought of cauliflower pizza crust makes me sad. What is going on with society?

When they do eat we're like "Thank god!" but then we notice how they're eating and we're like "Oh, god!"

As long as they eat something, just let them eat however they want. I guess they'll learn, eventually.

I mean, do we really have to make dinner every night just so we can get frustrated and most of it will end up on the floor any way?

This reminds me that I haven't bought Nutella in quite some time, so now it's on the grocery list.

This kid is going places.

Whatever is going to get them to eat is probably a good thing.

If anyone needs their dinner cut up, I'm your girl.

Pretty much the only thing that will make everyone happy is pizza and Pop Tarts for every meal.

It's easy and the best part is, I don't have to cook or clean.