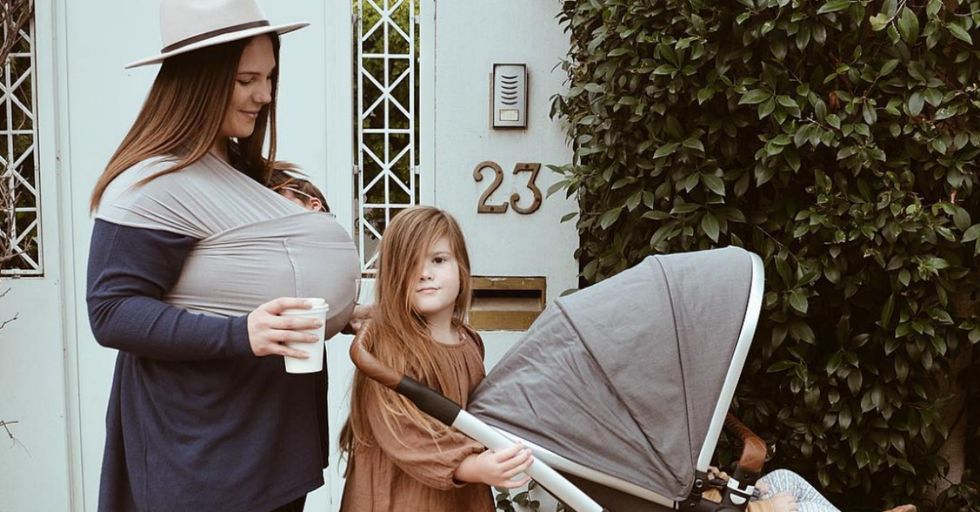 Once a baby arrives, it's easy to forget all about the human woman's body it's just left. But new mothers' bodies are dealing with massive changes during this period. And while movies and tv shows often skip right from the delivery room to an actress-thin new mom on the playground, some women have decided to start talking about this.

One new mom from Australia recently went viral on Instagram, sharing a very real photo of her postpartum body.

We're all used to seeing pregnant women in a certain light.

Usually those bumps are covered up under increasingly fashionable maternity clothes. Pregnant women are often described as "glowing", or being ethereal, out-of-this-world beings who are above all our petty non-Earth mother needs as their bodies work to create actual human life.

Elise Grossman is no stranger to pregnancy.

She's brought three kids into this world, and has gained a following on Instagram. The photos of her family in Western Australia are heartwarming and beautifully done. But she doesn't shy away from the messier side of parenting.

She only recently gave birth to her third child.

She and her husband named the little girl Willa, and she's quite the little bundle of joy. Of course, the work of getting her here wasn't quite as glamorous as Elise's pregnancy photo shoot might have suggested.

Elise shared multiple photos walking her followers through the story of Willa's birth. She didn't let up on any of the gory details, sharing with all the world exactly how that baby sausage gets made. But it was what she shared after Willa was already born that took people by surprise.

She shared this photo of herself right after giving birth.

In an effort to show women that they myth of your bump "disappearing" after your baby is born is just that: a myth. Though movies and tv shows about the process usually skip this part, many women thought Elise's photo touched on a reality lots of people need to face about how human bodies work.

It wasn't the only photo she shared.

Though it was probably the grittiest, other photos were soon to follow. Elise is working to embrace her own postpartum body, and encourage other women to do the same. Something that isn't always easy to do for women especially who already may have hangups about the shape of their bodies.

Elise wants to make sure pregnant women have the support they need to deal with it.

It can be a traumatic experience to watch your body change so rapidly, and to not fully understand if and when it will change back. As Elise notes, she didn't have many friends who understood what she'd gone through, so she wants her posts to be a source of comfort for other women who might be confused and ashamed of their postpartum state.

Other women on Instagram have also shared their postpartum stories.

Instagram is full of posts about fitness, and also body acceptance, so it's refreshing to see a combination of the two. Women have been sharing the often complicated feelings surrounding the changes their bodies have gone through. From women who are used to having rock hard abs, who've had to learn to appreciate a different kind of strength.

To women who feared the worst and didn't get it.

All women's bodies are different, and as such they handle pregnancy differently. Some women shrink faster, though obviously not all the way, depending on their specific bodies and pregnancies.

It's not an overnight transition.

Women sharing their stories have shown that there's more to this than just "before" and "after". The process of recovering from nine months of pregnancy, as well as giving birth, is a long one in which a woman's body can change in all kinds of ways.

But these moms all agree it's worth it.

While body image struggles exist for nearly every woman or every shape, pregnant women are dealing with a dramatic and sometimes overwhelming change. But luckily they've got a reward waiting for them at the end that's simply priceless.