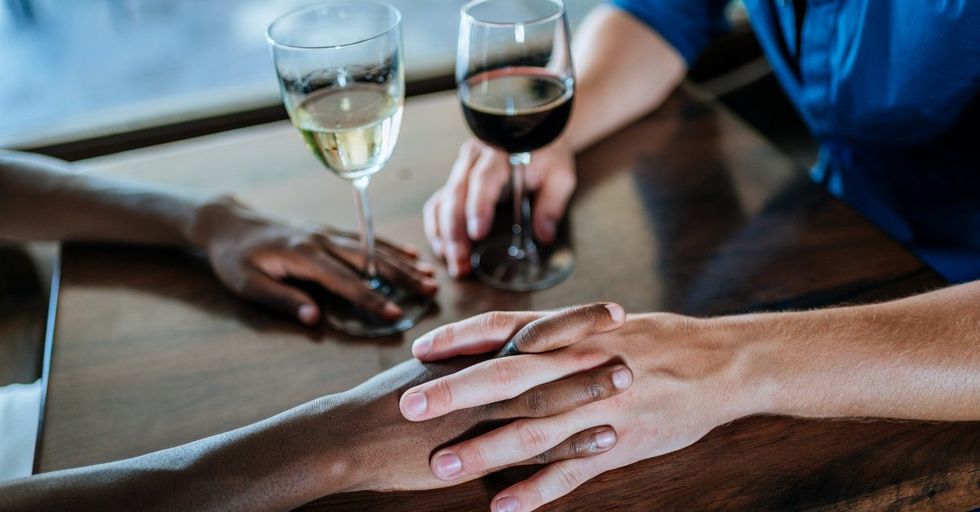 Societies, cultures, and populations tend to change and evolve slowly, sometimes too slowly for us to even notice. But sometimes, social changes shift fast enough to make curious scientists and economists to wonder why. Turns out, the recent increase in interracial marriages — a pretty big deal on the broad spectrum of social change — might stem from an unlikely source.

Dating used to involve going out into the world and interacting with people.

Our dating pool was influenced primarily by location, proximity, and social connections. Couples met at school, work, church, and through friends. This generally limited the diversity of potential partners. It makes sense, if you think about it: as neighborhoods, schools, workplaces, and social networks tended to be racially homogeneous, people ended up dating and marrying within their own race.

The homogeneous pool of potential partners mirrored the social norms of the day.

Interracial dating was once uncommon, and extremely unlikely to be accepted. In the 1950s and 1960s, a slow shift started to take place. More interracial couples began to appear in metropolitan areas, among the well-traveled and well-educated, and among the rich and famous.

Long-standing social morays were questioned and challenged as society integrated, exposing us to different types of people and lifestyles — and more interracial families.

Pop culture of the time reflects this. I Love Lucy debuted in 1951. Initially, CBS wanted Lucy only, thinking the American public would never accept her Cuban husband, Ricky. Ultimately the couple was widely loved despite their interracial marriage. The film version of West Side Story was released in 1961. The musical centers on the forbidden love between Maria and Tony, a Puerto Rican girl and a white boy in New York. Their story ends in tragedy, leaving the audience to ask themselves if such unfounded hate and separation is worth it.

It was more than proximity and social norms that impeded interracial relationships.

It wasn't until 1967, in the case of Loving v. Virginia when the U.S. Supreme Court reached the unanimous and groundbreaking decision which invalidated any laws prohibiting interracial marriage. As soon as it was legal to marry a person of a different race, interracial marriage rates grew. For the most part, proximity and social connections were still the biggest factors in meeting potential partners, which meant that people still mostly dated and married within the same race.

With the advent of online dating, suddenly people were no longer limited by proximity or other social connections.

Without needing to rely on work, school, or friends, people were able to meet complete strangers from wholly different backgrounds. A new study from University of Vienna economists Josue Ortega and Philipp Hergovich suggests that this has led to a steep increase in interracial relationships. They concluded that “when a society benefits from previously absent ties, social integration occurs rapidly." Stephanie Afful is a professor of race relations at Lindenwood University in Missouri. She explains her take on the new study: “If we look back 50 years, the biggest predictor of attraction and who we might date or start a relationship with was proximity, so physical distance. You were more likely to date someone who worked with you, went to the same school with you, lived in the same neighborhood as you. But now with social media and these dating apps, we have a much more diversified heterogeneous dating pool. We are likely to meet people who are different from us who live in a different area. And we would have not had that opportunity, had we not met online so I think it is, in essence, diversifying our dating pool." Is the jump in interracial relationships truly a result of new dating technology? Or have interracial couples become more widely accepted? Or maybe it's just that we live more integrated lives now?

Seeing interracial couples on TV and in movies is no longer unusual.

More and more, onscreen relationships reflect a diverse range of races, sexual identities, ages, and family situations. What may have once been considered taboo is becoming the new norm. It's still a work in progress. For whatever reason, most black-and-white couples portrayed on film involve a white man and a black woman. Idris Elba, the British actor whose on screen love interests have run the racial gamut, said: "Change is incremental, OK? First, you can’t have a black guy kissing a white woman. But then you can have a light-skinned black kissing a white woman. And then it changes, you know?" It's true; we've come a long way since Lucy and Ricky — but that was nearly 70 years ago!

Whether the increase in interracial relationships is due to online dating or not, it's definitely happening.

According to Pew Research Center, 17 percent of U.S. newlywed couples were interracial in 2015. That's one in six newlyweds, which is a fivefold increase from 3 percent of newlyweds at the time of the Loving v. Virginia ruling in 1967. When looking more broadly, beyond newlyweds, 1 in 10 couples in the U.S. includes a spouse of a different race.

It's difficult to tell if Hollywood is leading or following the trend, and it probably doesn't matter.

According to the Pew Research data, other contributing factors that influence interracial marriage rates include location (metropolitan vs. non-metropolitan), education level, and race itself. The rates that white, Asian, Hispanic, black, and multiracial Americans intermarry varies. If you're interested in seeing the data, click here.

The new findings are attracting a ton of attention.

Online dating was once much-maligned despite its proven track record. The idea that this technology is changing our culture so much is fascinating. Interracial relationships lead to multiracial populations, and an uptick in both might just lead to greater human acceptance, understanding, and even social equality. So, keeping swiping and poking and doing whatever else online dating apps have you doing, America! Social progress may happen slowly, but it is happening.