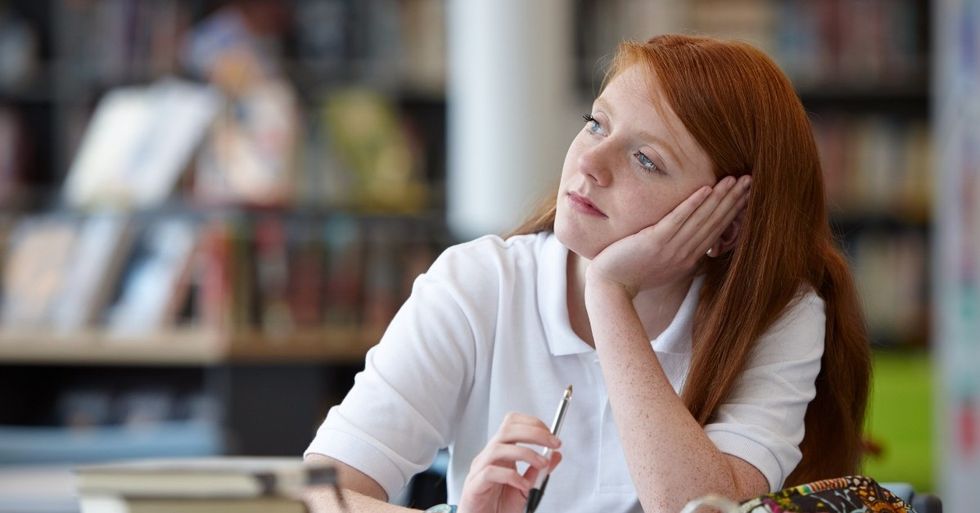 Are you someone who tends to zone out and get lost in thought? Well, after a lifetime of being told to pay attention, there's some good news for the daydreamers out there. This new study from from the Georgia Institute of Technology suggests a correlation between daydreaming and increased intelligence, and it's sweet vindication for many of us!

The world is generally not a friendly place for the daydreamer.

In school, teachers purposely ask questions when they know a student has tuned out; they chuck erasers and chalk at repeat offenders; and write on every report card about lost potential and lack of focus. Daydreaming has always been seen as a negative — a sign of laziness, an inability to concentrate, even plain dimwittedness.

A new study out of Georgia Tech suggests that it's not slow, disinterested minds that tend to wander, but more intelligent and efficient one.

Take that, middle-school history teacher! Scientists studied the brains of 100 people who were told to stare at one specific point for five minutes while in an MRI machine. This allowed the researchers to study which parts of the brain were active while the mind was at rest. Christine Godwin, a psychology Ph.D. candidate and co-author of the study, explained, "The correlated brain regions gave us insight about which areas of the brain work together during an awake, resting state. Interestingly, research has suggested that these same brain patterns measured during these states are related to different cognitive abilities."

"People with efficient brains may have too much brain capacity to stop their minds from wandering," said Eric Schumacher, associate psychology professor and co-author.

Study participants also took tests that measured their intellectual and creative abilities, and filled out a questionnaire about how much they tend to daydream. Those who said they daydreamed more did better on the tests. The MRI results indicated that the minds of the daydreamers appeared to be working more efficiently. Thus: daydreaming = smarter + more creative + more efficient. Hurrah!

The study suggests that increased brain efficiency is what leads people's mind to wander.

Professor Schumacher explains, "People tend to think of mind wandering as something that is bad. You try to pay attention and you can't. Our data are consistent with the idea that this isn't always true. Some people have more efficient brains." These efficient brains complete tasks faster, or grasp new information quickly, and then are free to move onto other things. "Mmmmm. Pistol whip..."

So, if you tend to tune out, zone out, and daydream, take heart! Your brain may just have too much efficient capacity.

"Our findings remind me of the absent-minded professor — someone who's brilliant, but off in his or her own world, sometimes oblivious to their own surroundings," said Schumacher. Next time your boss or your mom or that incredibly dull person at a cocktail party chastises you for tuning out, let them know that your brain is so quick and efficient that it's impossible to avoid getting distracted.* *Not a good way to get promotions or friends.