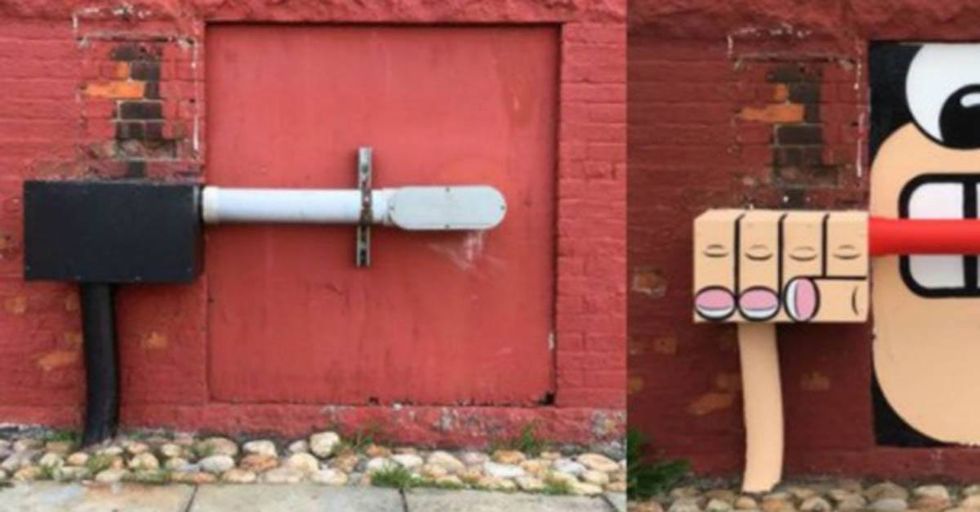 Then he's illustrating them, so that every passerby can enjoy his wonderful imagination and talents.

It's human nature to take your surroundings for granted.

But if you stop to study what's around you, a new perspective emerges. Some people can see a whole new world.

Street artist Tom Bob seems to have that gift and talent the talent to bring it to life.

He's making the most out of it with these sometimes-simple, sometimes-complex creations. This is a simple one:

I mean, what do YOU see here?

Chances are you're not seeing anything TOO extraordinary.

You're just not looking at things the way Tom Bob is.

A random water pipe becomes an elephant. As you can see from this pic his style veers towards the cartoony, which is a departure from much of the edgy fare street artists often create for the sake of credibility and "coolness."

Animals are a popular theme.

A water main gets turned into something a lot more engaging for passersby. And while NYC residents may see lots of pipes, a creation like this stands out and enriches their day for sure.

Whatever this is certainly doesn't do much to add to the setting's aesthetic.

But that's just because Tom Bob hasn't worked his magic yet.

There. That's better. And a lot more memorable.

Unfortunately, much of this work is technically considered vandalism since he's "defacing" property that isn't his. But it's hard to argue that he's really harming it.

Wherever you stand on that issue, the fact remains that his work doesn't last long once it's up.

I mean, this isn't exactly a museum he's working in. It's open air in a big city. It's meant to be touched, altered, and maybe even covered up. It doesn't belong to him when it's done — it belongs to the neighborhood.

It's such a fun marriage of boring city infrastructure and the surreal and fantastic.

He's not above some clever wordplay!

What's remarkable about this is that he's able to produce it without jotting down a single word!

We'll leave you with one more.

Why stare at a plain ol' propane tank when you could have this to marvel upon? The owners must have done a quadruple-take when they saw this thing!