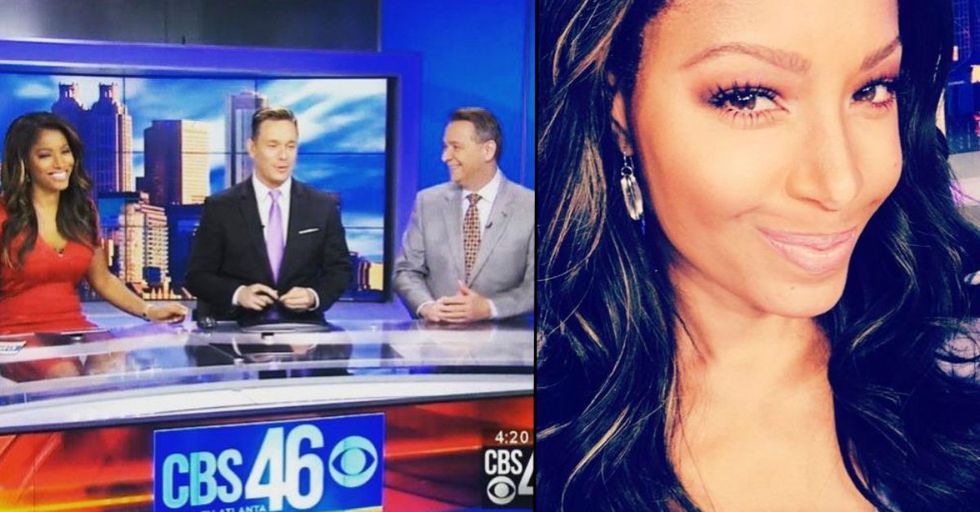 If you’ve ever wished you could tell off internet trolls in real life on some sort of large public platform, get ready to watch one woman live your dream.

Except even better, because in this case it wasn’t just a rude comment, it was an outright personal, racist attack. And this Atlanta news anchor handled it in the best possible way. She's pretty much our hero now.

Sharon Reed is a local news anchor at CBS46 in Atlanta.

This week on the show, the team was discussing the Atlanta mayoral race, which has brought up some frank discussions about racism in the city.

During a segment called Tonight’s Talkers, Reed received an email from a woman named Kathy Rae.

Kathy Rae wrote an email to Reed to share her opinion that Reed should be fired for comments that she said on the show.

Wasting no time, Reed decided to read the email right on the air.

Reed looked into the camera and read the email directly. She felt it was important that viewers heard what Kathy Rae felt the need to write to her. Reed does not mess around.

The email used a racial slur.

Kathy Rae’s email read: “You need to be fired for the race baiting comment you made tonight. It’s okay for blacks to discuss certain subjects but not whites…Really, you are what I call a N***r not a black person. you are a racist N***r. you are what’s wrong with the world."

Reed read the racist email and then, like a boss, looked into the camera and addressed Kathy Rae directly.

Reed said she could clap back if she wanted to, but she was going to let Kathy Rae’s words speak for themselves, which they did. Basically, Sharon Reed is a class act and a national treasure.

In a later interview with a local radio host, Reed talked about her quick decision to read the email on air.

In an interview on The Rashad Richey Show, Reed said of the incident, “As soon as that bubble popped up, and I read it, I immediately said to the executive producer, get this on and I want you to use her name."

She also commented that this kind of thing was commonplace for a black person in her field.

“Anybody who is in this business that I’m in, that you’re in, this is nothing new," she told Richey. But it shouldn’t be that way. Which is why it's so great when people like Reed call it out people who are being racist.

Kathy Rae had spelled the slur incorrectly, but the intent was clear. Reed wanted viewers to see exactly what Kathy Rae had felt the need to write to her for full impact. But even without seeing it in full, Reed’s delivery and bravery is incredibly effective.

Reed also went ahead and made the unedited email the background image of her Facebook page.

Just in case there was any confusion.

The video is just so satisfying.

Every time we watch it, it gets better. Here, watch it again. Or a few more times. All hail Sharon Reed.