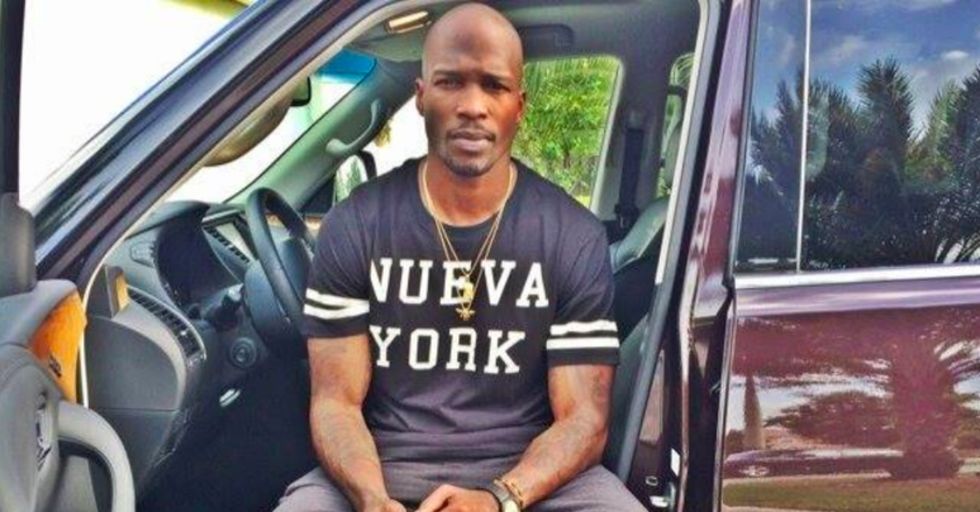 Parenting. You can read fifty books about it and still not really know what's coming until you bring your first baby home. At first, it's all daunting. How often do you change them? Which diapers should you buy? How the heck does a baby monitor even work?

Like any full-time job, parenting has a steep learning curve at first, but, over time, you start to build up a bag of tricks to deal with all the sticky (literally and figuratively) situations that arise. One NFL star recently showed everyone that he's not only a great athlete, but that he's got parenting hacks to spare.

Foraging into unknown territory is exciting.

Sure, expecting a baby is an unknown for a lot of people, but once that test turns positive, excitement has a way of reigning supreme. People have been doing this for thousands of years. You got this. There's a tummy panel on your pants, but you have everything under control. That baby's gonna be just as good-looking as you. Awesomeness all around.

As a parent, you're over the moon when the big day finally arrives. Newborns are sweet, cuddly, and smell amazing. Riding the newborn high is a real thing and makes all the work it took to get there worth it. Family is smothering you and the baby with love, affection, and gifts. Smooth sailing all the way.

When we find out we're on our own, it can be a bit of a shock.

It's nothing short of mind-blowing when the doctor and nurses send a new baby home with equally new parents. You're not only not a doctor or nurse — you have no medical training at all. And people trust you to keep this freshly minted human being alive. On your own. What are they thinking?

There are tons of handbooks on how to raise new babies, but that doesn't stop you from staring at your little miracle and wondering, "What the heck do I do now?" It's on-the-job training at its best, except there's no boss, supervisor, or mentor there to tell you if you're doing right. In those first few months, stumbling around in a parenting mind-fog is pretty much par for the course.

Pretty soon though? You're a bonafide rock star.

It doesn't take long before you find your groove. Throughout sleepless nights, lots of dirty diapers, and crying jags, you made it. You're starting to feel like you can do this. New parents soon become savvy parents, and what once seemed like great mysteries of the universe are all things that can be dealt with in a day.

The student becomes the teacher. Thankfully.

By the time a new baby becomes a toddler, most parents are well into the swing of things. Mental meltdowns and tantrums are no match for a well-seasoned pro. Bedtime? Check. Getting ready for school? On it. Sharing the TV with someone who only wants to watch The Wiggles on repeat? Eh, you'll ride it out.

This NFL dad is not only well-seasoned, he's got parenting tricks you'll want to steal.

Chad "Ocho Cinco" Johnson, is a household name for NFL fans. Famous for his quick moves on the field (for the Bengals, Patriots, Dolphins) and his commentary off of it, Johnson is no stranger to fame, fortune, and balancing the busy life of a professional athlete. His witty posts on social media keep his fans thoroughly entertained. But football and social media aren't the only things he excels at.

Sometimes, outsmarting your kids is the key to smooth parenting.

"when you shop for your kids make them carry their bags, they'll think twice before picking up a bunch of stuff nex… https://t.co/udYjIWmEuN
— Chad Johnson (@Chad Johnson)1507225038.0

In a now-viral video, Johnson films his daughter as she struggles to carry all her new goodies out of the store. The footage pretty much drips cuteness, as its star tries to hoist shopping bags much bigger than she is out the door. The savvy father says this is a great way to make kids "think twice" before asking for everything in site. Not a bad strategy at all. The little tyke definitely looks like she's reassessing her need for so much stuff after having to haul it all out the door. We've all been there.

A good lesson for life is that all those fun things someone just bought you? Yeah, they can be returned.

Johnson's daughter learned early that a shopping spree can be reversed very quickly. Followers of the NFL pro were doubling over at the little lady's reaction after she, fed up drops her bags, and her dad assures her he "can take it all back." A hilarious, conflicted look spreads across her face, and she decides to walk back and reclaim her treasures instead of leaving them behind.

The video reminds us a little bit of ourselves.

Twitter user @f0reverjasmyn not only liked Johnson's adorable video, but she also brought up a scenario almost all of us can relate to: the little tot's struggle to get shopping bags from the car to the house — in just one trip. It's the shopping equivalent of summiting Everest. We try, and only sometimes we conquer.

The main lesson here is that all parents find teachable moments in everyday life. Some of them cuter than others.

The overall appeal of Johnson's irresistibly cute video is that it's every parent's experience on a given day. Kids are cute and frustrating, all the time. We love them intensely, but it doesn't change the fact that we also need to stop and teach them to carry their own stuff. Because that ridiculousness is exhausting.