This Nobel Prize–Winning Chemist Has the Most Unconventional, Hilarious Resume We've Ever Seen | 22 Words 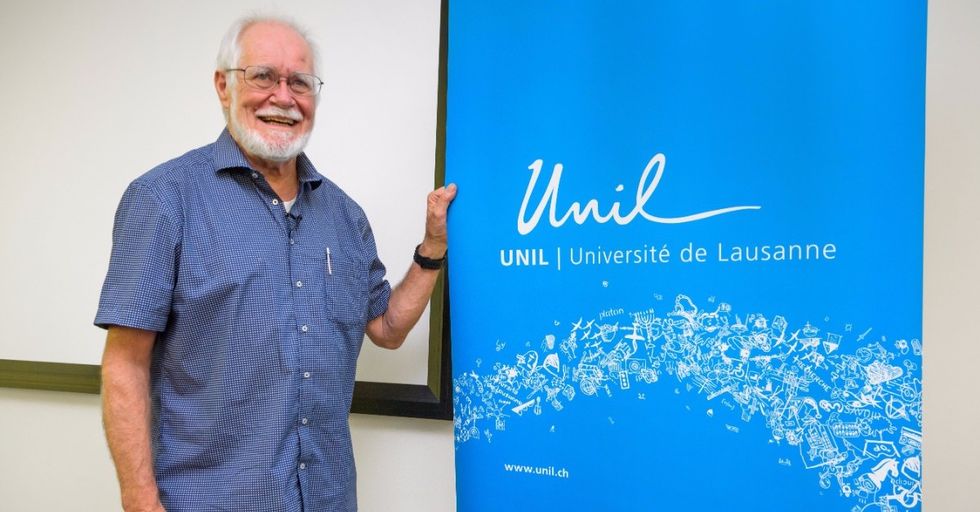 This Nobel Prize–Winning Chemist Has the Most Unconventional, Hilarious Resume We've Ever Seen

When you're old and retired you're afforded a new kind of freedom. The freedom to give no more f*cks. When you're the best in the world at what you do, you also have that freedom. Same goes if you're smarter than everyone else. Jacques Dubochet is a lucky man because he falls into all three categories. His official curriculum vitae listed on the University of Lausanne's website demonstrates this freedom, and his terrific sense of humor.

Meet Jacques Dubochet, winner of the 2017 Nobel Prize in Chemistry.

He's better than any chemistry teacher you ever had. In all ways. He's smarter, nicer, and a hell of a lot funnier. Dubochet earned the esteemed prize for his work developing cryo-electron microscopy along with joint winners Joachim Frank and Richard Henderson.

Cryo-electron what now? Dubochet's joint winner Frank explains in this video, and you still won't know.

Frank is probably a very nice man. And he's certainly a super smart scientist. Our favorite part of this clip of the two men reacting to their Nobel win isn't Frank's explanation of what structural biology is, but Dubochet's bit about collaboration versus competition.

Dubochet's stance on this sets him apart in his field.

In the world of science and research, unfortunately, competition is king. Huge monetary rewards await the next great breakthrough in biological or medical research. Competition leads to secrecy rather than openly sharing ideas and information, because the people funding the research are driven not primarily by the quest for answers, but the quest for patents. But Dubochet's love of science isn't driven by personal gain and instead just his pure, insatiable quest for knowledge.

Here's another partial explanation of cryo-electron microscopy. You still won't understand it necessarily, but you can see that Dubochet loves it.

To speak of the study of molecular structures so beautifully speaks to his passion for his work. This is a serious man, doing serious science, and he loves it. He also has a less serious side. A pretty big one.

He's won the Nobel Prize now, and is at the very top of his field.

His lifetime of scientific work is beyond reproach. The 76-year-old chemist is not seeking employment, admission, or approval. He's beyond those petty cares. Time for some silliness.

He pairs his Teva-style sandals with his black dress socks and strides confidently through the world.

And with that flair for style and confidence, he writes the funniest resume we've ever seen. When you're at the top, you can do what you please. Although, by the look of this resume, we have a feeling that he probably always got away with doing as he pleased.

Keep in mind, this is from his official page on the university's website.

Any good CV should start at the beginning, right? Dubochet takes that literally. At least he didn't provide more details of said conception. I hope his parents were not only optimistic, but also in possession of excellent senses of humor.

Good thing we forcefully spit out our coffee with the first entry, because this is the second line item on his resume.

Here Dubochet deftly combines his irreverent sense of humor with his career of scientist and teacher. A shoutout to Copernicus totally makes it OK for a Nobel Prize–winning scientist to mention overcoming his fear of the dark on his CV. Also, he's clearly always been gifted, because he was only 5 years old when he came to terms with darkness.

Then we come to 1968 — an important year for many people. I guess. We don't know why it was important to Dubochet, but it's not for us to know.

This one follows a few other entries: 1948–55 1st part of an experimental scientific career in Vallis and Lausanne (instruments: knives, needles, strings, matches). 1955 First official dyslexic in the canton of Vaud — this permitted being bad at everything ... and to understand those with difficulties. 1962 Federal maturity exam. 1967 Physicist-engineer at EPUL to become biologist.

The '70s were tough for a lot of people.

Is there any among us who wouldn't be better off today had we spent six years devoted to psychoanalysis? Dubochet's resume ricochets between absurdity, hilarity, and real entries. Immediately after the 1970–76 entry, he writes:

So that's definitely real and super-resume-y. Just before it, the entry reads:

1973 Thesis in biophysics at Geneva and Basle with Eduard Kellenberger who taught me biophysics, ethical responsibility and durable friendship.

Awww, he has a friend! I want to talk about my friends on my resume. His quirky resume is getting some media attention now that he's been awarded the Nobel Prize.

As the accolades and congratulations roll in for the three joint winners for their work that I cannot explain, people are taking note of the unconventional CV.

How long has this been his CV on the university website? To see the full resume, in all it's faux-serious glory, click here. A hearty congratulations to Dubochet et al., and thank you, Professor, for not taking yourself too seriously. Your parents had every right to be optimistic.