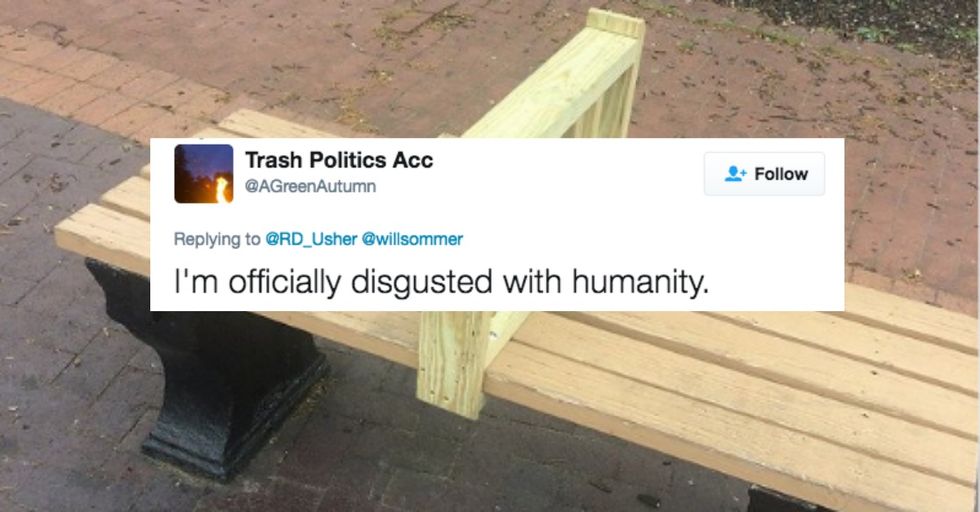 Washington D.C. Just Installed Bars on Its Park Benches to Ward off the Homeless

This might just look like a bench, but it's actually being seen as a symbol of a greater social issue by a lot of outraged people.

As you can see, someone nailed down wooden dividers to every bench in Lamont Park in Washington D.C. without authorization, with many citing the act as a perfect example of hostile architecture. What is "hostile architecture?" As Popular Science explained, hostile architecture involves making public spaces "intentionally repellent," in an effort to discourage "certain uses of spaces and things, often by specific, targeted demographics."

That demographic, unfortunately, is usually the homeless. In other words, they don't want them to be able to sleep on the benches.

After residents complained to the authorities, the Department of Parks and Recreation (DPR), said the wooden dividers have been removed and thanked D.C. residents for keeping them informed.

But the incident highlights a broader issue of homelessness — and how people are treated — throughout the world.

There are many examples of government-approved park benches, bus stops, etc. meant to provide seating that are intentionally designed to be restrictive to anyone who could use the space for long periods of time.