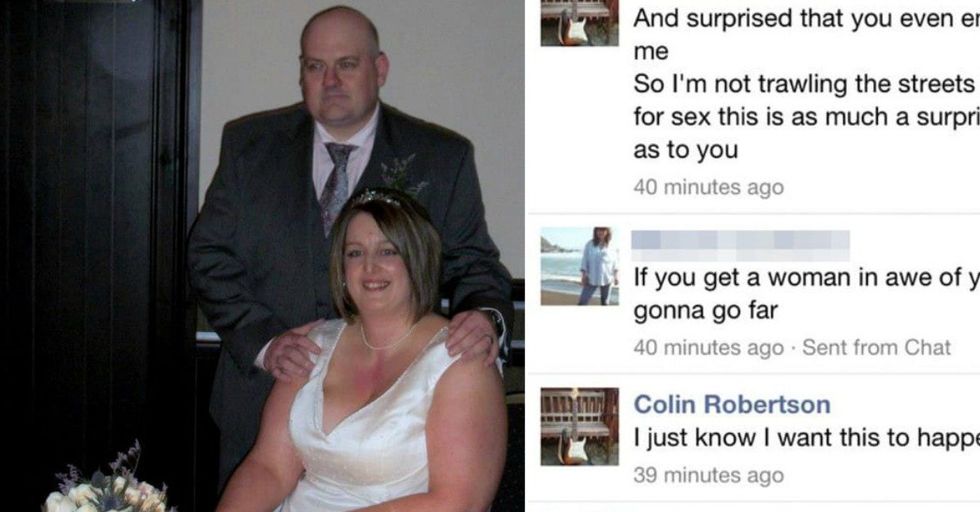 They say be careful what you snoop for because you might just find it, as one newlywed found out the hard way.

But before that shocking discovery, there was marital bliss for Sharon and Colin, who met in 2000.

The pair from Fort William, Scotland, dated for many years until Colin finally popped the question in 2011.

The next year Sharon had the wedding of her dreams.

Things were all "happily ever after"until Colin took a job at his local supermarket.

Colin worked at a warehouse among a male-dominated crew, but to help pay for the wedding, he took a new job at Sainsbury’s, his local supermarket.

He suddenly found himself in the presence of more women as coworkers, and you can probably see where this might be going.

Sharon said it seemed that the once shy Colin gained a newfound sense of confidence, among other things, at his new place of work.

“It was as though a switch had been flicked and Colin was a new man," she said.

It wasn’t until Sharon noticed Colin spending more time on his cell phone than with her that her suspicions grew stronger.

And Facebook has begun to gain quite a reputation as a destroyer of marriages...

Now, some people may say that's wrong, but she did find something. So was it justified?

Snooping through your significant other's social media is a pretty hot-button topic.

But if they snoop and actually find something, who is in the wrong? Both of you, or just the person cheating?

It was there that she found private messages between Colin and three separate women whom she didn’t know, with him even making plans to meet up with them.

And this is just three months after getting married.

Three months is barely enough time for the honeymoon phase to wear off.

Needless to say, Sharon was less than thrilled at this discovery and decided to do something about it.

And she did not hold back.

“I saved the messages from the one woman and I let her know she was welcome to him over Facebook," Sharon said.

Just like that, ten years of dating and three months of marriage went down the crapper, as she quickly filed for divorce.

She even kicked him out of their house!

Show that loser who's boss!

She wanted to tell her story to warn other women to be “on the lookout" when their husbands or partners make a change in their normal routine.

True, it could be nothing, or the dude could be trying to pimp himself out on Facebook.

So while this isn't a lesson to start snooping through your significant other's phone...

It is a lesson to keep an eye out for any changes in behavior with your partner.