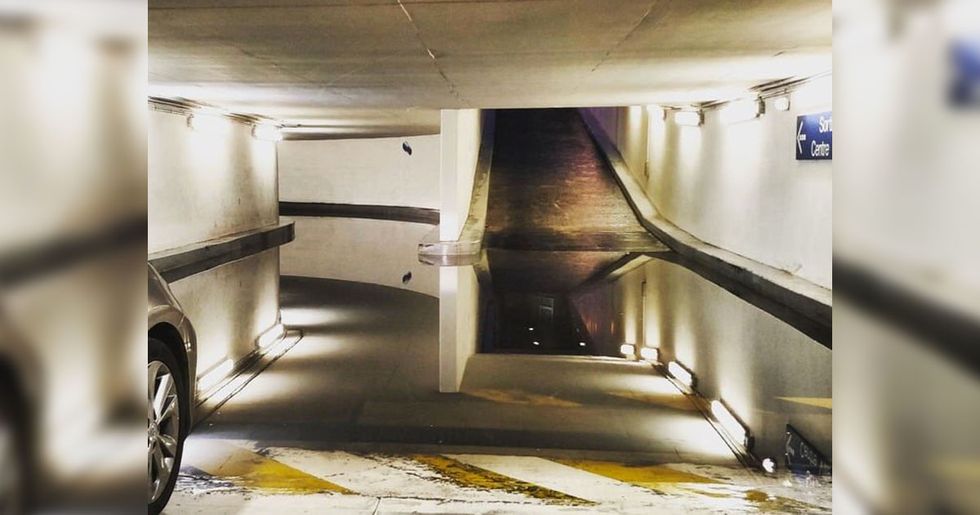 This Photo of a Parking Garage Is Seriously Confusing People

Have you ever seen something that confused you beyond belief? The kind of confusion where you had to do a double take, unsure if what you were seeing was in fact what you were seeing. There's something so completely disorienting about it when it happens; it's as if our mind is playing tricks on us, but we can't figure it out. We swear that what we're looking at is really there, even though it's throwing our mind for a loop.

Optical illusions are trippy – there's no denying it. And even though we know it's a trick of the eye, it still gets us in our head. It's so hard to unsee something once we're convinced we've seen it correctly. It's even crazier to think about the fact that people see things differently; something that looks one way to you can look completely different to somebody else. Like a puddle in a parking garage, for example.

Who else is obsessed with optical illusions?

Optical illusions can be quite funny.

Like, is this a tunnel or are we all a bunch of perverts? Who else sees a bum wearing black bikini bottoms?

Some of them are super trippy.

This one took me awhile. It seriously looks like those cars are driving down the street.

Who else thought this was a body of water?

Not a body of water, but a concrete wall! How? Why? My head hurts.

Believe it or not, this is a completely flat carpet.

Quite the interesting design for carpet, isn't it? How many people trip when they're walking in this hallway?

At first glance, this could totally be an owl keeping tabs on you. But perhaps it's just the wings of a moth?

This definitely looks like a road with some bumps. Whose idea was this?!

There are some optical illusions you could just watch for hours.

I can't stop watching. This video is so addicting.

What happened to the other part of this wall?

How is this real?! Where did the wall go?

In front of or behind these bars?

It looks like it could easily be both. But which is it? Someone, tell us the truth!

The lines on the paper aren't overlapping...

This is such a good one. I really thought someone drew the lines overlapping.

The gray spots though...

Can you spot the gray spots? They're everywhere! They won't stop moving!

Are these about to tip over?

Nope. They're sitting flat. Oh, the power of the eyeball.

This may be the trippiest of all. It's had people all over the Internet squinting their eyes.

No, that isn't a tunnel in a parking garage! It's actually a puddle, reflecting the top of the ceiling. The puddle is huge, so it makes it look as if there's a secret, underground tunnel. Who wants to go explore?

To help out in understanding, somebody made the puddle black.

You can see how it looks with the puddle. Very, very strange. I now understand why the people across there Internet were so puzzled – this one is tricky. Let's see some more!

Does anybody else feel as dizzy as I do? Smoke and cauliflower look suspiciously similar.

You have the power...

If you stare long enough and focus up, you can make the figure spin either way. We're all magicians.

Nope. It's just a curtain.

It's just a picture. But it's moving, right?

This boat is flying...

The ocean is a tricky place. The light water makes it look like this ship is part of the sky.

This makeup is wild...

Her eyes are actually closed. Makeup can truly transform a person.

As the caption says, nothing is what it seems. Indeed.

And it's very, very cool. The beauty industry is constantly evolving.

Is this building 2D?

Or is it all just a trick? Who can really say.

The core strength is strong with this one...

But seriously, this is very impressive. Can this child be my personal trainer?

Is she a giant? She's a giant, right? That has to be the only explanation.

This dog is floating.

And that's totally not a stain, but a shadow. Right, right. (Spoiler alert: the dog is not floating. Just FYI.)

When art becomes terrifying. Run for your life!