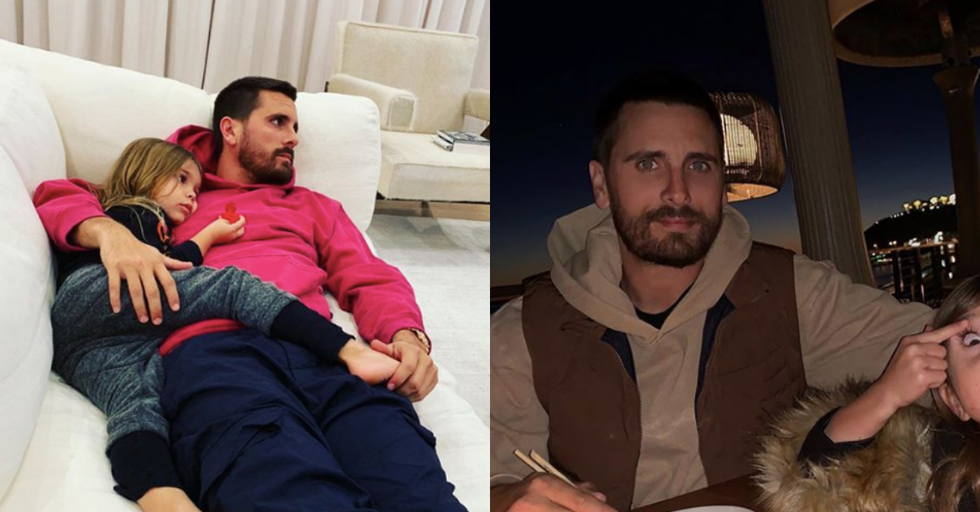 Scott Disick is a somewhat polarizing public figure. Some people love him for his larger-than-life personality and constant bemusement at the Kardashian/Jenner antics, while others find him to be a rude egomaniac with too much money and little-to-no actual talent.

And while Disick is no stranger to controversy, he's in the news again, but this time for something his daughter is accused of doing in a Japanese restaurant. Keep reading for the full story and to make your own decision on the divisive photo.

Scott Disick is not one to stay out of controversy.

This infamous 2010 episode of KUWTK included a scene that's difficult to forget: A ridiculously drunk Disick getting deliberate with an innocent waiter for unknown reasons and then proceeded to shove a wadded up $100 bill down his throat. Classy!

Or the time he punched a mirror in Miami,

During a disagreement with then-girlfriend Kourtney about smoking pot in their apartment, Disick's anger got the best of him and he smashed a mirror to pieces. The incident was featured on Kourtney and Khloe Take Miami, leaving many fans to wonder about Scott having an anger problem.

This incident happened shortly after Kourtney gave birth to their daughter Penelope. He decided it would be a good idea to go on about how she looked when they first met, and how different she looks now with the added baby weight. The remarks later made Kourt cry. What a guy!

Oh, and let's not forget the countless times he cheated on Kourtney, the mother of his three children.

Not only is it totally gross that a then-33-year-old man would date a teenager (she was 19 at the time), but Scott also thought it would be a good idea to fly Bella Thorne to France for the sole purpose of the two of them being able to get wasted together.

That time he invited a random woman on the family vacation.

Does the name "Chelsea" ring any bells? You might remember it from the 2017 KUWTK episode where the Kardashians invited Scott on their family vacation even though he and Kourtney had broken up in order to make him feel included. And he invited a mysterious woman name "Chelsea" to come too without consulting anyone else. Great idea, Scott!

AND that time he forgot his daughter's birthday!

Okay, this one is just plain sad. In July of 2016, Scott's adorable daughter Penelope turned four years old. She celebrated in typical four-year-old fashion, with a giant party in the Bahamas. But there was one important person missing from the festivities – Scott Disick,  who also failed to post anything on social media about his only daughter's big day.

I could go on and on, but luckily, Scott seems to have been avoiding negative publicity for the last few years.

That is, until a photo that he posted on Instagram sparked a heated debate on social media, with many users calling out the so-called "celeb" for his daughter's racist gesture.

This photo was posted to his account on January 2nd of 2019.

At first glance, it looks like an adorable photo of a daddy-daughter date with his little mini-me making a goofy face. He captioned the photo "Best first date of 2019! ❤️?"

Soon, however, the negative comments came rolling in.

Several people were offended by the photo and accused young Penelope of pulling her eyes back in a way that would be derogatory to Asian people.

Many people blamed Scott directly for not correcting his child.

Instagram user @lagaratica condemned Disick for his decision to post the pic in the first place and draw attention to something that could be taken as racism.

Another user called on Scott to make a public apology.

They also commented on how disrespectful this gesture was to make while in a sushi restaurant, of all places. "In a Japanese restaurant, any white person lifting up eyelids is committing a racist act."

One person blamed both Scott and Kourtney for their daughter's behavior.

"Her not knowing that pulling her eyes back is offensive is not an excuse for her PARENTS," said @missamal93. "They should have said something."

Others, however, saw the photo differently.

This user, who claims to be "Asian AF," saw no offense in the gesture. They claimed that the direction in which she was pulling her eyelids was what made all the difference.

Others called out the outraged commenters for being too sensitive.

Eluke3 chalked up the photo as nothing more than "a child making faces," and that people were making too much of a big deal out of "a man having dinner with his daughter."

Others demanded that everyone leave poor Penelope alone.

"Come on guys she's young," said one commenter, which another condemned online trolls for refusing to let this little girl grow up without being "traumatized" for making a "funny face."

Response to the photo continued over at Twitter, as well.

"IT IS SHAMEFUL!" said outraged user @naliastyles, who also tagged Scott, Kourtney, and (for some unknown reason) Kylie Jenner in the post hoping to get a response.

Twitter user @ashleycam2883 seemed disgusted by people who she deemed to be "picking on children." "People need to grow up and talk about real issues."

She compared Penelope's goofy face to the faces her own children make in an effort to gross her out, stating point blank that "it's not racist." "She's acting like a six year old."

Still not finished expressing herself, user @ashleycam2883 has more to say on the matter.

She blames the outrage on people like Perez Hilton, who doesn't seem involved in the story at all, and claims that "if something a child does makes you uncomfortable then you really need to take a hard look at yourself."

User @MummaMumma2016 had a different but no less warranted take on the photo.

This "gf" she's referring to is Sophia Richie, the 20-year-old model, daughter of Lionel Richie and current girlfriend of Scott Disick. Sure, she doesn't look like a six-year-old, but you can see why this user might have made this mistake.

Kourtney herself isn't immune to being called out when it comes to her kids.

And as quickly as people jump to criticize her parenting, this outspoken celeb is just as quick to shut down their mom-shaming. It's a thing of beauty, actually.

There was the time she was called out for taking a photo without her kids.

After posting a lovely bikini pic of herself lounging on a yacht, someone felt the need to comment "where are your kids," to which the oldest Kardashian sister delivered the perfect response. Since when do Moms need to be around their kids 24/7, anyway?!

And then there was the time she posted an innocent poolside pic and got completely dragged for it.

Here we see Kourt soaking up some rays with her kids in toe while doing some online Christmas shopping. Nothing wrong with that, right?

One user accused her of being a "bad Mom" for never hanging out or playing with her kids, while another fumed about how freezing her son must be and that she should "shut Tinder for a sec." Ouch!

Another user was outraged after discovering that her youngest child was, in fact, a boy.

"Kourt, respect yourself and your kids and cut this poor kids hair," said @katii_jz. This wasn't the first time someone called Kourtney out for letting Reign's hair be long, but she's yet to respond to the Mom-shaming.

Oh, and we can't forget about the time that Kourtney was criticized for taking a vacation.

After posting a sun-drenched bikini selfie with the caption "Sometimes you just need a day away," one user was quick to respond "But sis you never work lmao." Kourtney then proceeded to completely eviscerate the commenter, ending her response with "God bless you and your worry about me." Go, girl!

Both Kourtney and Scott were called out after Scott posted this adorable pic with his son, Mason.

“All that money and y’all cant do something w that poor kids eyebrow!" was one rude response. Seriously, can we stop telling parents what to do with their own kid's hair?

Neither Scott nor Kourtney have responded to the sushi restaurant photo controversy.

While we'll probably never know if Penelope was making an innocent face or it was indeed a racist gesture, it's safe to assume that people will keep fighting about it on social media for at least another few weeks.