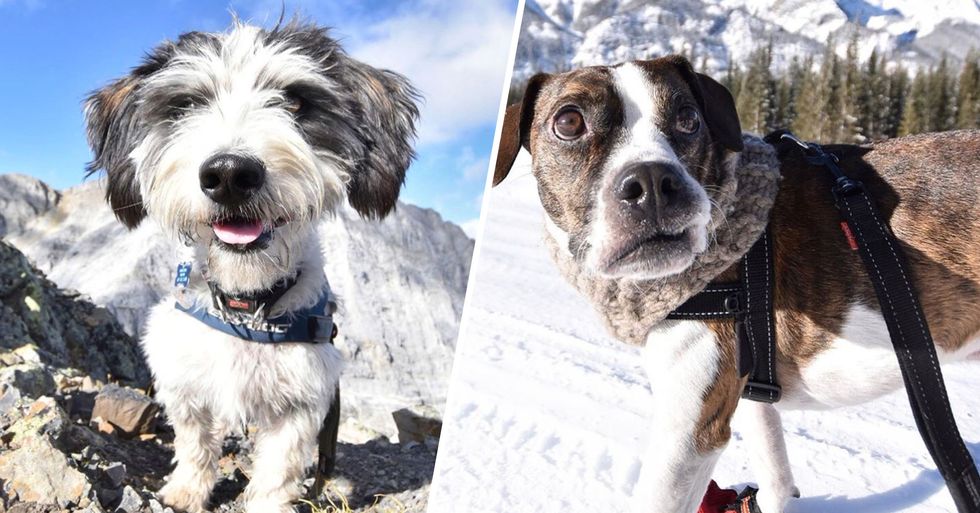 A photographer is on a quest to find homes for Canada's homeless dogs... Through Instagram.

The woman, who dedicates her spare time to staging photoshoots for dogs in need of a home, has set up "dating profiles" for hundreds of dogs and, remarkably, it's working.

Keep scrolling for the full story, and to see her incredible work for yourself...

Rachael Rodgers is a woman on a mission.

Rachael, from Alberta, Canada, decided to combine her two passions as a dog-walker and photographer to help dogs struggling to find a home.

Because, in Canada, homelessness amongst dogs is a real issue.

There are currently an estimated 500,000 dogs living on the streets of Canada, and they are all in desperate need of a loving home.

So, in an attempt to combat this...

Rachael had to get creative.

It all started when she shared a photo of her own dog, Denali...

Who was adopted by Rachael over a decade ago.

So Rachael decided to start documenting their scenic hikes and kayaks.

It turns out that Delani is quite the model.

Shots of the pooch walking through snowy mountains and sailing across glacial lakes littered Rachael's Instagram feed, so it didn't take long for her to gain plenty of viral attention.

Rachael and Delani's photos had been picked up by several dog accounts with millions of followers... And she found herself with 6,000 extra followers overnight.

It was all quite overwhelming for Rachael...

Who had never experienced any sort of viral attention before. “I had a lot more followers than I knew what to do with," she told Know Your Value.

But she was determined to use her new-found following to do some good.

She explained: “I didn’t really know why I had Instagram, so I kept trying to think of ways to use it or what to do with the followers, and then I just realized, 'They’re all dog people. Why not show them dogs — dogs that need a home?’"

Rachael decided to start showcasing homeless dogs on her page.

Combining her photography skills with her beautiful Alberta surroundings, Rachael was inspired to start staging photoshoots for dogs who are looking for a home.

Her concept is similar to online dating.

Along with some amazing photos of the dogs, Rachael also gives a description of their personalities, their backgrounds, and their likes and dislikes, of course.

From Rachael's Instagram post, we learn that this mischievous lady is 2-year-old Regeana who, despite having issues with other dogs, is "a day enhancer, and a mood booster by way of proximity."

And this is Koda.

Going by her Instagram description, Koda is quite a nervous pup from her rough start to life and would need an owner with a lot of patience who is willing to work through her issues with her.

And these 3 cuties are Rhonda, Scott, and Judy.

Rachael taught us that, despite their tender age, these pups aren't afraid of a good adventure, and will need hands-on owners who can keep up with their endless energy levels.

And just one more, for good luck...

This is Saul who, despite his size, is a "gentle and attentive" soul who "seems to gain the most joy from experiences by sharing them."

Rachael hopes that this method will enable the pooches to "find their right match."

Because too many people adopt dogs without realizing some of their individual traits and issues, which results in them being taken straight back to the shelter.

On her take on the page, she explained:

“That’s exactly what you want to do with the dog, is show them as you would an online dating profile. It’s a dog in their element doing what they love to do so that you can cut out all the not-good suitors and head right for someone who loves that kind of dog."

She has since photographed over 200 different dogs.

And, though it’s hard to figure out precisely how many have been adopted, feedback from the shelters she works with show that her efforts are helping more dogs find homes faster.

But it is no easy task.

“The behind-the-scenes is not glamorous at all — it’s a lot of driving and a lot of editing," she explained. And, on some days, Rachael has to drive for hours at a time in order to pick up the dogs from various different shelters.

And she has to work on gaining the trust of each individual shelter dog...

Which isn't always easy, considering some of their troubled backgrounds. “It’s just about stopping the car, getting out, walking around, getting down to their level, and petting them and chatting with them," Rachael said. “I talk to them the whole time. It’s just me and the dog, and I make sure that they know that I’m always paying attention to them — paying really close attention to their needs and body language."

But it is all worth it for the success stories.

Rachael shares some of her adopted dogs to the page too, with a brief description of their happy ending. "Rambo spent three years in foster homes with Beagle Paws Rescue in Calgary. It’s tough to say if he waited patiently or not, but the wait is definitely over. #adopted"

An adopted dog makes for a happy dog.

"A photo of a dog who found his perfect forever human. Finn was taken in off the streets by the Sato Project and was part of the first Dogist Rescue Ride last year. Henry signed on to foster/transport this little dog. Henry soon fell victim to the hazard of being too close to adoptable dogs that some of you know. Long story, short: he’s definitely @keepingfinn. #adopted"

If you'd like to visit her website, see her artwork, or seek some more information on adopting one of these pooches, you can do so here. Homeless dogs are always going to be an issue in our society but, luckily, more and more people are trying to put an end to it... Including a pizzeria. Keep scrolling for the full story...