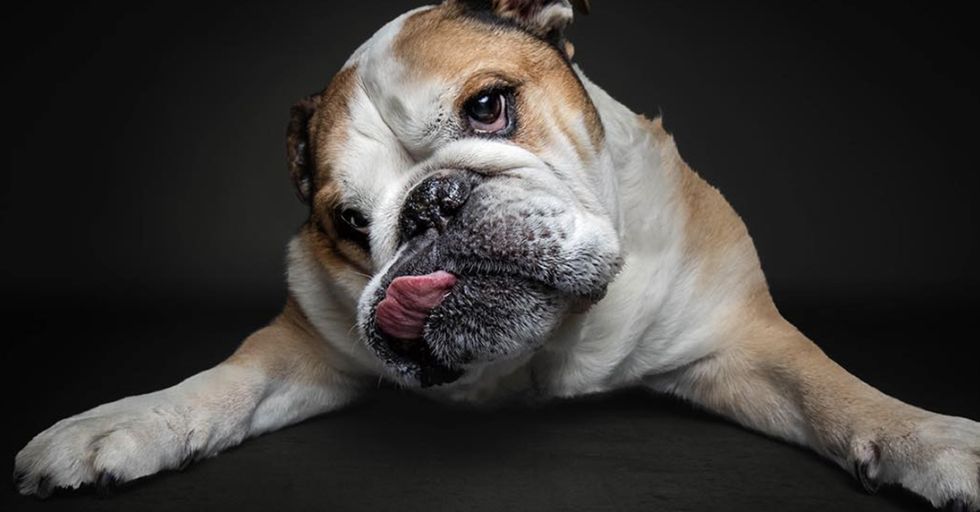 When I so much as whisper the word "treat" around my dog, he goes nuts. He could be 100 percent asleep, but if he hears "treat," within a split second, his eyes are wide open, he's doing laps at top speed around the apartment, and he's salivating from every gland in his mouth. All dogs love treats, and so one photographer decided he would capture pups in the second of pure joy when they realize they are about to have a treat.

Christian Vieler is the photographer and the genius who decided to snap photos of all different types of pups while they were catching or about to catch a treat. Every dog loves treats, but each one expresses their joy in a totally different way. These different (and hilarious) dog personalities are exactly what Vieler captures with his amazing shots. These pics will make you smile, go "Awww!" and want to snap a picture of your own pet with their eyes wide, ready to accept a treat.

Well, Heinrich is an adorable gem of a dog and I hope he enjoys his Snausages very much.

That's a lot of treats. This dog doesn't know which one to grab first! Vieler posts his pics on his Instagram account, which is very popular (obviously), with more than 130,000 followers.

My favorite pics are the ones of dogs with lots of extra skin because they look totally crazy! Crazy for those treats

It really seems like this dog is tracking the treat with great precision, but if you scroll through the photos... Well, they tell a different story.

Eiki goes for the treat with his classic side swipe bite. An interesting tactic. I wonder if it paid off for him. There are so many more dogs to see!

Look at this beautiful, symmetrical dog! This is like the Brad Pitt of dogs. So gorgeous, so classically handsome.

This dog's name is Napoleon and I can't help but think it's maybe the most appropriate dog name I've ever heard of. I can picture this dog in that big hat Napoleon wears.

You can tell this pup is very serious about catching this treat. She is not wasting any time. She wants that little nugget of goodness.

Have you ever seen such a smile on a dog about to snatch up a little treat? Lilo is so excited. She can't believe her luck!

This is like the cutest, cuddliest hairy monster in the world, though. Just wait 'til there are two pups in one shot!

Nova is normally a very calm, collected, and elegant dog, but if you throw a treat in front of her face, she's going to go for it.

On the other hand, Fiete is definitely not the epitome of grace under pressure. He doesn't mind looking super silly.

Zeus may be named after an almighty Greek god, but he has no power over what his face does when he's presented with a treat.

OK, these aren't actually their names, but they kind of fit, right? I definitely recommend scrolling over to see the "after" shot. It doesn't disappoint.

Rocky cannot believe his luck. Three treats at a time! No other dog has ever had such good fortune! The next picture is truly legendary.

This dog simply cannot believe what is in his mouth right now. He knew he was coming in for a photo shoot. He didn't know he'd end up with a treat.

Probably an unintended consequence of these pictures is that you get a really good look at the inside of each dog's mouth. This guy has quite the set of chompers.

There are so many treats here that Arielle is struggling to fit them all in her mouth. Something tells me she'll manage, though.

They may be best friends at all other times, but when it comes to treats, it's a dog-eat-dog world out there.

Would you take a look at the coating of drool that's all over Leni's mouth? Girl needs to rein it in. The next one is a different sort of treat...

When the photographer said, "Say cheese!" Ben didn't think he would actually get tossed a piece of cheese! This is the best day ever!

Amy is a puppy, but she already has the reflexes of a much older and wiser dog. I want to pet Amy.

This cutie pie looks a little scared of the treat. After all, it was just thrown in his face. Some warning would have been nice.

This is a whole series of doubles and triples in pictures, and they're all precious. Make sure you scroll through!

Tyler seems a little sad and confused about this whole thing. Maybe he doesn't want his picture taken. I don't like to be filmed while I eat either. The next five are truly all-stars.

This may be a little dog, but he's got big hair and even bigger personality. He was born to be a star.

This is the most excited/happy/satisfied look I've ever seen on a dog's face. What a good photo.

Ben and Louis both seem a little overwhelmed at the whole situation, but that makes these photos even cuter.

Spotted: A spotted dog gone absolutely insane with excitement at being thrown a treat. Way too cute for his own good.

Oskar the corgi, everybody. I think the ears say it all. Share this with someone to put a smile on their face!