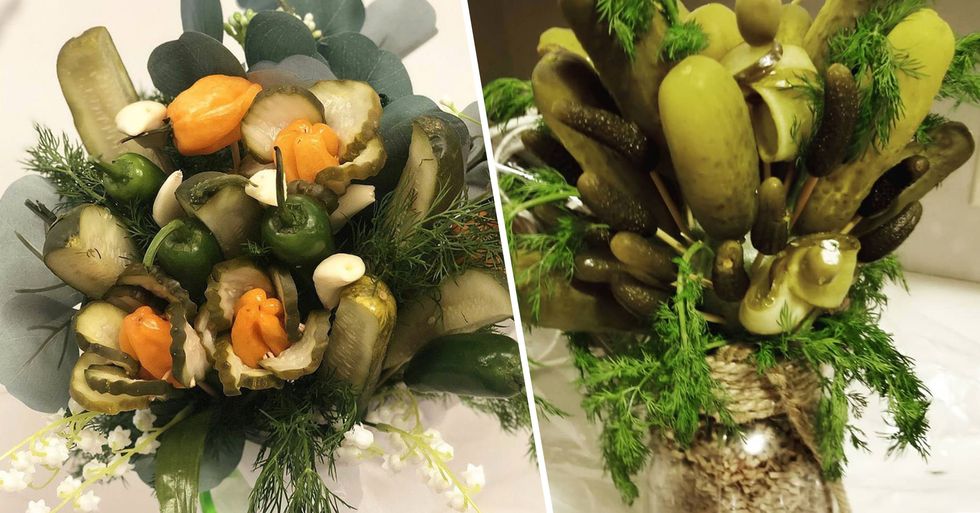 Didn't you know, roses and chocolates are so last Valentine's day!

People have started a strange trend for Valentine's day, and everyone's going crazy for it.

Valentine's day has seen many people around the world celebrate the day in wacky and wonderful ways, to show the people they love that they care. Here are just 10 of the best.

Who's to say guys can't enjoy a bouquet of roses or a nice box of chocolates. However, if your guy loves his meat, Manly Man Company offers half-pound rose and daisy bouquets made of beef jerky.

For the Veggie in your life.

If your Valentine isn't a meat fan and the nuggets are a no go, Grillo's Pickles has you covered. Because let's face it, who doesn't like pickles.

These have revolutionized the V-day bouquet.

The Boston based brand, Grillo's Pickles has created a revolutionary bouquet far more superior to the regular rose.

“Not only is a pickle bouquet more beautiful than a dozen red roses, and healthier than a standard box of chocolates, it’s also far more creative." Said Travis Grillo, the creator of the pickle bouquet.

Edible bouquets seem to be increasing in popularity, and clearly it's not just chicken nuggets or pickles. Basically, any food you can think of can be bouquet-ized. Even pizza is making its way into the bouquet. However, if you aren't ready to get weird with it, people are opting for a more traditional take on this new trend, filling a bouquet with a variety of chocolates, including the well-loved Reece's peanut butter cups.

How do you make the pickle bouquets?

If you're looking for a DIY gift idea, Grillo's Pickles has outlined a step by step plan of what you'll need to make the delicious gift for your valentine.

All you will need is: Pickles A flower vase (foam and tissue paper optional) Savory garnish, such as cherry tomatoes, mini bell peppers, olives etc. Extra dill or greenery, for the final finish. I'd maybe get some soft mints on the side, just in case.