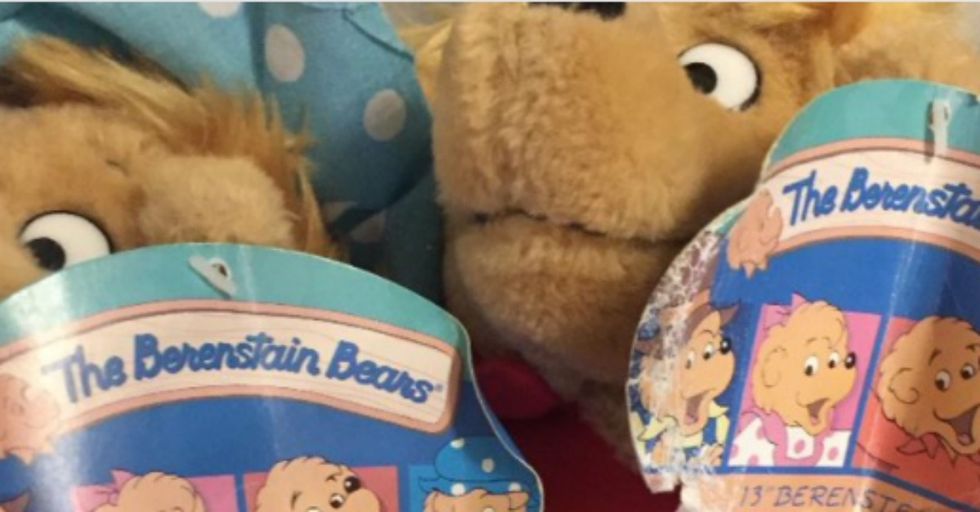 Is it ‘Berenstain’ or ‘Berenstein’ Bears? This Photo Will Make You Question Everything

Do you remember the Berenstain Bears? But do you really?

You may be aware that the Internet exploded a little while ago when someone realized that the Berenstain Bears, beloved ursine family of children's books and television, is — and has always been — actually spelled BerenSTAIN and not BerenSTEIN.

The revelation sparked actual chaos amongst many full-grown adults who remember it as Berenstein. We've all worked very hard to accept that our collective memory has been totally false all these years. But now, there's a new development in the -ain/-ein dilemma, and it only confuses things further.

There's a name for the phenomenon of collective false memories: the Mandela Effect.

The term was coined in 2010 by blogger Fiona Broome to describe a specific false memory she came across at the Dragon Con convention. Apparently, many people believed the former South African President Nelson Mandela died in prison in the 1980s. Meanwhile, the man actually lived until the ripe old age of 95. He died in 2013 at his home, surrounded by family.

That's not the only false memory that many people share.

Do you remember a '90s movie called Shazaam, starring Sinbad as a genie? Many have clear, distinct memories of this movie, but it didn't exist.

Sinbad himself tried to help put the rumors to rest.

There is a movie from 1996 starring Shaquille O'Neal as a genie. That's called Kazaam, and it's real. Sinbad also hosted an afternoon of Sinbad movies on TNT, during which he was dressed as a genie, so that may be where the conflation happened. But, it's still super strange that so many people have the same completely untrue memories.

It doesn't end there, though. Remember in The Empire Strikes Back when Darth Vader says, "Luke, I am your father"?

No, you don't because that's not the line. The real line is, "No, I am your father," but so many have misquoted the wrong version of it that it has become a trope all its own.

But that's not the only misquoted line that's made its way into the lexicon.

It's been incredibly difficult for many to come to terms with the fact that the Berenstain Bears is spelled with -ain.

People were so shaken by the truth that the -ain/-ein controversy sparked a theory of parallel universes.

The think pieces abounded. People's -ein memories were so strong that they convinced themselves the Berenstein Bears actually exist, just in an alternate universe. But it's not true. It's always been -ain. Or has it?

"My best friend found this tag when they were cleaning out her grandma's house on some old BERENSTEIN Bears," the Reddit post from September 16, 2017 reads.

Look closer. Yes, the top bold label on these vintage Berensta(e)in Bear stuffed animals says, "Berenstain." But on the very same label below, it's spelled "Berenstein." What.

That's not the only piece of evidence.

On August 5, 2016, this photo of an old Berensta(e)in Bears VHS was posted on Reddit. It clearly reads "Berenstein."

What is happening here?

Is your head spinning? Are you questioning your own reality? Yeah, us too. Some believe these are fake — that the different spellings must be photoshopped. But others think they now have proof that they've been right this whole time. A bunch of other people have fully given themselves over to the idea of parallel universes. Let's see how they're doing...

An alternate universe would be a great place to travel to these days...

But with the recent controversy now between -ain and -ein, which is the real universe and which is the alternate? Does it matter? Who are we? Why are we here?

The Berenstein universe is a perfect excuse for your own failings in observation.

For years, this woman thought her favorite gas station was a Chevron. It's actually a Shell. Those are two wildly different color schemes to mess up for so long — Chevron is blue and red, and Shell is bright yellow and red — so maybe there's actually something to this theory of parallel universes.

This about sums it up.

Whatever universe we're living in, whether it's real or not real, Berenstain or Berenstein, could use a lift. If we could get a glimpse of whatever that alternate universe is, we're sure it's Wizard of Oz-Technicolor-colored, and full of rainbows and butterflies and female presidents. What a nice thought.