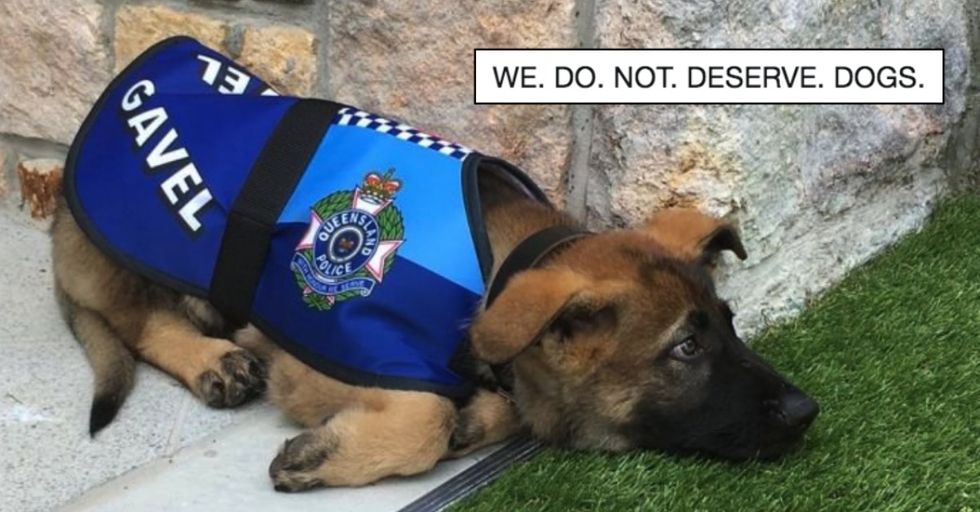 One little dog was training diligently to join the police force in Queensland, Australia. Unfortunately, he didn't make the cut and his station had to let him go. It was perhaps the only time that a story about getting fired makes people everywhere swoon.

He was training to be a police dog at an Australian police station. The German Shepard puppy trained with the police force for so long that he had time to outgrow four different training vests! When he began his training, a police report said, "Gavel comes from a long line of pedigree ... if the family bloodline is anything to go by, in 16 months Gavel will be tracking and catching criminals as a proud member of the Queensland Dog Squad!"

Unfortunately, the little guy was eventually let go from the force.

Gavel was too friendly. Policemen would try to get him to help them catch criminals by tackling them, but Gavel was too interested in making friends and saying hello to strangers.

This doggo reminds us of the warmhearted and ridiculous Andy Dwyer from "Parks and Recreation," who [SPOILER WARNING] also couldn't make the police force because he was too gosh darn amiable.

Side note: if you haven't gotten to that part in "Parks and Rec" yet, keep watching, because it's a heckin' delight. The Queensland police said that Gavel, "did not display the necessary aptitude for a life on the front line."

Thankfully, Gavel had a second chance.

The Queensland governor had fostered him at his official residence since he was six months old. He gave the pup a new job that was more suited to his talents.

The office of the governor released a statement detailing the pup's new gig.

Their official statement said, "He has outgrown four ceremonial coats, undergone a career change (his official title is now Gavel VRD, 'Vice-Regal Dog'), and brought untold joy to the lives of the governor, Mrs. de Jersey, Government House staff, and the thousands of Queenslanders who have since visited the estate." Soon after the promotion, they posted updates on Gavel's progress.

He's enjoying his new role and is expected to stay in it for some time.

He greets visitors at the Queensland Government House and is even part of official government ceremonies. His official title is Vice-Regal dog. An official spokesperson for the office of the governor said, "Gavel on occasions sits in on briefings with the Governor." They continued, "Gavel has also demonstrated his capacity to uphold the ceremonial importance of his role at State of Origin time." We love how official all their statements sound! Gavel sure has become an important part of their office. Governor de Jersey said, "We hope Gavel's with us for a long, long time into the future."

Gavel isn't the only dog with a job!

This is Piper, a wildlife control canine at Cherry Capital Airport in Traverse City, Mich. His owner posted this caption on Instagram: "Piper's open mind is perhaps his greatest strength. From starting training at an older age to working in a weird environment and everything between, dude is open to most all challenges (except thunder, no... just no ?)" Piper is reacting to that helicopter like a champ! We would be freaking out if we were standing where he is.

She's a German shepard–great Pyrenees mix who's training to be a medical alert dog! Luna goes everywhere with her mom and is steadily learning all the skills she needs to know to get certified. She's doing such a great job. Look how excited she is to help her owner pick things up!

Honor is a 3-year-old service dog who helps retired marines return to civilian life. She is part of the "freedom dogs" program, which matches service dogs with wounded military members. The dogs give the recovering veterans mental and physical support. We love these pups and are so thankful that they help their owners live happy lives.