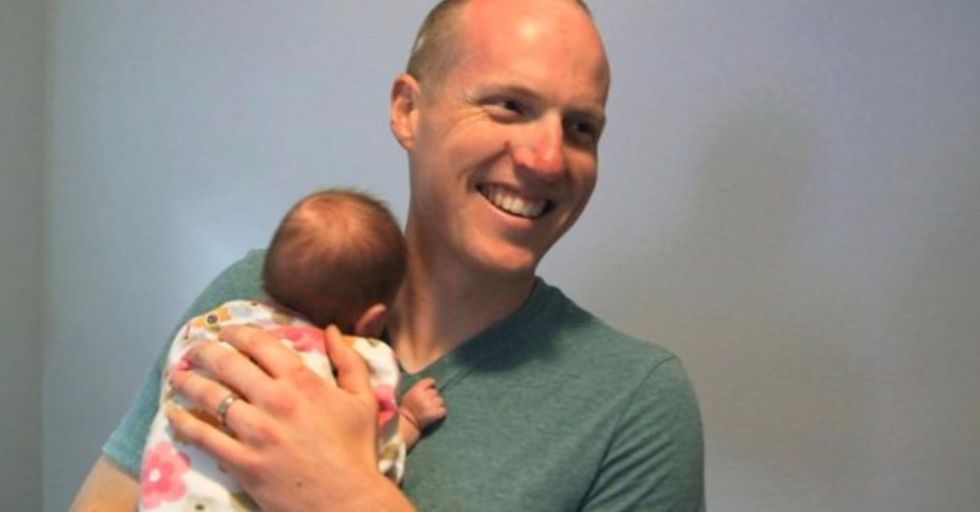 This Police Officer Found a Pregnant Woman Shooting Heroin but Rather Than Arresting Her, He Did This

Cops need to be ready for anything when responding to a call. What seems like a routine traffic stop, domestic dispute, or disagreement can sometimes turn in an instant in surprising and unexpected ways. Officer Ryan Holets still never expected a call about a possible theft at a convenience store to end minutes later with his offering to adopt a baby. But that's precisely what happened.

Albuquerque police officer Ryan Holets responded to a routine patrol call on September 23 that would forever change his life, and the lives of many others.

He noticed a couple in the back of a convenience store who looked like they were about to use heroin. Holets switched on his body cam and approached the couple. Things were as routine as can be until the officer noticed that the woman was pregnant.

On the body cam video, Crystal Champ, 35, can be seen breaking into tears when Holets notices she's pregnant. He says, "Why do you have to be doing that stuff? It's going to ruin your baby. You're going to kill your baby."

This first encounter, captured on video, took approximately 11 minutes. In their conversation, Champ explained that she hopes someone will adopt her baby. She says that when she said this Holets entire demeanor changed. "He became a human being instead of a police officer," she said. Holets showed Champ a photo of his wife and four children, and then... he offered to adopt Champ's unborn baby.

Holets offered to adopt a baby of a mother he met 11 minutes earlier. He just needed to tell his wife first.

The officer left the couple at the convenience store and drove across town to where his wife was attending a party. He explained that he just offered to adopt a heroin addict's baby, and she instantly agreed. And as quickly as that, the lives of Officer Holets and his wife, their four children, Champ and her partner, and of course the unborn baby, all were forever changed.

Three weeks later, Champ gave birth. True to his word, Holets and his wife adopted the baby girl and aptly named her Hope.

Holets explained, "I was led by God to take the chance. God brought us all together. I really don't have any other way to explain it." His wife, Rebecca agrees. "We feel God has called us to do that. It's been on our hearts for a while," she said.

"I've gotten tired of seeing so many situations where I want to help but can't, and in that moment, I realized that I had a chance to help," Holets told CNN.

Baby Hope was born addicted to heroin. She underwent weeks of withdrawal and medical treatment. She is now gaining weight and doing well. Holets said, "I am so thankful, and blessed, and humbled that we're allowed to have Hope in our family."

Holets maintains that it was not a coincidence that he found Champ behind that convenience store that day. He says, "It's no coincidence; it's like providence."

This incredible story has been shared across social media channels all over the globe. Generally, people are hailing Holets and his wife as heroes for so quickly stepping forward and offering to adopt this baby.

Of course, social media wouldn't be what it is if there weren't also people criticizing the Holets, Champ, and the whole situation.

Some are saying that if Holets wanted to help, he should have offered to help Champ get clean so she could care for her own baby. Others are criticizing CNN's handling of Champ, painting her as a victim rather than a criminal. But most people grasp the complexity of the situation that Holets discovered behind the convenience store. His incredibly generous offer to adopt the baby probably saved baby Hope's life, possibly saved Champ's life, and will have unfathomable effects as time wears on.

As wonderful as this story is, it feels unfinished.

We don't yet know what becomes of Champ and her partner. She was feeling entirely without hope before Holets came into her life. Maybe this event serves as a turning point for her. We also don't know how baby Hope will fare. Babies born addicted to opioids can have lifelong struggles. Holets seems aware of what he and his family are facing. He says, "We'll be there for her. In whatever struggles that she has, we'll be there."

CNN journalist Ed Lavandera interviewed Holets and Champ to get the full story from all sides.

Champ's interview is difficult to watch. This bright young woman is trapped in the grips of an addiction which seems to overpower her entirely. She's homeless, and has been for two years. She explains that she's tried to get clean multiple times, after half a lifetime of addiction to heroin and crystal meth, but she's failed. "I did give up. I just decided this was going to be my life. It just keeps coming back and ruining my life."

This beautiful story is really just a beginning for all the people involved.

Baby Hope's life is on a completely different path than it would have been if not for that fateful meeting between her birth mother and adoptive father. Hopefully Champ will find some way to redirect her life as well. As difficult as battling addiction is, this story shows that miracles can happen.