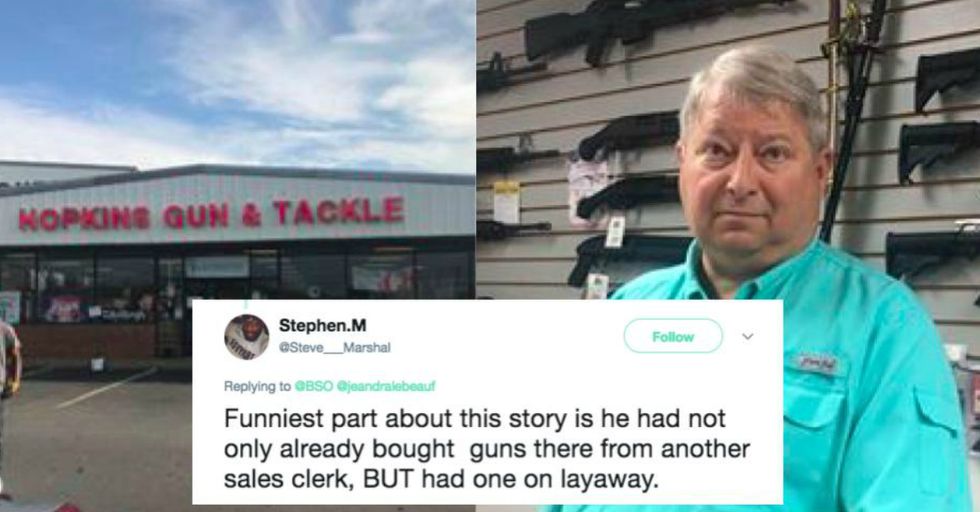 A gun store owner was caught on camera refusing to sell guns to a black man because he suspected he might sell them to gang members. Chris King Mason went with a friend to Hopkins Gun and Tackle on Mechanicsville Turnpike in Richmond, Va to purchase firearms. This wasn't the first time he'd gone to the store – in fact, he'd already bought guns from Hopkins and also had a firearm on layaway. Nevertheless, the owner, Vance Hopkins, refused to sell him a gun.

Mason caught the moment on tape and posted it to Facebook. Activist Shaun King later posted the video on his Twitter where it gained traction.

When Mason asked Hopkins why he wasn't selling him a firearm, Hopkins replied, "I’m not going to sell you a gun. I don’t have to have a reason not to sell you one." Mason pressed further, asking if the refusal was based on racial prejudice, to which Hopkins replied, "I’m not gonna answer that, that’s crazy. We have to follow all federal guidelines and we’re not gonna sell you a gun. And if you don’t go ahead and leave the premises I’m gonna call the police."

Hopkins then proceeds to call the police.

This is extremely troubling, considering black men have literally been killed for less. What's more, Mason is doing nothing wrong. He's a registered gun owner who had already previously brought guns from the store.

In fact, Mason is a rarity. Gun ownership is largely the purview of white males.

As the Pew Research Center notes, "Gun ownership is more common among men than women, and white men are particularly likely to be gun owners." But then, there is a marked discrimination when it comes to gun ownership. Black men who buy guns are seen as gangsters and thugs and duly policed, while white men are given the benefit of the doubt.

He wrote, "URGENT!! URGENT!! URGENT!! Do not I repeat do not purchase anything from Hopkins Gun and Tackle on Mechanicsville Turnpike in Richmond,Va. 2 seconds into me walking inside, the owner of this store refused to sell me any firearms. His reason was simply and I quote 'I will not sell you or your friend any firearms because my reason to believe is that you will sell them to someone else.'"
In 2017, we really need to do better.