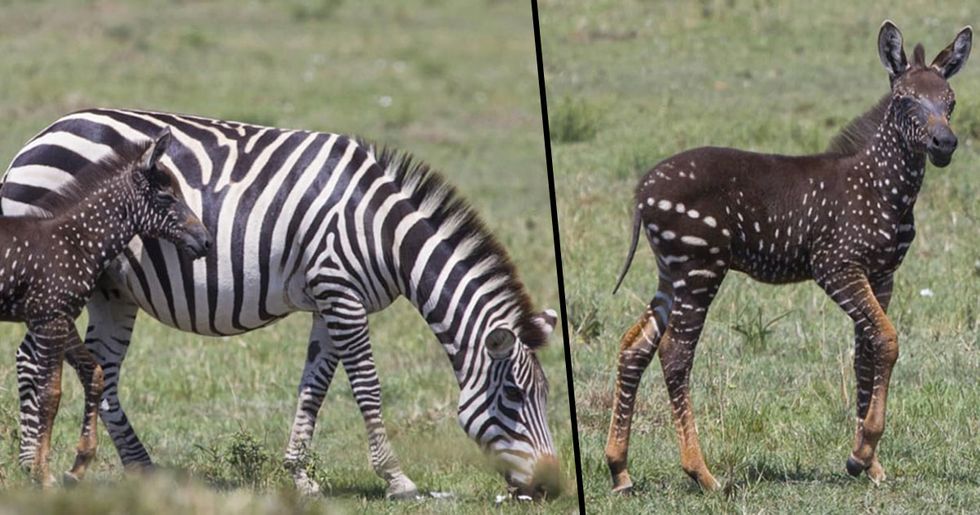 This adorable story comes from Kenya.

Whilst doing his rounds, the animal lover spotted this amazing zebra which defies all logic. Some things are just the way they are, right? Green means go, red means stop, lions roar, babies cry, and zebras have stripes.

Well, sir, I think it's about time we did a rethink on everything we believe.

Is the world actually flat? Did man walk on the moon? Was I adopted?

I don't know what to believe anymore.

Keep scrolling to your world shook...

There was no stranger animal incarnation than the one that we were subject to in 2005...

I can't be the only one that was totally weirded out by David Schwimmer voicing the nervous giraffe in Madagascar. I know it was only a cartoon giraffe, but still... no, thank you!

The new Lion King movie has changed everything.

I mean, can we believe anything we see after witnessing the impressing graphics of the latest Lion King movie? Some of those animals looked more real than the animals I've seen in the zoo!

Abdelrahman Hassanein spends a lot of his time in amongst the wild animals, what with working at the safari. This enables him to capture some truly breathtaking shots of the animals he encounters.

I particularly like this one of an elephant's skin. It really takes you up close (I mean, literally) with the wild elephant and demonstrates the mammal's delicate intricacies.

Seeing a real one like this makes me realize how much scarier they are in real life and there's me cowering in the cinema when the cartoon versions came on during Lion King.

Am I the only one?

Surely there's plenty of people that just don't have any time for these nasty-looking creatures. I swear, you could tell me they'd found a hyena with a rainbow stripe down it's back and I'd still be terrified of it.

There's something about deers too.

I know most people finding deers to be kind of cute, I mean.. Bambi, right? But, personally, I'm definitely more of a Dumbo girl. I think it's the skinny frames and beady eyes... They remind me of this nasty kindergarten teacher I once had.

For anyone who has watched (or read) The Lion, The Witch And The Wardrobe, you'll know exactly who Mr. Tumnus is. James McAvoy played the goat man-creature in the 2005 version of the classic story. Remembering the movie has got me thinking that, if this zebra had spots instead of stripes, could it be an animal cross over?

The Talek Bush Camp Safari has plenty of exotic animals.

I mean, you're unlikely to discover a faun like Mr. Tumnus, but it's the only place you can find the spotted zebra. They've got warthogs, too! If, like me, you've never seen one of them in real life...

The Warthog in The Lion King is just as believable as the real thing!

Makes you do a double-take, doesn't it? That being said, it's quite clear that the pictures of this polka dot Zebra were not created by Disney.

The pictures taken by Hassanein have been shared across the world.

The humble wildlife photographer really has captured something special.

Hassanein has not specified exactly where he spotted the Zebra...

But we know that it was somewhere within the wild camp of the Talek bush on the Masai Mara National Reserve.

Spotted with its mother.

The young spotty Zebra seemed to be in bright spirits when it was snapped by Hassanein. According to the avid wildlife photographer, the camp has collectively started calling the rare animal "Tira."

Hassanein spotted the unusual Zebra on his morning rounds.

What an exciting way to start your morning! A cup of joe, a stroll around the park, and, suddenly, you encounter one of the rarest zebras known to man.

Let's hope it's not all some elaborate hoax, eh!

I'm confident it's not... but I guess, to be absolutely sure, I'll have to get myself down to the Masai Mara National Reserve, check it out for my self - see the spotted zebra with my own two eyes. This isn't the only little cutie that the internet's fallen in love with recently, keep scrolling to check out the breed of cat that everyone's fallen in love with.