So much so, that some of this earlier original work has been commissioned. | 22 Words 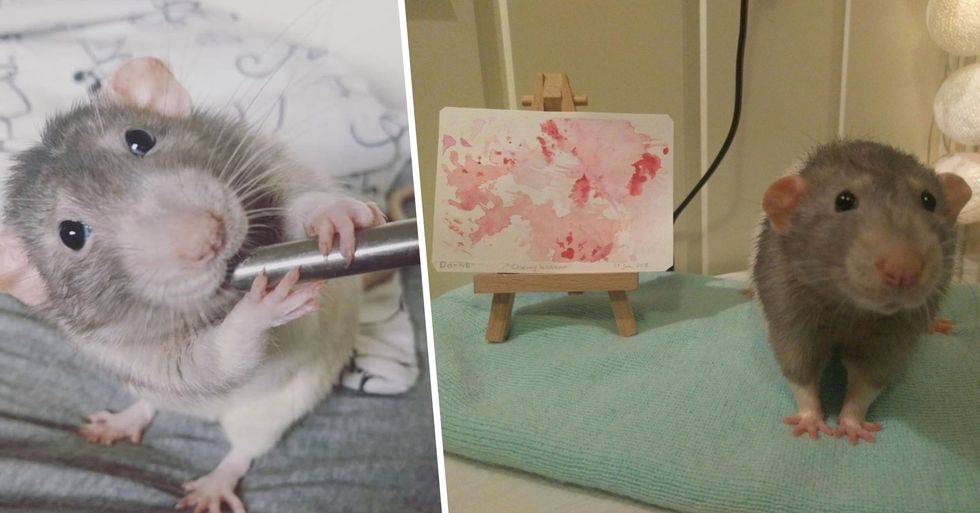 For many of us who have pets, we'll train them to some extent. Whether it's to sit, lie down, roll over, or something a bit more creative, we often teach our furry friend certain commands.

But one pet-owner has taken this to new extremes - teaching her pet rat to paint with its feet. Yep, really. Just let that sink in.

Now, let's be honest, rats don't exactly have a fantastic reputation, and many wouldn't even consider having one in their home, but this little Picasso in the making is pretty cute, and the tiny works of art aren't too shabby either.

In fact, some of his works of art are proving so popular that they have actually been commissioned.

Keep scrolling to see the tiny artist and the heartbreaking twist to this wholesome story.

Many people think they're "dirty" rodents, with some people even having a genuine phobia of them.

They're branded as disease-ridden pests.

Just a glimpse of one is enough to have you on the phone to pest control.

Many wouldn't dream of having one in their house.

The idea of having a rat as a pet is out of the question for the majority of people.

But there are people out there who've had their hearts stolen by the creatures.

Several animal fanatics can see the cute side of the rodents.

And we have to admit, the artist rat we're about to show you is pretty adorable...

Whether you want to admit it or not, there is something cute about their little faces.

Meet Darius, the rat who paints with his feet.

His art-student owner, Amalie Markota Andersen, from Norway, adopted him in 2017 and managed to train him to create works of art using his feet.

When she first adopted him, he was "timid and shy."

While Amalie described the little rat as being "timid and shy" at first, she says he was cuddly "like a little baby."

Amalie regularly documented his handiwork on Tumblr, revealing that his first-ever painting was created in January 2018.

Each piece of art takes Darius around ten minutes to complete.

"I got a non-toxic watercolor set, dipped his little hands and feet in it and just let him walk back and forth on the paper until it started to look like something," Amalie explained.

So much so, that some of this earlier original work has been commissioned.

Darius' newfound fame resulted in around 3 to 4 of his originals getting commissioned. It's certainly a unique selling point...we don't anticipate many people would have a painting created by a rat.

Darius reaped the benefits of his hard-earned cash.

Amalie said that she used the money to buy Darius a harness so that he could "explore the outdoors safely."

But, sadly, there won't be any more paintings from the little rat.

Heartbreakingly, Darius passed away earlier this year. Amalie, who also has 2 other pet rats named Gucci and Mango, said their time together was extremely "impactful" for her. "I had him in a weird time of my life where I was trying to figure out who I was as a person, and also where I should be going in life. He was my light in the darkness, if you will," she told Insider.

But she admits that she regrets selling his original works.

"I do regret selling the original a little bit," she confessed. "But it also makes me very happy thinking that his works are out there somewhere, hopefully still intact and well!"

"I'll be forever infinitely thankful for him."

Amalie clearly misses her furry friend, explaining that she'll always be thankful for him. "And I'll be forever infinitely thankful for him, even if he never knew what kind of impact he had. Not only on me but the thousands of people who fell in love with him and his little painting." Want to read more wholesome pet-related content? Keep scrolling to learn about a dedicated dog owner who embarked on a full-time fifty-seven-day search for her missing dog, Katie. Don't worry, this one does have a happy ending...