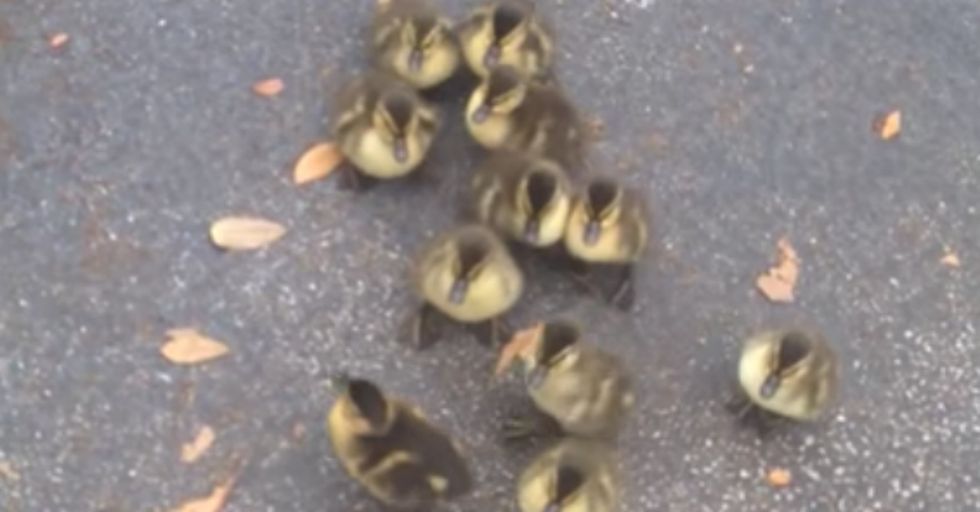 Part of the magic of the internet is that it gives us the ability to capture all the fun things that happen in daily life and share them with the rest of the world. If a baby sneezes adorably, you can show someone. A kid says something hilarious? Also sharable.

And when it comes to cute animal videos, if the footage is endearing enough, it can go viral in a second.

Falling firmly into that category is a clip a man posted of his run-in with mother nature. People are going crazy over it because cuteness, plus baby ducks, is a recipe for internet gold.

Most of the time, we can barely keep up with life as it speeds by.

Thank goodness for phones with cameras, laptops with cameras, and every other gadget that helps us capture the day-to-day moments we'd otherwise never remember. Because, try as we might, recalling all the important things that happen to us is an impossible feat. Yet even as life moves at the speed of light, technology gives a fighting chance at preserving it.

Some of us are just scrambling to keep track of our kids.

When parenthood happens, life tends to feel like it's moving like a runaway freight train. Trying to feed, clothe, and remember to grab the right-size diapers consumes most of our brain space. The other part is occupied by desperately attempting to document the cute things they do. Because there's a ton of cuteness, and we're happy to share it with family (and Facebook).

Others have a full-time job keeping up with cute pet happenings.

For another swath of the population, pets are the furry dependents that keep them on their toes and reaching for their iPhones. From obedience training to attempting to keep them out of the toilet, social media is full of animal lovers attempting to keep up with adorable moments of the four-legged variety.

And even if people don't have kids or pets, they may just enjoy all the bizarre moments shared by those around them.

And that's not to mention those of us who are simply trying to capture all the strange yet endearing things grown-up people in our lives are constantly doing. Things that could happen anywhere — family reunions, company picnics, college campuses — you name it. Then again, college moments may tend to get filed under "dangerous and questionable" rather than  "cute." But still.

In a category all their own are shockingly cute wild animal moments.

Even when we're not trying to keep track of life's particular moments, they seem to find us anyway. Mother nature has a way of providing our cameras and social media with some of the most amazing and adorable furry fodder. Whether it's a yawning sloth or a brand-new dear learning how to walk, these times to stop and say "aww" are, thankfully, more than abundant.

Baby ducks doing things out of step with the ordinary certainly qualifies as nature being weird and cute.

It was just a regular day until a man, who goes by TheRealD25, accidentally got these baby ducks' attention. We dare you to watch the video and not be smitten by the absolute cuteness of the gaggle of yellow fluff following the poster around with misplaced hope. It was pretty much unfathomable for him not to stop, record, and share with the internet.

Ducks on parade are irresistible, especially when they're tiny, and they think they're following their dad.

"Imprinting" is the act of animal coming to recognize another animal or person as their parent, which is certainly what happened here. Unfortunately, we don't have a lot of backstory pointing to where the mother of these endearing ducklings went, but that didn't stop them from finding a surrogate parent to follow.

Sometimes, parenthood finds you, even if you're not quite ready.

In the video, the poster remarks, "Aww, man. I'm not ready for kids!" This struck many people as pretty hilarious, seeing as how no one's ever really ready to be a parent. Admittedly, when he pulled over, this man had no idea he was about to become a father figure, but no time like the present, right? One follower put it best with this comment: "Too late! Welcome to motherhood!"

After the initial excitement wore off, people were concerned about the ducks' future.

While the man's video and his noble deed of helping the lost ducks cross the road is too cute for words, viewer's thoughts soon turned to what would happen to all the little, motherless ducklings. One YouTube commenter put many other followers thoughts into words. "Hopefully you did take them home with you, it’s extremely dangerous for them outside anywhere at that age, they have over 90% of chances to die." Yikes.

Don't worry! This story has a happy ending.

Followers of the video didn't have to wait long to find out the status of their beloved yellow fluff-balls. Being an upstanding guy, TheRealD25 made sure that everyone knew his "kids" had been adopted by Disney's Animal Kingdom, his employer at the time. How's that for the happiest place on earth to end up?

We wish nothing but the best for these ducks and their "dad."

Although TheRealD25's original video is over two years old, it's recently took on a new life after it was uploaded to Instagram. As of now, tens of thousands of people have followed the little ducks' journey and have been relieved at the happy outcome. We count ourselves among them and hope nothing but the best for this upstanding guy — and the little ducks who made him go viral.