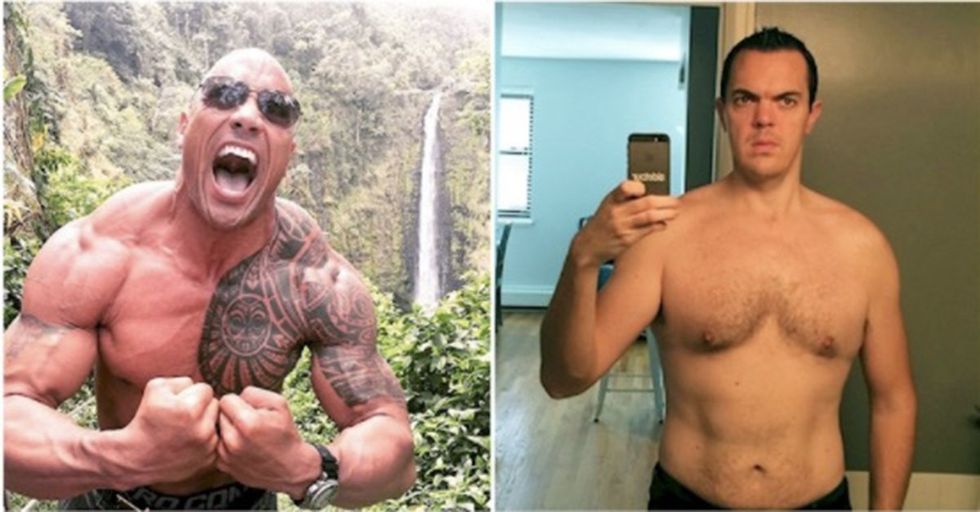 As most wrestling and movie fans know, there are very few people who embody commitment to physical training like The Rock does.

Earlier in his life, it was for football and wrestling. These days, it's for movie roles and his own well-being. Training is a huge part of his life, but what happens when a "regular" person takes on the movie star's training regimen? Will they see huge gains in muscle mass? A boost in metabolism? Will they collapse from eating too much?

This man, Mark Webster, was going to find out.

For thirty days, he planned to eat, sleep, and train like The Rock. He kept a blog to document the changes to his 6'3", 251-pound body at the outset of the project.

The meals may actually have been more work than the training. Not only did he need to eat them, but he had to prepare and pay for them as well!

Here's a look at Mark's fridge during the 30 days. There's not much room for variety on such a strict diet.

Here's the crazy breakdown of what The Rock's diet looks like.

Oh, and let's not forget about the training.

There would certainly be some sort of payoff at the end of the month, but would it be worth the intense and monotonous lifestyle it takes to get there?

The Rock caught wind of the project after Mark did an AMA on Reddit. (Link below)

He might not look like Hercules, but it's clear that the diet and exercise made a pretty profound difference, even over just 30 days.

I don't know if this lifestyle is sustainable for a "regular" person, but if you or anyone else can take elements from it, you'll certainly find yourself fitter than you were before.