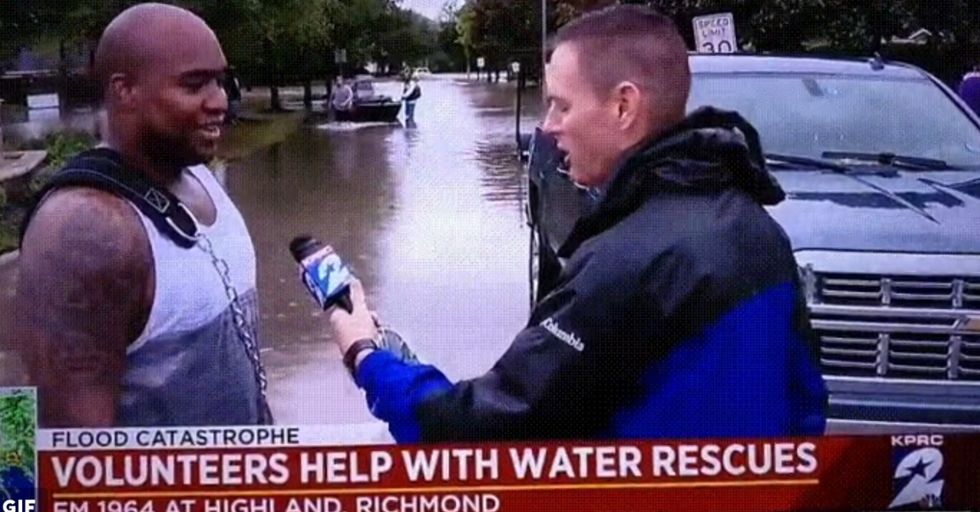 Finally, after years of having to watch politicians and celebrities give each other truly awful, uncomfortable handshakes, we can breathe a collective sigh of relief. This week, a reporter delivering news on Hurricane Harvey and a helpful civilian shared an on-air handshake that made us seriously proud.

Social interactions can be hard, and for those who are painfully awkward, meeting someone new can often turn into a nerve-wracking situation. Should I hug them? What do I do if they try to fist bump me? Should I fist bump them first? There are just so many things that can go wrong, and it's hard to shake a bad first impression.

Add the pressure of being filmed to an awkward introduction and the results are almost always terrible. And yes, we do say almost, because we are about to show you the first time in history a non-horrible handshake has been captured on film for your viewing pleasure.

Let's start off by taking a walk down memory lane with some of the worst handshakes of all time.

We all remember this beauty between Kanye West and John Mayer, right? We're pretty sure John's career has still not recovered from this. We're still cringing.

But also far from the worst. They get flat-out abysmal. Making matters worse, they're all caught on camera.

Here's a pretty bad one from everyone's favorite ray of sunshine, Mel Gibson.

I don't think Michael Strahan did anything to your hand worthy of your disgust, Mel. Don't be rude.

To be fair, everyone knows that you just don't high five Randy Jackson.

He literally fist bumped every American Idol contestant so you know he hates touching sweaty palms with people.

It can't be coached. It's just something that you have to know how to do. You'll see how tricky it can be in the next cringe-y instance.

Whenever you're ever having a bad day, just remind yourself that at least you've never tried to high five a blind guy. Unless you happen to be Ryan Seacrest, of course.

That's a reluctant five, blind or not.

Sometimes, you have to be reminded to "Just Do It." Ask Shia if there's any confusion.

Even world leaders suffer from an awkward handshake every once and a while.

Not even the dreamy Justin Trudeau can pull off this rat's nest of awkwardly reaching arms. Just do one at a time, guys. But it wasn't even close to as cringey as this next one...

Don't prepare for a third when your hands are clearly full with just two people in the mix. It will get...awkward.

This one is almost too much to handle...

...yet you can't look away. Yet you must keep going, because they only get worse...until they get better.

These were rough to watch, we get it.

But the next video will completely restore your faith in humanity. Well, in regards to handshakes, anyway.

A user named Rich posted this breathtaking interaction on Twitter and people across the Internet collectively lost their minds.

The effortlessness, the confidence... It really is a thing of beauty.

Rich deserves some sort of award for his prowess.

Hundreds of Twitter users commented on the awe-inspiring clip.

If only we could all be as graceful and cool as that reporter. But it turns out there was another incredibly on-screen handshake we missed. A handshake from someone you might not associate with the words "cool" or "smooth"...

In the midst of the 1.3K comments, one user posted this mind-blowing video of an ultra-suave Bernie Sanders at a rally during the 2016 election.

Nice, Bernie! Maybe there is hope for the horrendously awkward among us yet.

Are you feeling it? The crowd certainly was.

How many voters do you think that swung? I would guess hundreds of thousands.

It could have been far, far worse.

Sometimes, even good ones are bad, as you'll see here.

You've also got the "wait for it..." move, which could drive a person to insanity.

Will they or won't they? It's like Ross and Rachel, only less compelling and romantic.

That was a harrowing journey. Hopefully, it makes all of us feel a little better about our interactions, both good and bad.

They can't all be winners, as these videos prove. But they can still be pretty sweet, and when that happens, you're on top of the world.