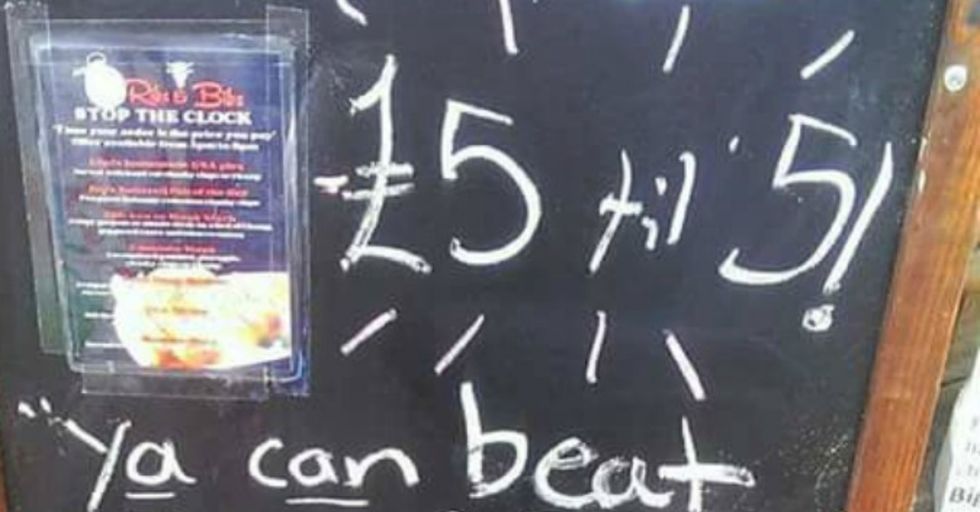 When it comes to making jokes, people have a lot of freedom. There are plenty of hilarious jokes about taboo topics that manage to delicately toe the line between humor and inappropriateness. But there are some things that one should simply never joke about. Unfortunately for the Ribs and Bibs restaurant in Belfast, Northern Ireland, they learned this lesson the hard way.

They can give you a reason for living. Or convince yourself that all you need is a reason to drink. Riesling, preferably.

Some bar signs pull the double duty of reminding you about chemistry class and the existence of alcohol.

Alcohol may not always be the correct solution to your problem, but it is a solution. And you know what they say. If your solution isn't working, get another problem.

Sometimes they even challenge your math skills.

We'll save you the trouble on this one. Just buy two beers.

Did you know that bananas are also slightly radioactive? That's another win for whiskey.

Some bar signs feature stunning artwork and a reminder that we're living in the future...

And then there are bar signs that make you feel as though you're living in the past. That's exactly what the bar sign at Ribs and Bibs did to people who saw it earlier this week. We can't believe someone thought this was a good idea...

The Belfast bar used the following sign to advertise its lunch special:

It says, "Ya can beat the wife, but ya can't beat a 5 pound lunch!" As you can imagine, people were not thrilled by the advertisement.

Obviously, the sign makes light of a very serious issue plaguing people all over the world.

Not to mention the fact that there are multiple better ways to make a similar joke without offending anyone. Off the top of our heads: "You can beat an egg, but you can't beat a 5 pound lunch!" Or how about, "Hey! Our lunch is cheap!" (When you're advertising cheap food, you don't necessarily have to be super clever about it.)

In response to the controversial sign, many people started leaving 1-star reviews for the restaurant.

The owner of the restaurant, Malachy Turner, expressed his frustration with people who used this tactic. He says that the sign was erased within half an hour after there were complaints. He also tried to claim that he was the "victim" of a "horrendous trial by social media." Which is not how you apologize for making people upset.

There's really no way to spin this one.

They claimed the bar sign was nothing a "bit of wit."

Which is also not a good way to apologize. Here's a free tip: If you make a mistake, just apologize for it and try to do better next time. We all mess up now and again. Claiming that someone "can't take a joke" is a terrible idea. That didn't stop people from sharing their own poor reactions, though...

This reviewer claims that the restaurant apologized for the mistake and everyone should move on. Sure... if you can call deriding people for not being able to take a joke an apology. We happen to disagree.

However, we have to admit that using the online reviews as a place to attack or defend the restaurant's actions is probably not the best plan.

After all, these reviews have nothing to do with the food, and it seems like the problematic bar sign was removed relatively quickly.

This guy has the right idea:

New plan. Let's use online reviews as a place to leave actual reviews. And let's not joke about domestic violence. We can all agree on that, right?