This Retriever Gives Hugs to Everyone She Meets | 22 Words 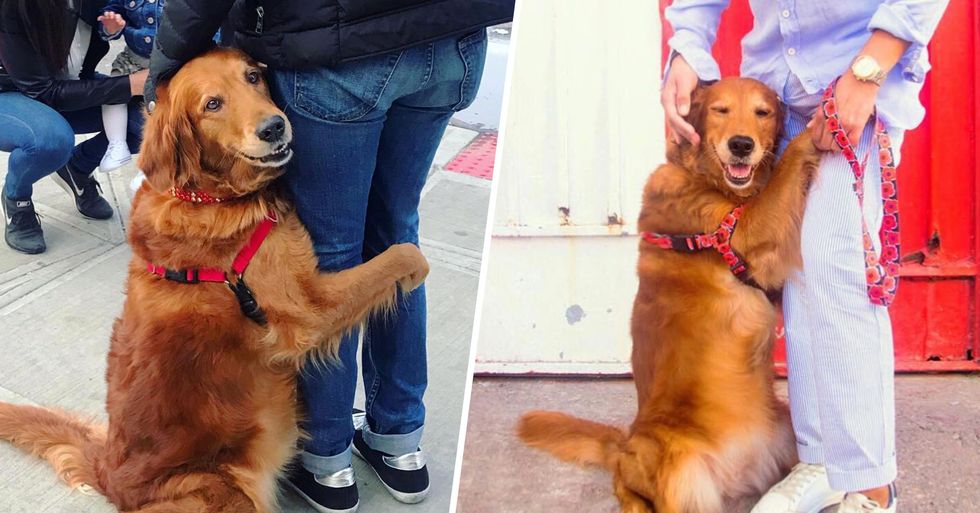 This Retriever Gives Hugs to Everyone She Meets

With the current pandemic everyone's in need of a hug.

And although we currently can't due to social distancing, as soon as this is all over with we know where you can get the best hug from.

Keep reading to meet the retriever who loves to hug people.

Sometimes you just need a hug.

Even if you're not the kind of person who normally likes them.

We know of one kind that we're pretty sure you would.

Because it involves a dog.

In fact, he loves them so much, he hugs everyone that he meets.

Named after the french shoe designer, Louboutina, is a golden retriever.

Louboutina, spends around two hours each day on a walk.

And shes hugs everyone that she meets on them.

Despite the walk being two hours, they don't actually get far.

Cesar Fernandez-Chavez, Louboutina's owner told The Dodo "It's just not a regular walk. Its a walk with hugging. So we don't get to go too far".

Around Valentines Day 2014 Loubie began holding hands with her owner just after he had ended a relationship.

Fernandez-Chavez explained, “She started sitting up and grabbing my hands with both of her paws, and then crossing the other paw over her paw."

“I remember joking with my friends, ‘At least I have someone to hold hands with during Valentine’s.'"

And then a few years later, she began showing her affectionate hugs.

"Instead of asking me to do the holding hands thing, she just sat up, very close to my legs, and she'd wrap her legs around my knees," Fernandez-Chavez said.

Then she just kept doing it. And it didn't take long for her start doing it to other people too.

"It's nice to see people walk away with a smile," Fernandez-Chavez says.

"Especially with everything that is happening now, people say it's so good to see this on the street. She's bringing them joy. It's very rewarding."

It's a good job that her owner isn't the jealous type, as Loubie certainly loves hugging everyone.

Wouldn't you love a hug off Loubie to cheer you up? Keep scrolling the adorable muddy dog who manages to keep his face completely clean!