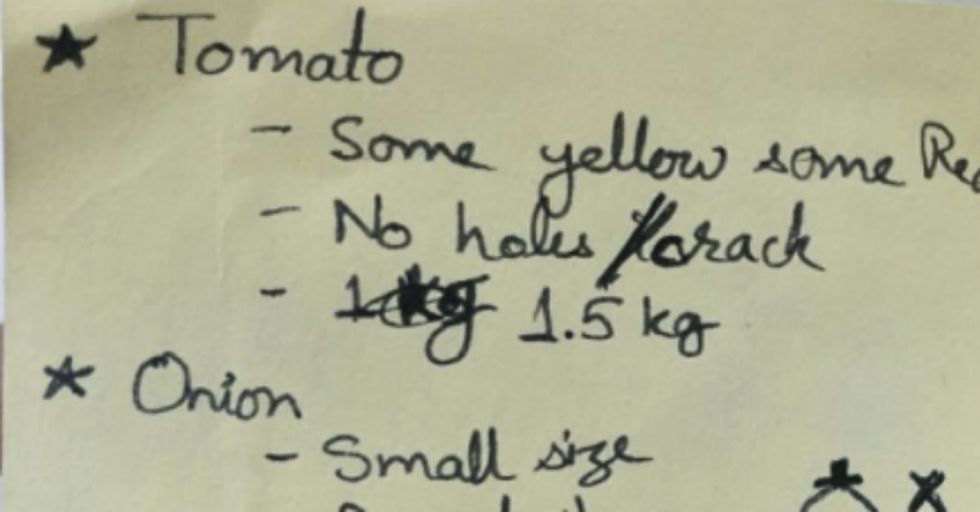 For most of us, grocery shopping is a mundane task. Wading through fully stocked isles, remembering to bag the ground beef, and standing in line to checkout all lack an appeal to the more exciting side of life. But it has to be done, and if you're the one who does the majority of the shopping, you probably have it down to a science.

On the off chance you have to send a spouse or a friend, things can get tricky though. Will they buy the right toilet paper? Do they know the type of off-brand graham crackers you like?

In a grocery list that's now gone viral, one woman made sure that when she sent her husband to the store, he sure as heck was coming back with exactly what she asked for.

No one likes receiving the unpleasant surprise of not getting anything they asked for.

Nothing's more irritating than looking forward to the exact type of ground coffee you rejuvenate yourself with every morning, only to realize your spouse just walked into the house with something unrecognizable. Trying to be laid back is good in theory, but when it comes to that specific item you needed, it's back to the drawing board.

We can't be sure, but it seems like the author may have been burned before.

We've all been in that frustrating, why-didn't-I-just-go-myself zone, and it's excruciating. Judging by the specifics of the viral list, we think there's a good chance Twitter user, Era Londe, had received an incorrect item in the past. Most of us would simply buckle down and drag ourselves back to the store, but she had better plans.

Obviously loving, yet very specific, Londhe sat down to pen one of the most thorough grocery lists we've seen... literally ever. No detail was spared, leaving the recipient almost no room for excuse, if he brought back the wrong item. And we mean no excuse.

Some people think it's cute to pop everything in a text and throw in a heart emoji as an afterthought. Instead, Londe's husband held the the world's most comprehensive way to shop for vegetables. Unlike many other husbands, he couldn't throw out the pretense of not knowing quite what a ripe onion looked like.

With word of the list rapidly spreading through social media, the contents of the note were quickly lauded as, not only admirable, but, perhaps, imbued with a smidgen of professionalism. It was obvious that Londhe knew her stuff. Twitter user, @MohitRajabhoj, put it the best. But that wasn't all...

Londe posted this picture of her list on Twitter. Upon first glance, it seems like she added cute doodles of vegetables for fun. Closer examination reveals that they're actually VEGETABLE SPECS. Major key. There's no mistaking that returning with the wrong cooking ingredients wasn't even an option.

Our own reaction mimicked everyone else on the internet.

It's hard not to give props to Londhe. The time it took to map out, draw, and double-check the details for this list is admirable. Most of us feel pretty good if we grab the Post-it note that has milk scrawled across it off the counter. That is, if we remember to grab the list at all. Why is that always so hard?

Social media users only had shining reviews of the detailed grocery list.

A lot of other shoppers seemed to acutely feel what Londhe had been going for when she created the list. Twitter user, @TheRealMrSsudsy, found a lot of solidarity in the note, seeing as she'd had to do the same thing herself.

For others, the drawings were the best part.

The overall list is compelling, to be sure, but without the charming doodles, this fabulous piece of grocery art would certainly lose some of its appeal. (No pun intended.) The humor wasn't lost on Twitter user, @GeorgeJFox, who was quite smitten with the potato illustrations. Admittedly, spuds in sequential order are adorable.

As a follow-up Londe put out some bonus material.

Delighted with the reaction to her work, Londhe put out a "key" to the original list. It seems that so many people were curious about the specifics of the note, Londhe was kind enough to contribute additional information for inquiring minds. Many of the vegetables on the list were new to quite a few people.
Fans of Londhe had nothing but love for the likeable cook's answers to specific veggie questions. Judging by the response, it's safe to say that other social media users have been braving the same struggle, when it comes to sending their significant others to the grocery store. After all, marriage is for better, worse, and if the love of your life brings home the wrong type of tomato.

There's no doubt about it, this chef has her stuff together.

Perhaps Twitter user, @caharshpunjabi put it best by simply posting this standing ovation. We have to agree, if this particular grocery list is any indication, Era Londhe is lucky in life, love, and amazing ways to cook produce. So the next time you look down in your shopping cart and see someone's leftover list, don't be surprised to find teeny, tiny vegetables drawn on it.