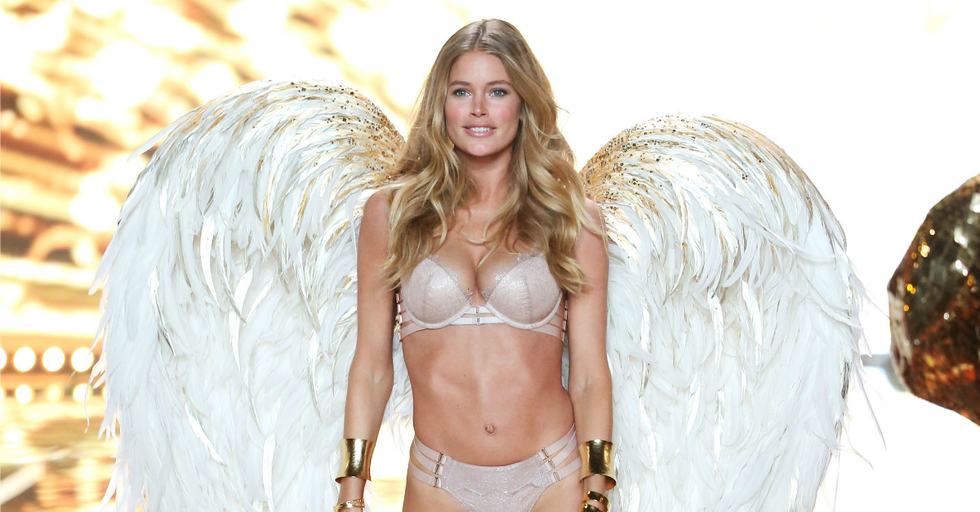 This Secret About Swimsuit Models Is Blowing Womens' Minds

Ever tried on a swimsuit top expecting to look straight out of a Victoria's Secret catalog, only to end up looking rather... deflated?

Well, get ready to feel a whole lot better about your figure, because a bombshell was just dropped on Twitter and women everywhere are collectively saying the same thing: Why didn't we know this earlier?!

"I can't wait to try on swimsuits!" said no woman ever.

Regardless of your body type, swimsuits have an uncanny ability to look 100% worse on you than they do on models. So what gives? Is it just due to the ridiculously perfect bodies of supermodels? Or is some kind of witchcraft at play here?

While we all know that model's bodies are photoshopped into oblivion, there is one sneaky trick photographers use in order to perfectly fill out those cups. And it's something that, if we'd only known, would have saved us a lot of heartache during our formative years.

Yep. It turns out, their seemingly perfect boobs were a lie this whole time. And here we were, beating ourselves up for looking lackluster in comparison.

Dozens of users responded with dumbfounded comments. "I hadn't realized that either," one woman said. "Shit, I feel a whole lot better now."

Trimboli went on to expand on her discovery in the comments.

It turns out that even supermodels don't have perfectly round and perky boobs that stay up all on their own. Who knew?

And they're not just normal, everyday, minimal-padding bras, either.

The bras these ladies are sneakily wearing are the majorly padded, extreme push-up, in-no-way-representative-of-your-actual-boobs type bras that we tend to only pull out for special occasions.

Upton's bra size is rumored to be a 34D. Large-chested ladies know all too well that breasts that size don't usually stay upright on their own.

Upton even commented on her chest size once to The Sun.

"I wish I had smaller boobs every day of my life as I would love to wear spaghetti tops braless and go for the smallest bikini designs," Upton said.

While the revelation was a big relief to many, we're sure there are a huge number of women out there who never have an issue with how they look in swimsuits.

If you're one of the many who saw this and thought "big whoop," we applaud you. But the sad truth is that our society perpetuates the idea that women have to be perfect, and it can be quite damaging.

If this little tidbit teaches us anything, it's that NONE of us is perfect.

No matter what we look like, we should be able to flaunt what we've got however we want to, without shame. Because it's pointless trying to achieve the impossible.

Trimboli ended her thread with some very wise words.

"Teach your children well", she said. Let's start teaching our girls the importance of self-respect, and remind them to stop equating their self-worth with what they see in the mirror.