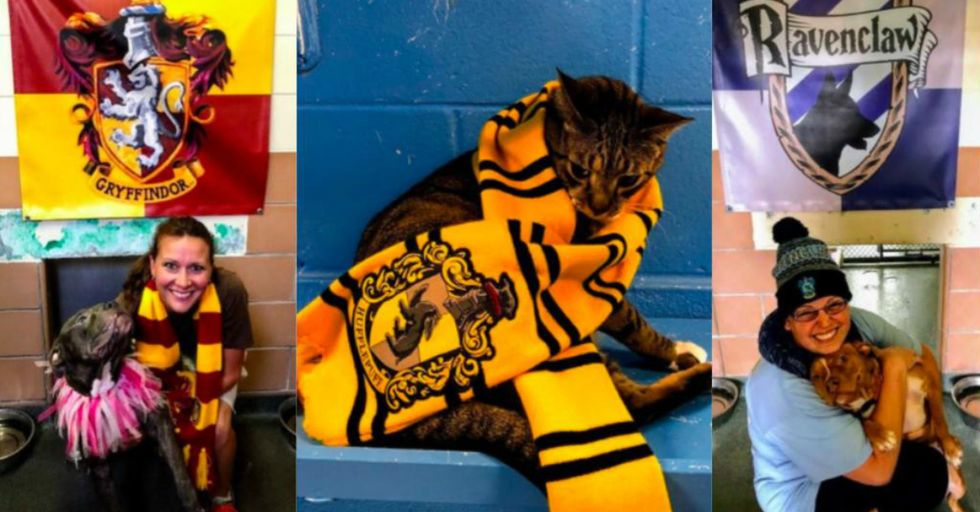 Have you ever thought about which Hogwarts house you're in? Whether Gryffindor, Ravenclaw, Hufflepuff, or Slytherin, there's probably one that best represents you.

And what about your pets? OK, mostly dogs, because let’s face it, 90 percent, of cats are Slytherins (don’t @ us. Every cat, no matter how sweet, is ambitious, shrewd, cunning, and has the capacity for evil — you know it in your heart).

A shelter in Florida has decided the best way to let visitors know about the personality of their adoptable dogs is by doing just that: sorting them into Hogwarts houses.

People were often coming into the shelter and asking which breeds different dogs were, instead of asking a more important question: what were the dogs like?

They decided to create a system to tell people about the dogs’ personalities.

Some of the people who worked at the shelter commented on how it would be much easier to tell people about the dogs if they could just sort them into houses based on their personalities, like at Hogwarts.

They thought, why not sort the dogs?

They decided that Hogwarts was onto something. They started having a behaviorist work with the dogs and sort them according to their personality traits. They call it  “Pawgwarts."

The dogs are sorted according to the four houses, but with a twist.

Instead of Gryffindor, Ravenclaw, Hufflepuff, and Slytherin, they appropriately changed the names to suit a more canine cohort. The dogs are sorted between Gryffindog, Hufflefluff, Ravenpaw, and Sloberin. So cute!

But the traits each house represents are the same.

Gryffindogs are brave and friendly, Hufflefluffs are hard-working and kind, Ravenpaws are clever and creative, and Sloberins are cunning and ambitious.

All the dogs get ID cards and banners in their kennels that announce their house.

It’s really, really adorable. The shelter even has even have a test on its website so you can see which house your dog is in.

They hope the system will help get more dogs adopted.

The shelter said "The idea for Pawgwarts came about from the need for people to see our dogs, based on their behavior and personality, rather than appearance. With 1,800 dogs surrendered based on breed-related restrictions, we want to transform the way people view a dog, when thinking about adoption."

There can be a lot of bias around breeds.

By sorting the dogs according to their traits and not their breeds, the shelter hopes it will help potential adopters see all the dogs for who they are, rather than being judged by their breed. Some breeds, like pitbulls and other “bully breeds," tend to have a tougher time getting adopted, even if they're great dogs.

The shelter doesn't sort the cats.

The shelter also has cats, but they decided against trying to sort them since they didn't seem particularly enthusiastic about the process  — and all cats are Slytherins. (OK, they didn’t say that last part, but it’s true).

The program has been very successful.

According to the shelter, adoptions are up 15 percent since the program began in October. Looks like Sirius Black isn’t the only dog to have graduated from Hogwarts! Yay dogs!