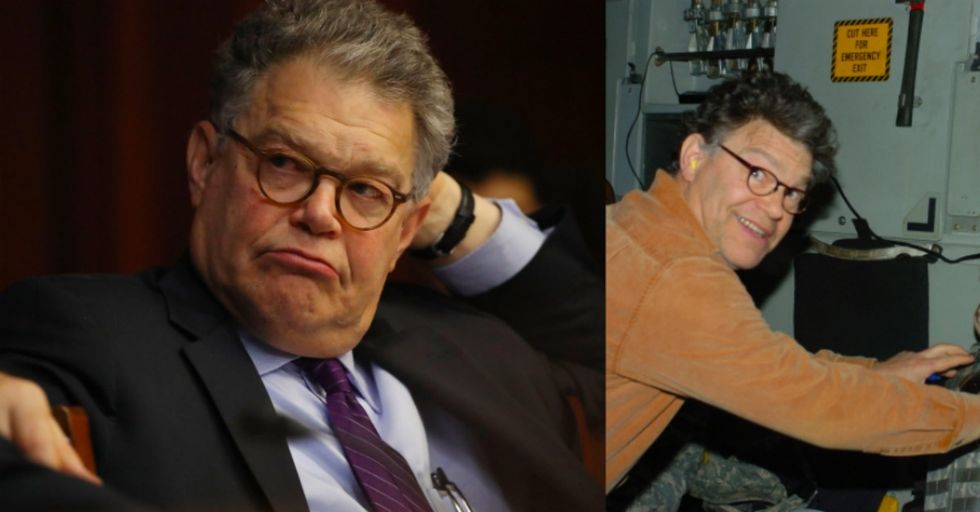 Stop having heroes, everybody! The age of being able to look up to men has officially come to a close now that Senator Al Franken — who by all public accounts until now has been a progressive champion of women's rights — has been accused of groping and kissing a woman without her consent. Comedy heroes, titans of their industries, and powerful politicians are dropping like flies as we realize that everyone is terrible and sexual harassment and assault are so much more prevalent than we gave it credit for.

Minnesota Senator Al Franken has sort of kind of not really apologized after broadcaster and model Leann Tweeden accused him of sexual assault.

In an essay published for Los Angeles radio station KABC, Tweeden described how Franken "forcibly kissed" and groped her when they were both on a USO tour in the Middle East in 2006 — two years before Franken was elected as a Democratic Senator in Minnesota.

Tweeden explained that she was a TV host, sports broadcaster, and well-known model at the time. She expected to emcee and introduce the skits and the acts during the show.

However, Franken said he had written a part for her "that he thought would be funny," and Tweeden agreed to play along.

"When I saw the script," Tweeden wrote, "Franken had written a moment when his character comes at me for a 'kiss.'"

"I suspected what he was after, but I figured I could turn my head at the last minute, or put my hand over his mouth, to get more laughs from the crowd." But then, Franken insisted on rehearsing the kiss. Tweeden tried to brush him off, but he insisted. "He repeated that actors really need to rehearse everything and that we must practice the kiss," she wrote. "I said ‘OK’ so he would stop badgering me. We did the line leading up to the kiss and then he came at me, put his hand on the back of my head, mashed his lips against mine and aggressively stuck his tongue in my mouth."

When they actually performed the skit, Tweeden turned her head so he couldn't kiss her on the lips. Tweeden said she didn't report the incident at the time. She "didn't want to cause trouble." Sound familiar? But that wasn't the only horrific incident Tweeden suffered at the hands of Franken...

When the tour wrapped and they were on their way home, Tweeden fell asleep on the plane after it left from Afghanistan. She didn't see this horrific photo until she was back in the U.S.:

KABC anchor: Senator Al Franken Kissed and Groped Me Without My Consent, And There’s Nothing Funny About It… https://t.co/fdC4GkUxV6
— Meridith McGraw (@Meridith McGraw)1510845748.0

"I couldn't believe it," Tweeden wrote. "He groped me, without my consent, while I was asleep. I felt violated all over again. Belittled. Humiliated."

Tweeden expressed that despite her fury, she still felt she couldn't come forward.

She wrote, "I wanted to shout my story to the world with a megaphone to anyone who would listen, but even as angry as I was, I was worried about the potential backlash and damage going public might have on my career as a broadcaster." Vilifying victims of sexual assault is one of the most damaging things we've done to women in our society.

"But," Tweeden wrote, "that was then, this is now. I am no longer afraid."

"I'm telling my story because there may be others... "I want the days of silence to be over forever."

Leann Tweeden did an incredibly brave thing by coming forward.

Any level of discomfort you feel when reading about the shitty actions of people you admire(d) pales in comparison… https://t.co/VWY9rO9pll
— joel tyler (@joel tyler)1510847158.0

It's so hard to share your story, and it has to be even harder when your abuser is widely regarded as a progressive voice for women. Franken made a half-hearted non-apology statement obtained by People: "I certainly don't remember the rehearsal for the skit in the same way, but I send my sincerest apologies to Leann. As to the photo, it was clearly intended to be funny but wasn't. I shouldn't have done it." Yeah, Franken. There are a lot of things you shouldn't have done.

Since that statement, Franken has released a longer apology:

"The first thing I want to do is apologize: to Leeann, to everyone else who was part of that tour, to everyone who has worked for me, to everyone I represent, and to everyone who counts of me to be an ally and supporter and champion of women. There's more I want to say, but the first and most important thing — and if it's the only thing you care to hear, that's fine — is: I'm sorry. "I respect women. I don't respect men who don't. And the fact that my own actions have given people a good reason to doubt that makes me feel ashamed. "But I want to say something else, too. Over the last few months, all of us — including and especially men who respect women — have been forced to take a good, hard look at our own actions and think (perhaps, shamefully, for the first time) about how those actions have affected women. "For instance, that picture. I don't know what was in my head when I took that picture, and it doesn't matter. There's no excuse. I look at it now and I feel disgusted with myself. It isn't funny. It's completely inappropriate. It's obvious how Leeann would feel violated by that picture. And, what's more, I can see how millions of other women would feel violated by it — women who have had similar experienced in their own lives, women who fear having those experiences, women who look up to me, women who have counted on me. "Coming from the world of comedy, I've told and written a lot of jokes that I once thought were funny but later came to realize were just plain offensive. But the intentions behind my actions aren't the point at all. It's the impact these jokes had on others that matters. And I'm sorry it's taken me so long to come to terms with that. "While I don't remember the rehearsal for the skit as Leeann does, I understand why we need to listen and to believe women's experiences. "I am asking that an ethics investigation be undertaken, and I will gladly cooperate. "And the truth is, what people think of me in light of this is far less important than what people think of women who continue to come forward to tell their stories. They deserve to be heard, and believed. And they deserve to know that I am their ally and supporter. I have let them down and am committed to making it up to them."

"The apology, sure I accept it, yes. People make mistakes and of course he knew he made a mistake. So yes I do accept his apology," she said.