Sometimes you have to accept when you've been outwitted. | 22 Words 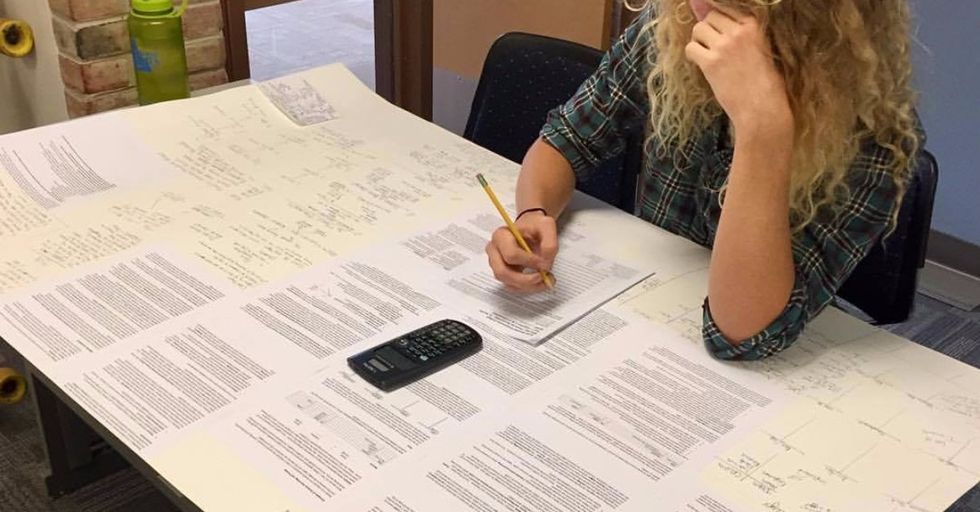 This Smartass Student Found a Giant, Note-Card-Sized Loophole in Their Teacher's Rule — and Got Away with It

Some people find the smallest opening and take full advantage of it. A community college teacher recently discovered this when he allowed his students to bring in a 3x5 reference notecard for an accounting exam.

But one student took advantage of the situation, in a creative and highly courageous manner...

Accounting professor Reb Beatty instructed students that they may bring in a 3x5 card of notes for a test. He didn't expect this.

Beatty posted the photo to his Facebook and Instagram accounts applauding the student for his clever take on the instructions. He said, "First test day of the semester and as always, I allow a 3x5 notecard. Today, a student shows up with this. Sure enough, it is 3x5... feet. As precise as I am, apparently I never specified inches and therefore yes, it was allowed. Well played and lesson learned for me.  @elijahbowen_ #aacc #audacious#professorlife #accounting #winner" Of course, internet people had opinions.

While most responders (nearly 6,000 and counting) laughed along with Beatty, some were distracted.

Generally people find funny things funny. But there's always the people who get sidelined by nonsense. In this case, many people debated the sex of the student, which is irrelevant but I guess long hair is confusing. And many, many people decided that allowing a notecard at all was poor form.

Thank goodness for internet strangers who tell us what we're doing wrong in our lives.

In response to the comments, Beatty updated his post with this, "Edit (22 September, 4 pm): With all of the attention that this has received, I wanted to clarify a couple of things: (1) Using a 3x5 inch (or foot) card/poster in an accounting course is just as much - if not more - a preparatory tool than a test aid. The approach is that the process itself will force the student to organize his/her thoughts, put material into terminology that he/she understands, et cetera. It is NOT cheating, or going easy on students, or however you want to reference it. An accounting exam, designed effectively, requires application of concepts and proficiency in the material, not just regurgitating facts. In a time-sensitive environment (such as this), a student will not be successful, regardless of the size of test aid, if he/she cannot apply concepts to various practical situations. I have allowed note cards for years and have had a perfect raw score on this particular exam MAYBE once or twice (none in the past two years, and that's as far back as I checked). (2) This student is a male, not a female as referenced by many."

Sometimes you have to accept when you've been outwitted.

The clever student won that round, as is only right, and Beatty will surely specify inches for his next exam. However, students don't always win when they try to be clever with their school work.

What do you do as a teacher when you get this answer? Whether someone is purposefully being a smart ass, or they are simply extremely literal or entirely obtuse, the results are hilarious. Here are 6 times when being literal won the day...

Just try to grade this, teach.

Well, this is literally what a letter of a Chinese immigrant would have looked like.

Slow clap for this guy.

The extra effort that this guy put in for the sake of his joke tells me that his wife is a saint or he's single now.

I could watch this all day.

Some people are literally the most literal.

There is no way to word instructions to ensure this kind of thing doesn't happen once in awhile.

Is there any way that the cake decorator didn't do this to be a jerk?

I know that some people are literally the most literal, but come on! The cake decorators know that we don't want the words "in blue" written on the cake, right??

Sometimes you get exactly what you ask for.

Whether people are being clever, far to literal, or pain stupid, the end result is hilarious.

Thank you, internet people, for sharing these things with the rest of us when they happen.