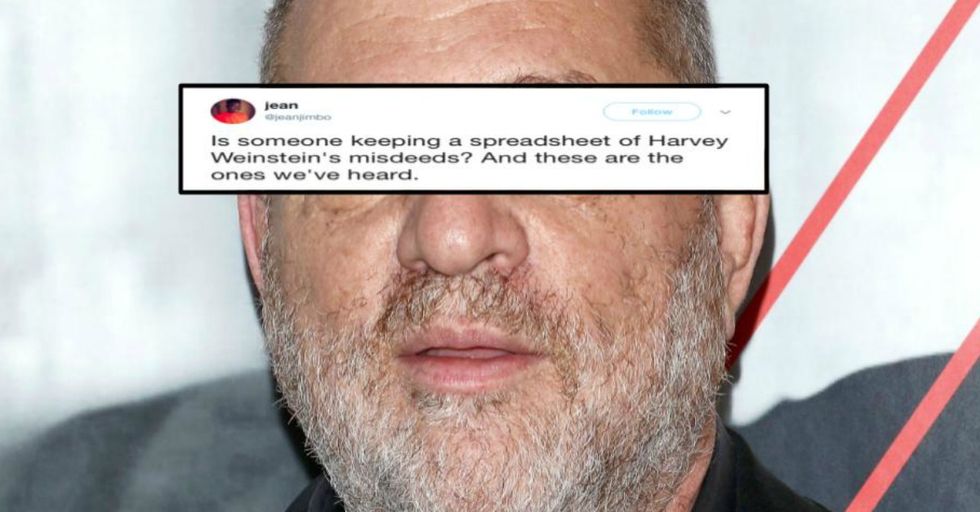 Former Hollywood mega-producer Harvey Weinstein has been constantly in the news the past month for harassing, assaulting or raping countless women over the span of the past 40 years. The allegations first came to light when the NY Times published an article detailing Weinstein's assaults on actresses and his subsequent coverups. In the time since the allegations were published, new details have emerged, including the fact that Weinstein paid private security companies to stalk and harass his victims.

Now, Asia Argentina, one of Weinstein's primary accusers, has published a spreadsheet detailing his depravations.

The accounts are, in a word, horrifying.

The Google Doc lists nearly 100 instances of sexual assault dating back to the 1970s, when Weinstein was beginning to make waves in the film industry with his company, Miramax. Some accounts are almost unbearable to read.

Each allegation also lists Weinstein's accomplices, a few of whom popped up again and again.

Italian procurer Fabrizio Lombardo, for instance,  is mentioned multiple times, as are unnamed assistants. What is clear from the spreadsheet is that while Lombardo seems more like a collaborator, the assistants were as much victims of Weinstein as his other accusers. In fact, most people who worked with Weinstein suffered in one way or the other.

In one account, Paul Webster, head of production for Miramax from 1995 to 1997, describes the atmosphere of terror and paranoia working for Weinstein.

The "sex allegations are just the particularly rancid tip of the iceberg," Webster said. "Miramax was absolutely a cult, the cult of Harvey, and that’s how he got away with his behaviour for so long... It was crude but very effective. People became brainwashed, some people had nervous breakdowns. People would be hired and then destroyed for no apparent reason, and then their careers and lives would be in tatters." He continued by saying, "Everything Harvey did was all about manipulation and fear. He was a massive bully. He would flatter people, get the best out of them and then dump on them really, really hard to destroy them. It was this whole thing of breaking people down so you could build them up in your own image."

Webster also says that Weinstein's behavior towards women was commonly known at Miramax, but the bullying at the company made Weinstein's employees "compartmentalize" it.

"it’s that pattern of bullying behaviour combined with the sex stuff. I can say now I did think he was a rapist," Webster said. Other former employees agreed and describe having post traumatic stress disorder afterwards.

Even worse were the anecdotes of the accusers.

Annabella Sciorra says that she had been struggling to speak about Harvey Weinstein for more than twenty years. https://t.co/N1gJyRUY11
— The New Yorker (@The New Yorker)1510182028.0

Mimi Haleyi, a former production assistant for the Weinstein Company said "Weinstein 'orally forced himself' on her after pinning her on to a bed and removing her tampon." Juliana de Paula, a studio manager, says "Weinstein groped her and forced her to kiss other models at his New York loft 10 years ago. She added that when she tried to leave, he chased her around naked, and she had to fight him off with broken glass. 'He looked at her and he started to laugh,' Juliana witnessed three other women be raped that night."

Weinstein's depravity is described in excruciating detail by some.

And there was an added cost for saying no to Weinstein, or going against him.

I know a lot of women are coming forward about sexual harassment in the wake of Harvey Weinstein. I hope it is not… https://t.co/SjuMDcuSFZ
— Amy Kaufman (@Amy Kaufman)1509542108.0

In Hollywood, Weinstein had the power to make or break careers, and he wielded that power viciously.

One actress describes how both she and her boyfriend being barred from Weinstein movies after she declined to go to the bathroom with the producer. Another had this to say. "Her refusal to attend a private dinner with Hollywood producer Harvey Weinstein cost her a Hollywood career. She was asked by an intermediary to go out for dinner with a producer she had never heard of, at the time. It was more of a demand rather than a polite invitation", she declined the invitation. It cost her..Weinstein asked that she should immediately leave the country and that she should not be able to work in the US again." As the case against Weinstein continues unfurling, one thing is clear. People NEED to start believing women, so predators like this can't operate unchecked ever again.