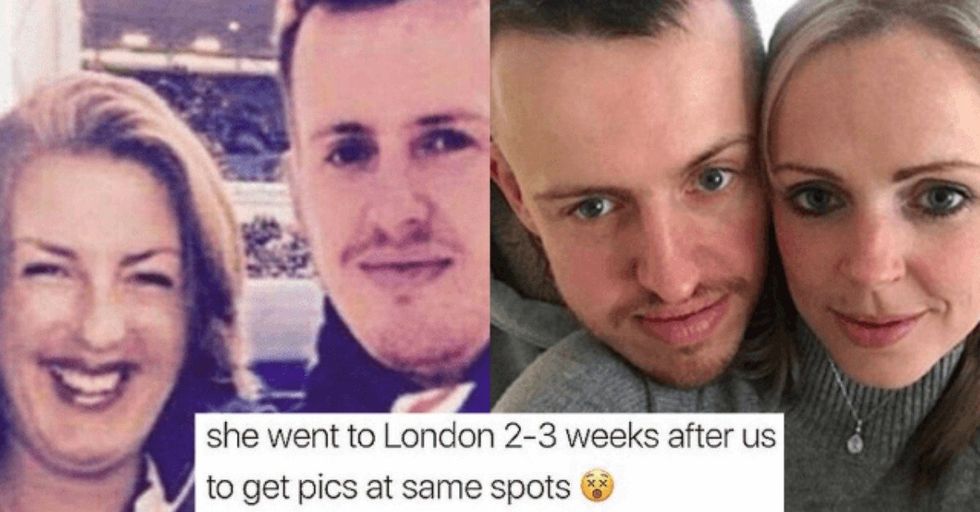 This Creepy Woman Photoshopped Herself Into a Stranger's Photos For YEARS

That is an impressive level of commitment, to say the least.

It began with Sharp photoshopping pictures of McQuet and his real girlfriend, Marianna Stirling, to look like photos of herself and McQuet.

She would then share them on social media. Eventually, she upped the ante and told people the two were engaged to be married.

To add authenticity to this deep web of catfishing, Sharp created a fake Twitter account for McQuet (under a new, false name)

She even started acting as both sides, and wrote long and romantic messages back and forth.

In perhaps her creepiest move, Sharp went so far as to meticulously retrace the steps of a trip the actual couple took to London.

Posing at each location, she made it look as if they were taking individual pictures of each other.

The plan seemed to be working until her close friends realized they had never met this mysterious man she had agreed to marry.

Upon closer inspection, their vacation pictures didn't match up either. As you can see, the ground in McQuet's vacation shot is darker than in Sharp's - likely due to one being taken on a rainy day and the other on a clear one. And people started to catch on.

"She put up a picture claiming they were having a weekend away in London but the two images were completely different,"

One friend told the Daily Record, "It was obvious it had been taken on a different day. So we started looking at her other images and it was evident in some of them they had been photoshopped."

Sharp's friends decided to track down McQuet, and contact him to find out the truth once and for all.

When they reached him, everyone was blown away.

McQuet revealed that he had no idea who Jill Sharp was and that he was, in fact, engaged to a woman named Marianne Stirling.

“It appears this woman followed them down to London, visited the same places, took photos, then photoshopped them," said a friend of the couple. "It's astonishing behavior."

After this bombshell discovery, McQuet's real soon-to-be-wife tweeted about this strange occurrence.

She explained that they had contacted local police, who claimed no legal action could be taken in this case.

Typically in investigations like this, the police can't do anything until an actual crime has been committed.

“The police have told them that no criminal activity has taken place, apparently she’s allowed to impersonate whoever she wants to impersonate," a friend said. "The police just weren’t interested." But the Jill Sharp saga doesn't end there.

Before eventually deleting her Twitter, Sharp went on a blocking rampage.

Probably to try to cover her tracks after she was caught red-handed, but the Internet never forgets.

One Twitter user shared some helpful screenshots of her tweets.

Some people found it pretty ironic that Sharp allegedly worked in mental health.

But if there is one thing Twitter loves more than creepy stories, it's memes.

So Graham and Jill's story pretty quickly got hilariously meme-ified.

Catfishing isn't a new idea by any means, but it's more commonly used to find a mate, rather than invent one to impress friends.

Sharp denies involvement in this impersonating scheme, but pictures don't lie. Here's hoping she finds her real Prince Charming in the future.