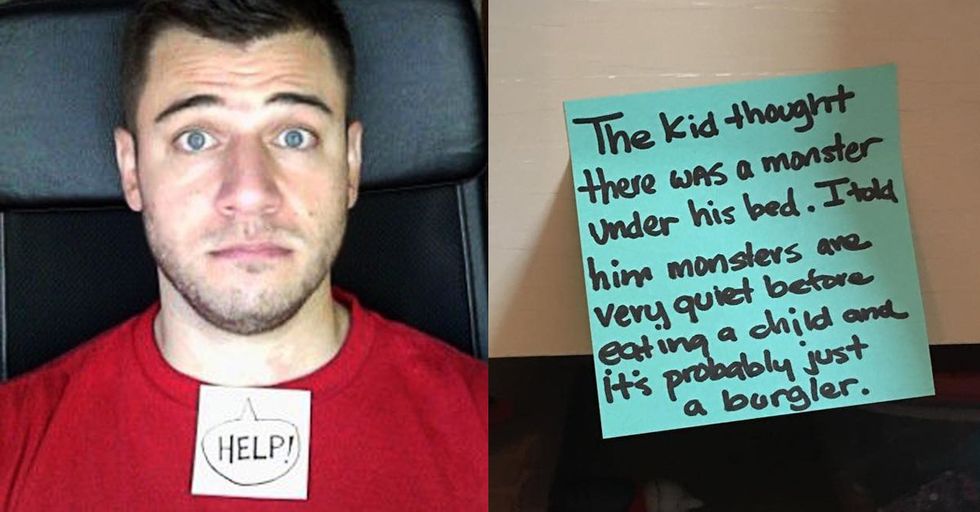 Daycare can be shockingly expensive; rather than mortgage their homes and sell a couple of their kidneys, many families find that it's easier on the budget for one parent to stay home with the kids, even when it means going from two household incomes to one. Plus, everyone gets to keep their kidneys! Yay!

This was the situation for Chris Illuminati, who became a stay-at-home dad when his son was born in 2010. Simply getting the title of "stay-at-home parent" didn't automatically mean his wife was totally comfortable with the situation, though.

Illuminati's wife, known as Permanent Roommate on his website, Message with a Bottle, couldn't help but remind him — repeatedly — of all the tasks he needed to take care of while running the house and caring for the baby.

"As a joke (because I’ve never taken anything in life seriously), I wrote down even the simplest of tasks and pinned it to my bulletin board," he explains. "I forgot all about the note. I also forgot to change the baby." The effort wasn't wasted, though, as those early notes gave rise to a popular tumblr, a Facebook page, and all the other fun trappings of sharing his hilarious parenting tips, observations, and brutally honest confessions online. Now, seven years (and another kid) later, those notes have also given rise to something else — viral Internet fame, which Illuminati calls "incredibly positive, humbling and borderline absurd."

His notes cover all sorts of parenting topics, like weaponized craft supplies.

Nothing makes a kid more accidentally stabby than a freshly sharpened colored pencil.

He reminds us about the rules of Parenting Karma.

Because parents know next time it'll be them searching the house top to bottom for little Timmy's lost lovey at bedtime. And we aren't above accepting a little pity.

He offers up solid parenting tips.

His notes even give voice to our deepest parenting fears.

Don't tell me you've never thought about it! But LOL-worthy observations aren't the only reason Illuminati's accounts are so popular.

He talks about milestones...

There are some notes about parenting philosophies.

And some about straight-up parenting feels.

One thing all the posts share, however, is that they're just downright relatable.

Every parent knows the kids are the ones in charge. There's no sense fighting it.

There's no sense fighting the bathroom struggle, either.

But we can commiserate about it! That's almost as good as a sanitized bathroom, right?

Illuminati's post-its strike the perfect balance between truth, humor, and a healthy dose of thank-goodness-I'm-not-alone in the day-to-day trenches of parenting.

Right down to the woes of bedtime.

We're betting that one day, when they're old enough to read the notes and understand what's up, his kids will find them as entertaining as we do. Assuming after this note they ever ended up getting any sleep again, ever.

Either way, parenting is tough — laughing about it makes it easier. And making jokes about our kids sure doesn't mean we love them any less!

Yup, even when we're daydreaming about locking them out of the house.

So, when will Illuminati ever stop sharing his posts?

No time soon, from the looks of things, and for that we parents of the Internet are pretty grateful.